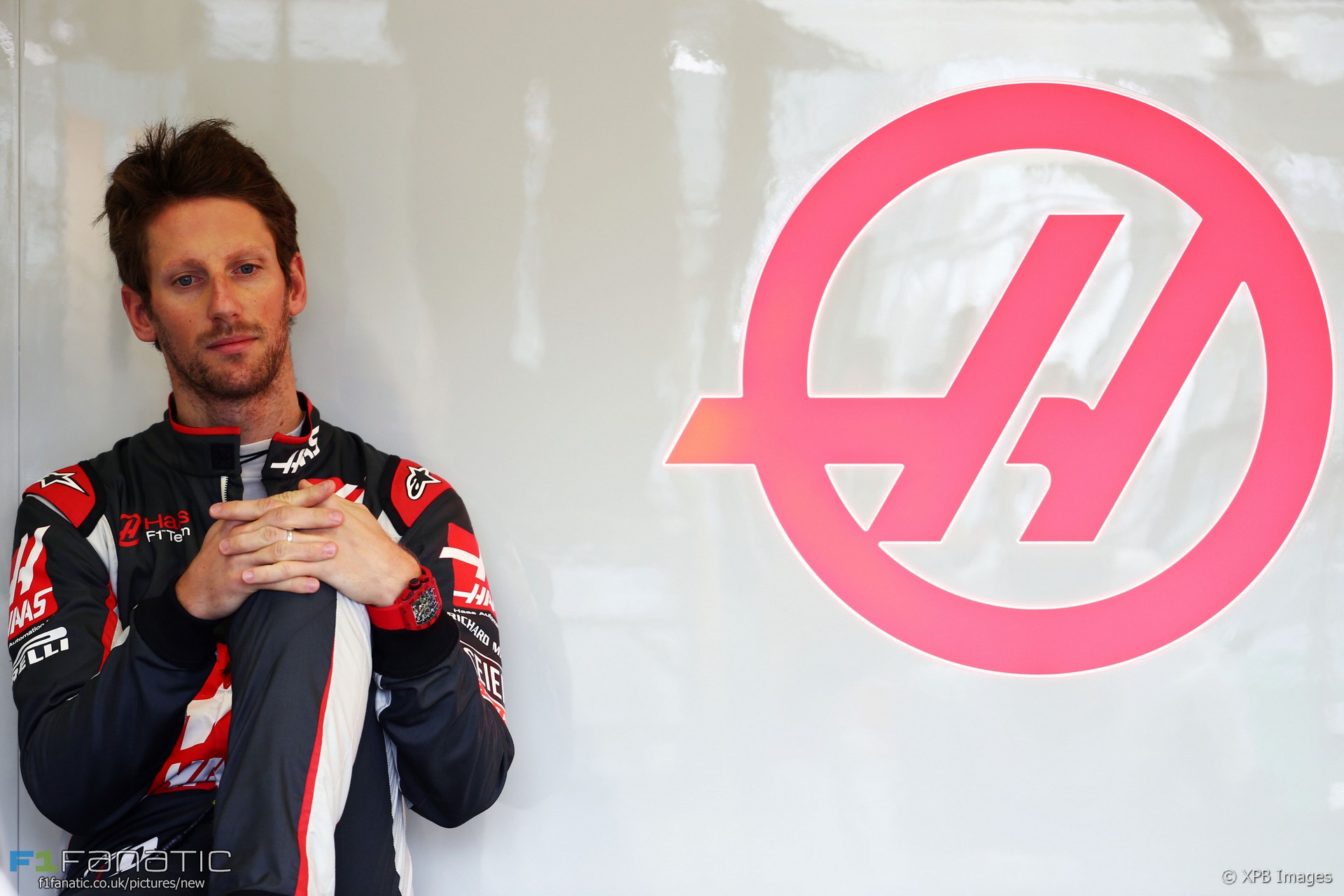 Two races into the 2016 campaign Romain Grosjean held fifth place in the drivers’ championship – a remarkable return on the first races for the new Haas team.

To the surprise of few the Haas drivers had dropped out in the first round under the short-lived elimination qualifying format. But from 19th on the grid Grosjean reaped the rewards of being able to change tyres during a red flag and, impressively, kept his Mercedes-powered rivals at bay on his way to sixth.

Incredibly he went one better in Bahrain and he did it using a completely different strategy. After narrowly missing Q3 the team threw all the fresh tyres it had at the car during the race as Grosjean three-stopped and scrapped on his way to fifth. He seemed set for a rewarding season.

From round three in China it was clear the fairytale was over for Haas. Braking problems plagued Grosjean, who during the race was so unhappy with his car’s balance he asked the team to retire him.

He salvaged ninth in Russia but a pattern was quickly being established: Grosjean was invariably dismayed by the car’s behaviour on Friday, more often than not eked a good lap out of it on Saturday, and his form on Sunday was dictated by whether or not he and the team managed to hit the sweet spot with the tyres.

This persisted for much of the season until the nadir was reached at Singapore. Following a power unit problem in the first session Grosjean crashed in second practice and qualifying, calling the VF-16 “one of the worst cars I’ve ever driven”. A brake-by-wire problem meant he didn’t even start the race.

Matters soon improved. A new front wing transformed the car at Suzuka and Grosjean planted it an excellent seventh on the grid, though the Williams drivers edged him out of the points in the race. A change of brake manufacturer also seemed to help and he again qualified seventh in Brazil, only to crash on his way to the grid.

This embarrassment aside, Grosjean emerged from a testing season with a good measure of credit as the only Haas driver to score points. But he’ll be eager for more next year.

On a whole, Grosjean’s season wasn’t that good. Especially towards the end, he didn’t seem to perform so well, and threw away a couple of good opportunities (like his spin in Interlagos before the start). Sometimes, he seemed puzzled by his slow pace (like in Singapore).

But he still succeeded in scoring some strong points for the new team. Not only that, he scored all the points for Haas, which in itself is quite an achievement.
@Dan_the_mclaren_fan

What’s your verdict on Romain Grosjean’s 2016 season? Which drivers do you feel he performed better or worse than? Have your say in the comments.

Australia – There’s no doubt Grosjean rode his luck to bring his Haas home sixth in the team’s first ever race, but it involved resisting pressure from a pair of Mercedes-engined rivals within DRS range for a sizeable chunk of the race. Grosjean made his sole required change of tyres during the stoppage and looked after his medium tyres well – he even began to pull away from Hulkenberg towards the end.

Bahrain – Haas could have made it into Q3 but Grosjean admitted he was pleased to lose the place to Hulkenberg, which meant he could start the race on new tyres. The team used that to great effect during the race, running three super-soft stints which allowed Grosjean to attack. Clearly revelling in the car, he took on and passed the likes of Massa and Ricciardo, though he had to settle for fifth behind the latter.

China – His points-scoring run for Haas was halted after first-corner contact damaged his front wing. Unhappy with his car’s balance from that point on. Grosjean urged his team to retire his car in the final laps.

Russia – Felt there was still something wrong with his car after his problems in China. Despite struggling to get the tyres working on the smooth track he made it into Q2, and at the start he dived for the escape road and emerged in a strong eighth. He lost a place to Magnussen in the pits which he couldn’t regain on the track, but added more points with ninth place.

Spain – Complained vociferously about his car during practice and reversed almost all of his recent set-up changes. Despite that he moved up to tenth at the start and points seemed to be a possibility again. However another front wing breakage sent him into the pits and he late retired with brake problems.

Monaco – Was beaten in qualifying by Gutierrez for the first time and blamed the Mercedes for holding him up in qualifying while he was trying to get heat into his tyres. His race was ruined when Raikkonen, who had just hit the barrier at the Fairmont hairpin, pushed him wide. That left him stuck behind Wehrlein, though the Manor driver’s penalties meant Grosjean was classified ahead.

Canada – Continues to be puzzled by the problems Haas are having with their tyres and lined up behind his team mate for the second race running. He went off at one point during the race and suffered another broken front wing on his way to 14th.

Europe – Despite heading down the escape road more than once in qualifying he took 11th on the grid. In the race he pitted earlier than planned for soft tyres due to rear graining on the super-softs, then was forced in again as his power unit temperature was increasing due to rubbish in his radiators. At this point Haas could only put him on mediums as they didn’t have any fresh soft tyres left. He came home 13th after passing Magnussen.

Austria – Slid into a gravel trap during Q2 and by the time his floor was repaired the rain had arrived and he was out. The start didn’t go well – he was squeezed wide and lost places – but he persevered long enough on his super-soft tyres that his eventual pit stop coincided with the Safety Car period. That moved him up to seventh, a position he kept despite a five-second penalty for pit lane speeding.

Britain – Like Force India, Haas seemed less comfortably in windy conditions. Both drivers found their cars a handful when the gusts picked up in Q2 – Grosjean had a moment at Stowe and had to settle for 13th. A transmission problem ended his race early.

Hungary – Nearly pulled off a shock in Q2: he was just one-tenth of a second away from knocking Hamilton out of the top ten. The race was a disaster, however: struggling with low-speed understeer, he slipped back to 14th place.

Germany – A water leak in second practice hindered his race preparation and a gearbox change penalty demoted him to 20th place. However using a two-stop strategy he climbed to seventh at one point and at the chequered flag he was only one place (and eight seconds) behind his team mate – a solid recovery.

Belgium – As is becoming increasingly typical Grosjean grumbled through practice but delivered the goods in qualifying, taking ‘new tyre poll’ after missing the cut for Q3 by three-tenths of a second. He took advantage of the La Source mess to rise up the order, only to run wide at Les Combes. By pitting him before the stoppage Haas made the mistake they avoided in Australia, and as he struggled for top speed in his second stint he couldn’t keep the quicker cars behind. His final stint was better, and he closed back up to his team mate.

Italy – At one of the team’s strongest venues for several races, a gearbox change penalty pushed Grosjean down to 17th on the grid. However a fine start and a pass on Wehrlein put him in contention for the points. Haas needed one of the five fastest cars to drop out, however, and it didn’t happen, though he resisted Button to the end.

Singapore – It was a dreadful weekend from the start for Grosjean. An engine air inlet leak sidelined him in first practice, he hit the barrier in the second session and he crashed again in qualifying. Having described the car as one of the worst he’d ever driven, he was spared having to do just that due to a pre-race brake-by-wire failure.

Japan – His braking problems continued on Friday, causing a minor off at Degner which damaged his front wing. However he was in great form in qualifying and had it not been for a DRS problem he might have started fifth. The Haas did not like the combination of worn soft tyres and a green track surface, but once he got the hard tyres on he was in great shape. Grosjean reckoned an earlier final stop could have earned him some points, and it looks like he was right.

Malaysia – A wheel jammed on his car during Q1 and although the team were able to loosen it the delay compromised his tyre preparation. Nonetheless he made it into Q2. The problems continued in the race, where a brake failure gave him a scare and put him out early in the running.

United States – Haas couldn’t replicate their Suzuka performance and were losing parts from their car – Grosjean said he only managed four clean laps on Friday. He then dropped out in Q1. However he made an aggressive start on super-softs, picking off Ericsson, Kvyat and finally his team mate for 11th. He and Button were in something of a stalemate in the final stint but retirements ahead promoted him to a point.

Mexico – His qualifying run was disrupted by Gutierrez spinning in front of him but his car’s performance was a greater concern, describing his starting position as “unacceptable”. The misery continued in the race where his car was pulling to the left in the braking zones and he finished a poor 20th.

Brazil – Switching to Carbone Industrie brakes produced a better feeling “right from the beginning” for Grosjean, but delivering seventh in qualifying was well above what the team expected. But Sunday was a crushing disappointment: crashing before the race has even started was a rare flashback to 2012-specification Grosjean.

Abu Dhabi – Friday was the usual blur of disgruntled radio messages and spins. A water pressure problem eventually forced him into the pits. The race went better – “there were some laps where my pace was amazing” – and he climbed to 11th place.