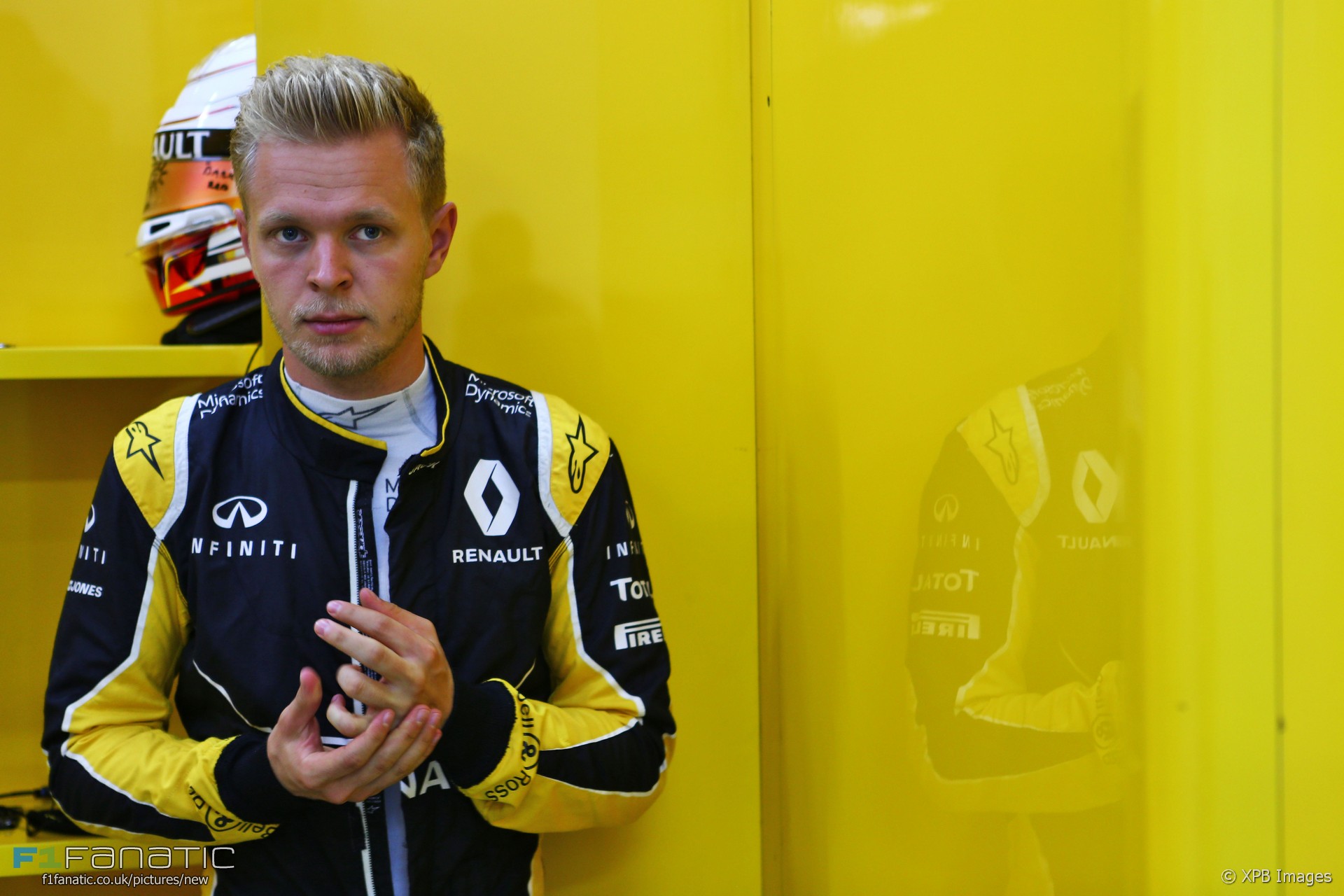 Kevin Magnussen seemed to be over-driving the Renault in his pursuit of points, to spectacular but not always rewarding effect.

The opening rounds offered some encouragement. Forced to start in the pits in Bahrain due to a pit exit infraction, Magnussen made up an impressive 11 places in the race, leaving him one why of a points finish.

The opportunity to score presented itself in Russia and Magnussen grabbed it. Having dodged the various lap one collisions he used an aggressive strategy to undercut Romain Grosjean and snatched seventh place.

After that promising start Magnussen increasingly found himself under pressure from team mate Jolyon Palmer. The pair clashed in Spain and Magnussen came off second-best.

Magnussen seemed desperate to snatch at any Russia-style opportunity to get in among the points scorers. When the track was wet he was invariably among the first to gamble on a switch to intermediates or slicks, Jean Alesi-style, despite the Renault’s downforce shortage.

He did so in Monaco and might have capitalised had he not been rammed by Daniil Kvyat. The same tactics didn’t serve him as well in Britain or Brazil.

Magnussen’s all-attack approach left little room for error. He was ragged at Monza as he strived to make it out of Q1 on a power track. He suffered heavy crashes in Canada and Belgium – the latter, notably, while trying to overtake his team mate.

By the latter stages of the year Palmer had become a persistent problem. Magnussen won the qualifying battle over the year but Palmer clearly held the upper hand over the final five races. This was a pretty fair reflection of their season.

What’s your verdict on Kevin Magnussen’s 2016 season? Which drivers do you feel he performed better or worse than? Have your say in the comments.

Australia – Having been pipped by Palmer in qualifying, first-lap contact sent Magnussen to the pits for a fresh set of tyres but the red flag allowed him to get back on the lead lap, albeit in last place. By the end of the race he was just 2.2 seconds behind his team mate.

Bahrain – Drove through a red light in second practice when being called into the weigh bridge. The team failed to notice the oversight and the result was Magnussen had to start the race from the pits. He made up 11 places in the race – as many as he could without earning a point. “We were so close to scoring points,” he said afterwards, “it’s frustrating to think what could have been had we not incurred a penalty”.

China – Renault were well off the pace in China and both cars failed to make the cut for Q2. Magnussen started 17th and finished there. “This isn’t a weekend that we will be very happy about.”

Russia – Didn’t run in first practice as Sergey Sirotkin drove his car, but looked the more comfortable of the two Renault drivers from the off. Couldn’t make the cut for Q2 but profited from the turn two incidents to run ninth. He gained another place by pitting before Grosjean and using the benefit of the undercut, and kept the Haas driver ahead to the end for a solid seventh place.

Spain – Was satisfied to reach Q2 while his team mate went out in the first round. However poor pace for both cars on the medium tyre forced Renault to use the hard at times – they were the only team to do so. Magnussen swapped his for softs at the end and had already passed Nasr oin his final lap when he attempted to pass Palmer too, causing contact which he was later penalised for.

Monaco – The winner of the Jean Alesi award for being the first driver to get rid of the wet weather tyres: Magnussen was in as soon as the Safety Car period ended. He clipped the barrier at Tabac which the lapped Kvyat took as an invitation to launch down the inside at Rascasse, causing contact. Magnussen hit the barriers again later and retired in the pits.

Canada – Hampered by a gearbox problem on Friday then crashed heavily in Saturday practice which kept him out of qualifying. Having started last in a newly-built chassis he tangled with Nasr on the first lap. Starting on the soft tyres, Magnussen found it hard to generate heat in them and was passed by Haryanto on lap seven. However he stuck to the strategy and one-stopping moved him up to 16th.

Europe – It was an excruciating weekend for Renault as both cars qualified at the back. Magnussen opted to start from the pits so he could change his suspension set-up and the move paid off – he made it up to 11th at one point before the Renault’s lack of speed was exploited by Button, Nasr and Grosjean.

Austria – A place in Q2 might have been possible but he slipped up at the final corner on his best run. His race chances were harmed by a five-second penalty for weaving in front of Wehrlein, which he admitted was “fair enough as I did move more than once and you’re not allowed to do that”. That dropped him behind his team mate, but once again this seems to have been a weekend where points weren’t on offer for Renault.

Britain – Took the Renault into Q2 and escaped censure for holding up Kvyat on his qualifying lap. Despite the car’s lack of downforce he switched to intermediates at the first opportunity but it didn’t pay off and he slipped to the rear of the field where he eventually retired with a broken gearbox.

Hungary – Both Renault drivers were compromised in the stop-start Q1 session and missed out on chances to progress further. Having qualified behind Palmer he lost time early in the race when Wehrlein passed him at the start, which ultimately wrecked his chances of jumping the Haas drivers at the first round of pit stops as his team mate did. Magnussen therefore spent the rest of the race reading Grosjean’s rear wing.

Germany – Palmer edged him by eight-hundredths of a second in Q1 which meant Magnussen progressed no further. In the race the team committed to a two-stop strategy and realised too late it had been the wrong way to go. He finished where he started: 16th.

Belgium – Despite taking a strong 12th on the grid he conceded his qualifying lap had been less than perfect. Both Renault made up places at the start but Magnussen slipped behind Palmer and lost control of his car in his team mate’s slipstream on lap six, ploughing into the barriers at high speed. Remarkably he was largely unhurt.

Italy – Back in the cockpit five days after his heavy crash at Spa, Magnussen said he was suffering no ill effects. He tried everything to get into Q2: getting a tow from Hamilton, and over-driving to the point of going off, and ended up two-tenths off Palmer as a result. An aggressive strategy left him with a 22-lap stint on super-softs at the end of the race, and the ease with which Ericsson left him behind indicates a better finish was unlikely.

Singapore – Renault’s hopes of reaching Q2 were dashed as Magnussen needed another four-tenths to do it. However he took full advantage of the first-lap collision to claim a place in the top ten. A long, 17-lap opening stint on ultra-softs opened up the possibility of finishing the race with two further stints on super-softs which was just the trick, and landed Renault’s second points finish of the year.

Japan – Both Renaults were in the top ten in final practice but couldn’t find the same grip in qualifying. Magnussen fared worst, dropping out in Q1. He gambled on starting the race on hard tyres, pitted once, and finished the race with an even longer, 27-lap stint on mediums. It lifted him ahead of Ericsson, Alonso and Sainz but meant his race was an unexciting exercise in tyre preservation.

Malaysia – Had a nasty scare on Friday when he car caught fire, but bounced back to claim a strong 14th on the grid. As a result he found himself caught up in the reaction to the Vettel/Rosberg clash, was hit from behind by Kvyat and damaged his front wing on the Haas of Gutierrez ahead. After a first-lap pit stop for a new wing he retired on lap 17 when his brakes overheated. Deserved more.

United States – Renault said Magnussen had been unable to get a clean lap in Q1, where he was eliminated. He quickly got ahead of Palmer at the start and late at the race his team advised him he could gain places by making a late stop for super-softs. This he did, and by passing Palmer, Ericsson and Kvyat he achieved the target the team had set him. But a post-race penalty for leaving the track while passing Kvyat demoted him back to 12th.

Mexico – Unlike Palmer, Magnussen had never driven on this track before, yet he was the quicker of the two in both Friday sessions and claimed a place in Q2. In the race he tried to use a set of super-softs for a late push but it didn’t pay off and he finished 17th.

Brazil – Lost his way with the car’s balance on Saturday and narrowly missed the cut for Q2. As usual he was one of the most fearless in the wet conditions and always among the first to gamble on intermediates. The conditions didn’t play to the tyres, however, and he finished well out of the points.

Abu Dhabi – Trailled Palmer in both Friday sessions after a water leak curtailed his running in the first and a flat-spot spoiled his soft tyre race simulation. In qualifying his plan to do three runs was interrupted by a trip to the weighbridge and he ended up behind Palmer again. He got off the line poorly and was almost last at turn one, and tangled with Wehrlein at turn eight. He pitted for repairs but had to retire soon afterwards.