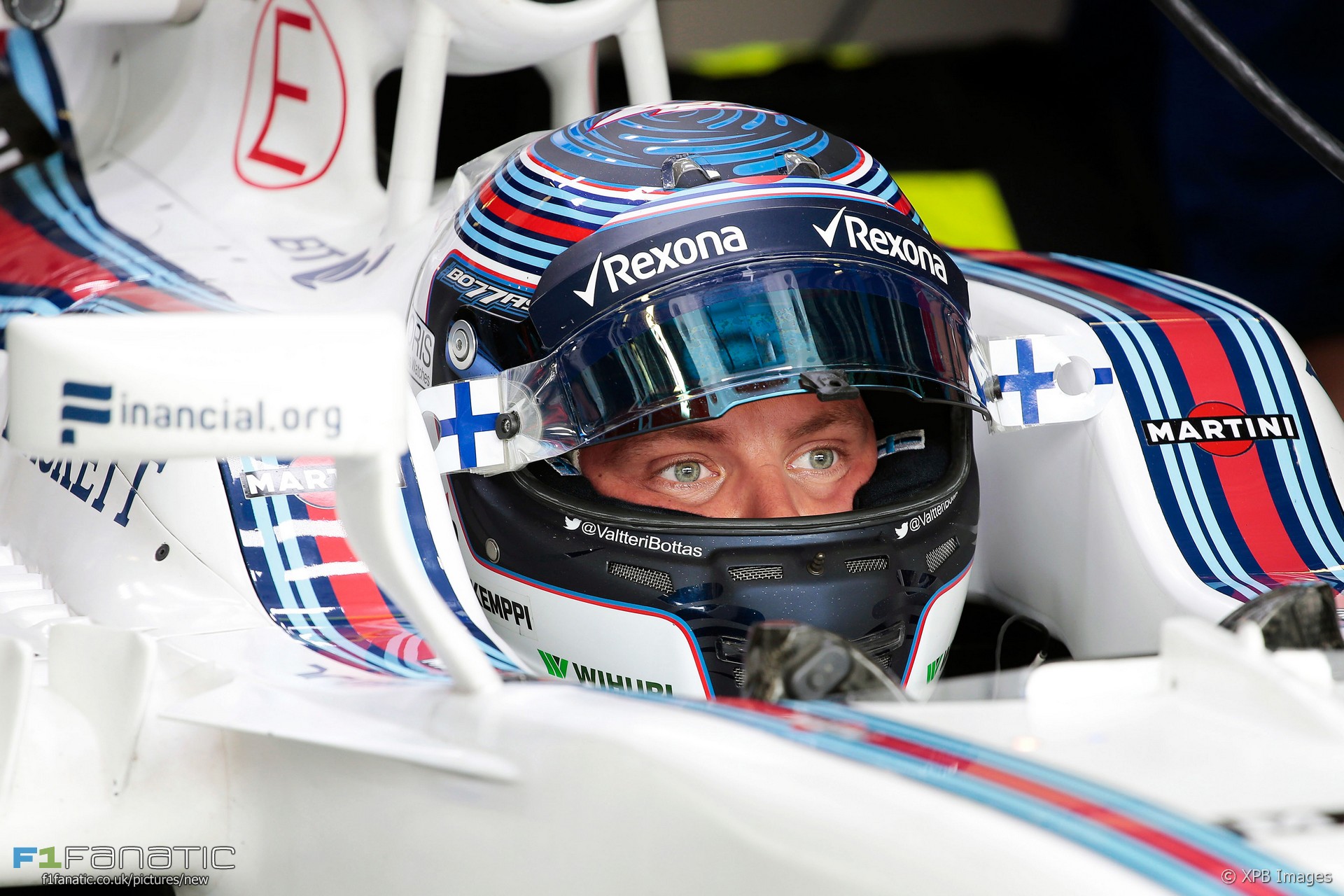 Valtteri Bottas destroyed his team mate in qualifying with a thoroughness no one else on the grid could match.

The season finale at Yas Marina was only the fourth time all season Felipe Massa beat Bottas in qualifying. And Massa’s four ‘wins’ included Baku, where damage from a broken drain forced Bottas out of final practice, and Sepang, where he had a problem with his engine settings.

The upshot was Bottas won 17 qualifying battles and might have had a couple more. And though he wasn’t quite as successful in the races he remained the leading points scorer for Williams. He also gave them their only podium appearance of the entire season, in Canada.

Bottas can usually be relied upon to stay out of trouble – particularly on the first lap, which often costs him. So his Bahrain run-in with Lewis Hamilton came as something of a surprise. As the rest of the season demonstrated, incidents like these were very much out of character for him.

But as Williams found themselves in retreat during 2016 so Bottas spent more time in the thick of the scrap for the lower reaches of the points. His consistent points-gathering was interrupted by the three wet races which exposed Williams’ greatest vulnerability of the past three seasons.

The team were locked in a scrap with Force India at the end of the season and Bottas shouldered more of the burden than his team mate. He led both VJM09s home in Malaysia. But a trio of late-season no-scores for Bottas helped tip the balance towards their rivals. These included two first-lap incidents in which he was blameless and a suspension failure at the season finale.

There were a few moments of less-heralded heroics in among his careful points-gathering. Out-qualifying Daniel Ricciardo’s Red Bull at Monza was an impressive effort, and he was brave to spend as much time as he did on intermediates in Brazil, for no reward.

Bottas did a quietly impressive job in 2016 and already looked more than ready to assume the role of team leader alongside Lance Stroll. But Mercedes’ urgent need to find a replacement for Nico Rosberg could lead to an exciting change of plan.

A good season for Bottas against a backdrop of a fading team-mate and a fading car competitiveness.

Must shake off the good-but-not-great moniker if he’s to move up. Rosberg did so, but can he?
@Montreal95

What’s your verdict on Valtteri Bottas’s 2016 season? Which drivers do you feel he performed better or worse than? Have your say in the comments.

Australia – Said he struggled for grip in qualifying and failed to make the eight-car cut for Q3. A gearbox penalty meant 11th on the grid became 16th, but by the time the chequered flag had fallen he had recovered all that and more to finish eighth. As is often the case he seemed to get crowded out at the start and lost a position. After that he produced a strong pass on Palmer and made the most out of a solid Williams strategy and a quick pit stop on his way to the points.

Bahrain – A much better qualifying performance than in Australia but not enough to keep Red Bull from beating Williams to fifth place. He made a stunning start followed by an uncharacteristically ambitious move on Hamilton which failed to pay off and earned him a drive-through penalty. Had much better pace than Massa on medium and soft tyres but ended up ninth.

China – Rob Smedley praised his run to fifth on the grid which, aided by the new front wing, seemed the best the Williams was capable of. Bottas was delayed by the first corner crash, however, and struggled for pace on the medium tyre in his final stint. Raikkonen and the two Toro Rosso drivers relegated him to tenth.

Russia – At a track which suited the Williams and its Mercedes engine, and where Bottas has been strong in the past, he delivered, splitting the Ferraris in qualifying to claim a place on the front row of the grid. Having dropped behind Raikkonen at the start he reclaimed the position with a rapid restart. However he lost time battling Hamilton after his first pit stop and was jumped by the Ferrari again, dropping to fourth.

Spain – Left Massa well behind as he took seventh on the grid. However a cautious run through the first two corner cost him places to Raikkonen and Sainz. He jumped back ahead of Sainz via the undercut, and although he probably wouldn’t have been able to keep Raikkonen behind it would at least have made his race more interesting. Picked up his pace too late in the final stint to pinch fourth from Ricciardo.

Monaco – Neither Williams driver made it into Q3, but a top ten start and Kvyat’s early problem made points a possibility for Bottas. However an early stop for intermediates dropped him behind Wehrlein, and by cutting the chicane as he passed the Manor Bottas left himself needing to let Wehrlein through along with Verstappen, who had just made a pass of his own. By the time the Manor had pitted Bottas had lost three places, and though a last-lap pass on Gutierrez restored him to 11th he was given a ten-second penalty for tangling with the Haas driver and moved back down the order.

Canada – A Montreal specialist, Bottas was happy with his car from the word go and put it seventh in the grid. He had great pace at the end of his ultra-soft tyre stint and was closing on the Red Bulls, which he eventually got in front of by pulling off a one-stop strategy, something few others managed.

Europe – Flew on Friday but was frustrated on Saturday. A drain cover damaged his car at the start of final practice, confining him to the pits for the rest of the session, and his final qualifying run was compromised when he caught Verstappen at the start of his lap. He crept up the order early on the race but couldn’t keep Hamilton behind him. But unlike his team mate he made a one-stopper work and took a decent sixth.

Austria – Felt he would have qualified better had it not rained – a Williams weakness of late – but was promoted to seventh by Vettel’s penalty. He lost two places at the start and struggled for tyre life in the race, slipping back to ninth.

Britain – As last year, the Williams looked a handful in the wet and Bottas found it more of a struggle than his team mate. He spun at Club and went off again later in the race as he plummeted from sixth to

Hungary – Given the difficulties Williams usually have in the wet, reaching Q3 was an achievement. He made it past Hulkenberg at the start but lost out in the race to the end against Sainz.

Germany – Promoted to seventh on the grid by Hulkenberg’s penalty, but was unable to keep the place in the race after the team gambled on sticking to a two-stop strategy. It didn’t pay off: Bottas was struggling way before the end of his final 33-lap stint which allowed Hulkenberg and Button to capitalise. Given the rate with which his pace was dropping off over 15 laps before the end it is mystifying that Williams didn’t pit him again.

Belgium – Felt he could have beaten the Force Indias in qualifying had it not been for the software glitch. He was one of several drivers to miss out on a free pit stop by coming in under the Safety Car before the red flag was shown, so having been fourth he was twelfth when the race resumed. His pace and tyre preservation over the final stint was much better than Massa’s and he took eighth.

Italy – Produced some brilliant laps in qualifying and his final one, where he found the six-hundredths of a second he needed to stop Ricciardo taking fifth place, was a gem. He also reaped the reward of taking the cooling vents off his helmet, which he reckoned was worth a thousandth. He was never going to keep Hamilton behind but he might have seen Ricciardo coming to deprive him of fifth, but he deserves credit for having the awareness not to turn in on his rival.

Singapore – Promoted to tenth on the grid by Perez’s penalty, he was hit by Button as both tried to avoid Hulkenberg’s crash on the first lap. He sank to the rear of the field and matters got worse when his seat belts came loose, forcing a lengthy pit stop. With temperatures rising the decision was taken to retire the car.

Japan – Said Friday was “straightforward” but neither he nor Massa were able to get the FW38 into the top ten shoot-out. After being dropped behind Massa through the pit stops he spent the final laps holding Grosjean at bay.

Malaysia – Owned up to an error with his engine settings in Q2 which probably cost him a place in the top ten shoot-out. However qualified 11th has its advantages, such as being able to start on new tyres, and Bottas took advantage of that to run a one-stop strategy. This jumped him ahead of the Force Indias.

United States – Beat Massa to eighth in qualifying but didn’t appear to have the pace to catch Hulkenberg. The pair collided at turn one in what was a racing incident, but it wrecked the day for both of them.

Mexico – Encouragingly inside the top ten during both Friday sessions and well ahead of Massa in qualifying. Despite slipping behind his team mate at the start he got ahead again but didn’t have the pace to catch Hulkenberg.

Brazil – Surprised and disappointed to drop out in Q2 after being beaten by Alonso’s McLaren and Grosjean’s Haas. He ran the intermediate tyres for longer than anyone else at the end of the race and impressively kept the show on the road despite slipping up on lap 59. Over the final laps he was on the pace of most of the front runners, but the chance for points had gone.

Abu Dhabi – After conducting engine and aero tests in first practice he got down to business in the second session and was quicker than both Force Indias. He couldn’t get more grip from the ultra-softs in qualifying and so went out in Q2. His race was a bit of a non-event: having made a good start a rear suspension failure ended his day.