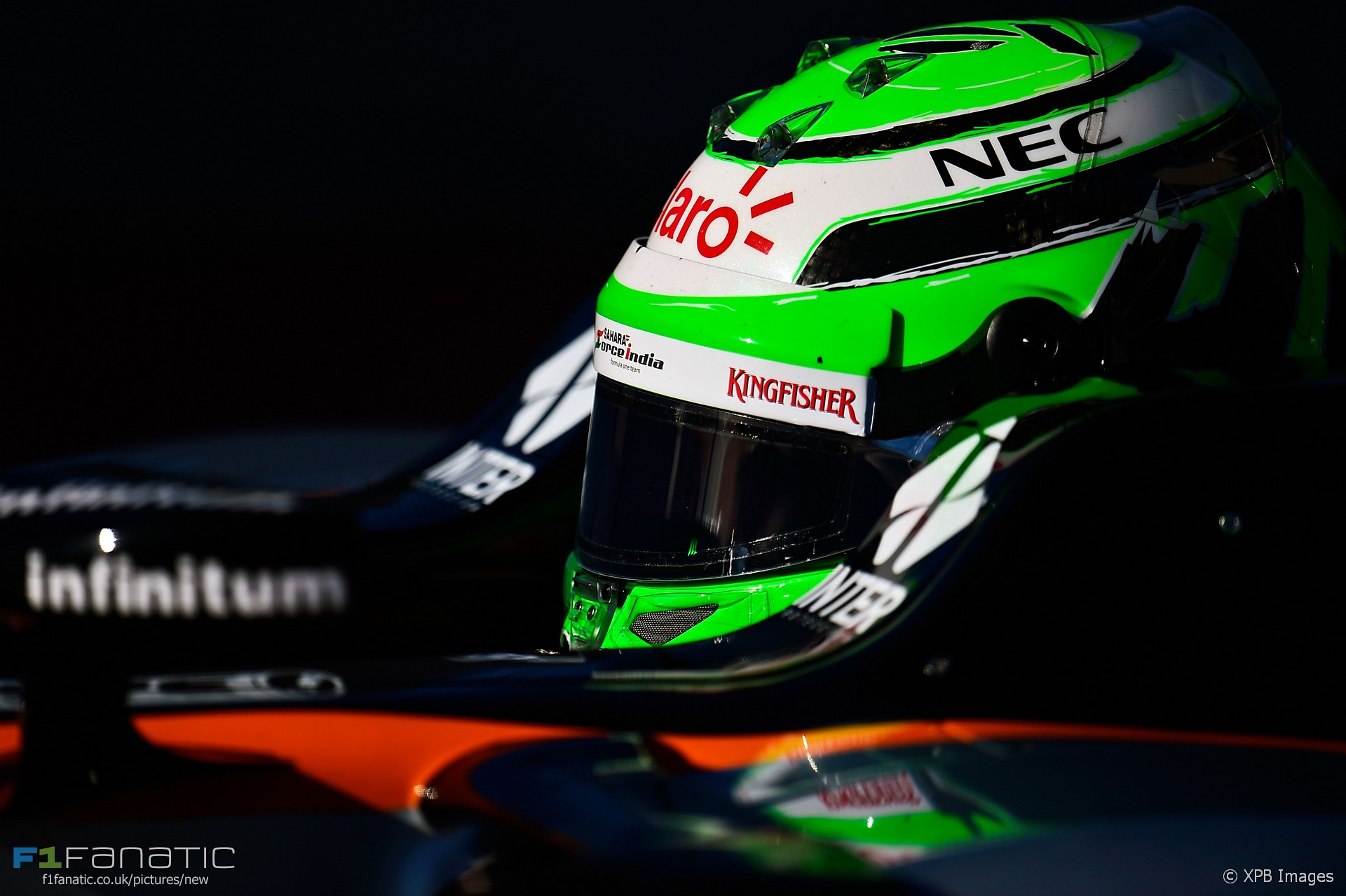 Before the 2016 season began it seemed incredible Nico Hulkenberg had never visited the podium. Following his near-misses this year it almost appears unjust.

Monaco was undoubtedly his best opportunity. He was running fourth and catching the slow Mercedes pair when Force India gambled on pitting him – and dropped him into the queue behind Felipe Massa.

Sergio Perez, who trailled his team mate until they pitted, caught the other side of this break and reached the rostrum. Nonetheless Hulkenberg netted sixth place with a surprise attack on Nico Rosberg on the final lap.

Another possible podium for Hulkenberg in Brazil was lost due to a puncture. Here too his team mate inherited third place, but lost it in the final laps to Max Verstappen.

Hulkenberg also got tired of heading home before the first lap was over. In Russia he was rammed by Esteban Gutierrez (who also hit the Force India driver again in Baku), he was dumped into the pit wall at Singapore and pinched between Sebastian Vettel and Valtteri Bottas in the USA.

Hulkenberg wasn’t solely a victim of misfortune, however. The podium beckoned again at Baku but a spin in Q2 allowed Perez to capitalise once more.

Qualifying was normally one of the strongest parts of Hulkenberg’s game. He usually started in front of Perez and impressed in Austria, where he claimed a front row start in damp conditions, and Mexico, where he beat both Ferraris.

Like Perez, Hulkenberg regularly came away with points. He took a superb fourth in Belgium despite his strategy being compromised by pitting before the red flag. Again he was running in a podium position until Lewis Hamilton blasted past with ease in a DRS zone.

But there was a discernible raising of Hulkenberg’s game after he put his name to a Renault contract at the end of the season. It showed just how good he can be, but it’s a level he needs to reach consistently if he’s going to start achieving the podiums he surely deserves.

Arguably a great season, solid drives, week in and week out. Had a few unlucky moments, like getting taken out at the start of Singapore, but had such solid drives each race weekend. But was beaten by Perez in the drivers’ championship.
@Dragoll

What’s your verdict on Nico Hulkenberg’s 2016 season? Which drivers do you feel he performed better or worse than? Have your say in the comments.

Australia – A fast start got him ahead of Perez and Ricciardo into eight, though he was soon passed again by the latter. He was the leading driver on the track to start on softs but didn’t stretch out the stint, preferring to pit for mediums on lap 16. This proved the right choice, but the timing of the stoppage meant he dropped behind Grosjean and he was unable to overtake the Haas driver.

Bahrain – Overnight tweaks ahead of qualifying paid off: “During qualifying the car just got better and better, and I think the track improvement came towards us as well,” he said. The reward was a place in Q3 – and its accompanying disadvantage of having to start the race on used tyres. He only made slight contact at turn one with his front wing but the team felt it necessary to pit him, ended his chance of points.

China – Was unable to participate in Q3 after a wheel fell off his car at the end of Q2, which also earned him a three-place grid penalty. He jumped up to fifth at the start but had to queue behind Perez in the pits and made the mistake of backing off on his way in, which earned him another penalty. “The rules say you shouldn’t slow down coming in,” he admitted, “but in the heat of racing it’s hard to gauge if that is giving you an advantage”. He finish a lowly 15th.

Russia – Missed first practice as Alfonso Celis drove his car, but still ended up the quicker of Force India’s drivers on the day. However he was missing some pace on Saturday, failing to accompany Perez into Q3. He was then rammed by Gutierrez at the start and retired.

Spain – Narrowly missed a place in Q3 as he wasn’t able to find a balance he was completely happy with in the upgraded VJM09. He lost three places at the start and was running outside the points when his car developed an oil leak.

Monaco – Qualified an excellent fifth, pipping Raikkonen by six-thousandths of a second and beating both Toro Rossos. But like Vettel he fell into the ‘Massa trap’ during the first stint and the time lost allowed Perez to get ahead. He showed tremendous opportunism on the final lap, however, demoting Rosberg for sixth place. Even so it’s hard to disagree with his assessment that the race was a “a huge missed opportunity” and the early pit stop “ruined my race”.

Canada – After a solid Friday he snatched a place in the top ten shoot-out. He dived past Rosberg on lap one but was unable to keep the Mercedes behind for the rest of the stint. However a trouble-free run in which tyre management was an ever-present preoccupation delivered points for eighth.

Europe – Blew his chance of starting at the front when he spun in Q2 and then had a mix-up with his race engineer on the radio which scuppered his attempt to do another lap. He picked up damage when he was hit by Gutierrez at the start but it was starting the race on the soft tyres which spoiled his day: he was struggling for grip on super-softs by the end and was demoted to ninth by the Red Bulls.

Austria – Committed early to slicks in Q3 and reaped the rewards, setting a time good enough for second with his third lap. He was cleared of going too quickly through yellow flags and kept the position. However his race was a disaster: the Force India chewed its tyres and Hulkenberg pitted three times. He was in trouble with brake wear as well, which eventually forced him out.

Britain – Beat his team mate into Q3 but was stripped of his best time after running wide. Much as was the case in Monaco Hulkenberg lost out strategically to his team mate. He showed immense car control not to hit Massa while trying to pass on the wet line at Woodcote, and after getting free of the Williams he recovered to finish on Perez’s tail.

Hungary – Beat Perez comfortably in qualifying but as the track dried in Q3 there was to be no repeat of his damp-track heroics from Austria. He lost a place at the start and two at his first pit stop, which doomed him to an afternoon in the slipstream of other cars. It got worse on his second visit to the pits when he let the clutch slip, delaying his tyre change and losing another place to Palmer. However he salvaged a point.

Germany – A grid drop – however small – seemed harsh for what amounted to an administrative error by his team which did not confer a performance advantage. He started eighth instead of seventh and held that position early on before using the undercut to get ahead of Bottas. While the Williams ran to the end Hulkenberg easily had the pace to make another pit stop and get ahead of him.

Belgium – A power unit problem in Q3 meant he was unable to improve on his Q2 time and so started behind his team mate. However he capitalised on the turn one melee to move into second. Unfortunately for Force India they chose to pit both drivers just before the red flag came out. Even without that Hulkenberg would have had a difficult time keeping Ricciardo and Hamilton behind, but fourth was the best available for him in any case.

Italy – Admitted he found it hard to nail a balance on his car, though sitting out first practice while Alfonso Celis drove his car won’t have helped. Even so he was only two-hundredths off Perez in qualifying. He lost ground at the start having to dodge around Verstappen, who then passed him for tenth on lap five. He was handed a place by Alonso’s slow pit stop and collected the final point.

Singapore – Came within a hundredth of a second of splitting the Toro Rosso drivers in qualifying. However this decent qualifying position came to naught when he was involved in a racing incident at the start which fired him into the pit wall.

Japan – Didn’t have the measure of his team mate in qualifying and though he gained places at the start Raikkonen and Hamilton took them back easily. There wasn’t much to choose between the Force India drivers on race pace. Hulkenberg’s pass on Bottas was one of the highlights of the race.

Malaysia – The Force Indias occupied row four but Hulkenberg was beaten by Perez. He was also delayed by the turn one collision, which dropped him behind Button. “I just couldn’t overtake him,” Hulkenberg admitted, and he spent two stints following the McLaren. He finished eighth.

United States – Looked on it throughout practice. He solidly out-qualified Perez and, importantly, both Williams drivers. But he was pinched between Vettel and Bottas at the start, ending his race on the first lap for the third time this year.

Mexico – Had good pace on the soft tyres on Friday and produced a gem of a Q3 lap to beat both Ferrari drivers to fifth. Though well aware that Force India’s fight was not with the Ferrari drivers he kept Raikkonen behind for several laps. He jeopardised his hard work with a spin when Raikkonen came through, but this was otherwise an excellent weekend’s work.

Brazil – Surprisingly neither of the Force India drivers beat Grosjean’s Haas in qualifying. But with Hulkenberg just six-hundredths ahead of Perez it seemed both were close to the car’s potential. Hulkenberg was running fourth at the time the race was stopped but fell to 15th when he was called in to replace his wet weather tyres under the Safety Car, the team blaming a puncture. Without that he’d have entered the final laps in third place with Verstappen bearing down on him. His pass on Magnussen, barely on the track with the pit wall coming up at him, was astoundingly brave.

Abu Dhabi – Alfonso Celis drove his car in first practice but Hulkenberg was on the pace by qualifying and narrowly beat his team mate to lead row four. He went around the outside of Verstappen at the start and survived the contact between the pair, then won a thrilling scrap with Perez to keep his place. Hamilton’s pace wasn’t slow enough for Force India to catch up, so seventh was the limit of what could be done.