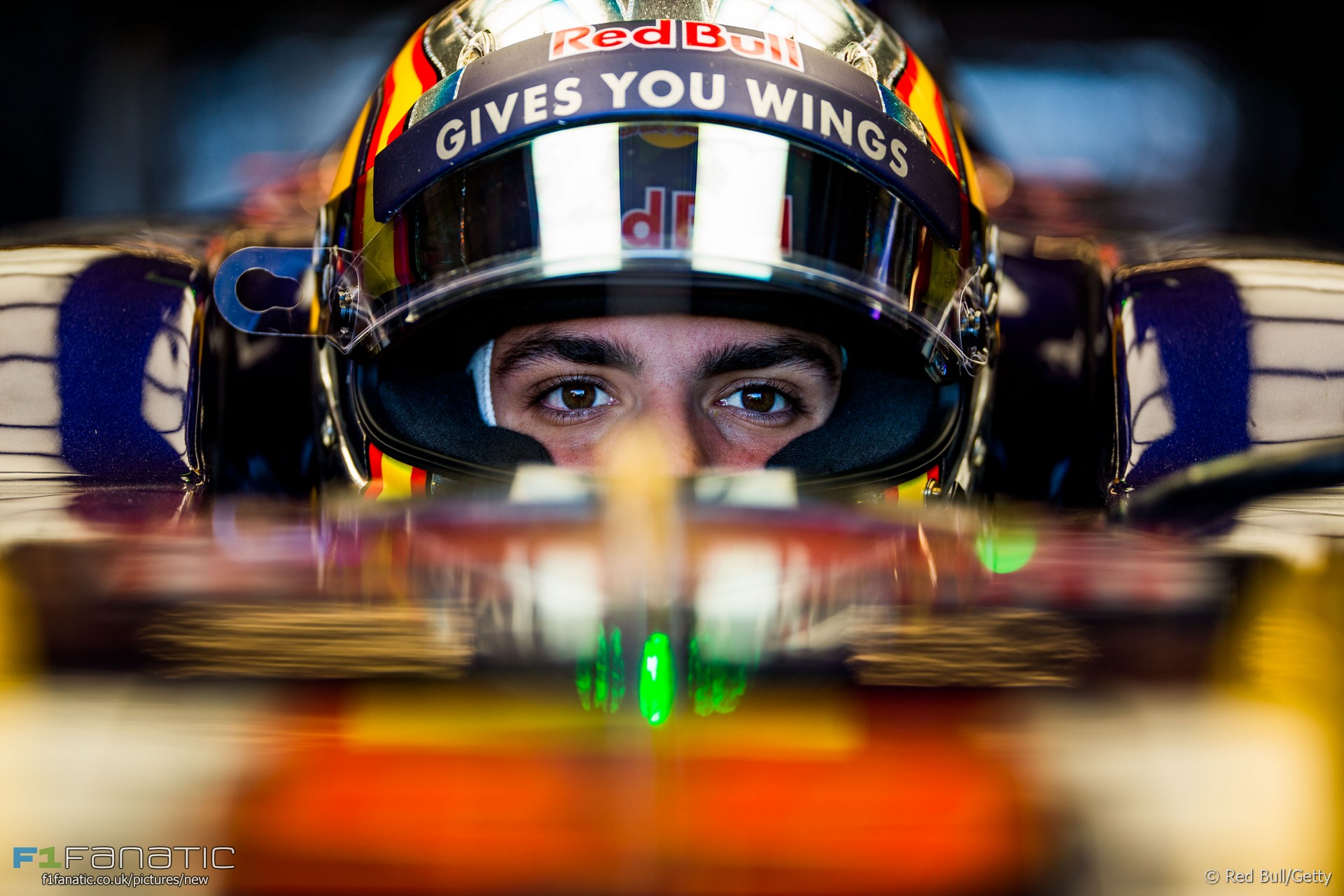 Carlos Sainz Jnr didn’t get the promotion to Red Bull his team mate enjoyed but was not demotivated in the least, producing a string of top-drawer drives.

Indeed while Max Verstappen took a shock victory first time out for Red Bull, his former team mate was also enjoying his best race to date. On home ground Sainz held third in the opening laps, fought the Ferraris and delivered an excellent sixth.

Sainz held his head up well against Verstappen during their brief spell as team mates at the start of the year. It didn’t help matters that in two of those four races he was hit by other drivers.

Once Kvyat arrived Sainz showed his new team mate no mercy, out-scoring him by 42 points to 4. And that crushing margin could easily have been greater.

In Monaco Sainz grabbed a spot on the third row but slow pit stops dropped him back to eighth at the flag. Despite a power unit failure in Austria he climbed eleven places to finish eighth at a track which was far from ideal for Toro Rosso. More car problems thwarted his efforts in Belgium (puncture) and Singapore (MGU-K), where he qualified a strong sixth.

By the latter stages of the season Toro Rosso had been out-developed by several of their rivals. Yet Sainz continued to drag the car into Q3 and pull off surprise results. Austin was arguably his best drive of the year, where he secured another sixth place.

Car problems were his only cause of retirements all year, though he did crash out of qualifying in Canada. This was the lowest point in what was otherwise a remarkable second year of F1 for Sainz.

Shown the way for Kvyat most of the season, had some great battles and impressive performance, not as good as Verstappen but still a fine wonder-kid.
@Deongunner

What’s your verdict on Carlos Sainz Jnr’s 2016 season? Which drivers do you feel he performed better or worse than? Have your say in the comments.

Australia – A tenth off Verstappen in Q3, Sainz held his position at the start but made a very early first pit stop, undercutting Massa to pass the Williams. He would have had a good chance of beating the Williams had the race run its course without the interruption, instead his late pit stop dropped him towards the lower reaches of the points. he passed Palmer to take ninth.

Bahrain – Sainz would have started ahead of Verstappen if he’d been able to replicate his Q1 lap time in Q2. Starting on the soft tyres meant he was immediately under attack at the start, and his race was ruined when he was hit by Perez.

China – Having out-qualified Verstappen, Sainz ended up on the medium tyres for longer than his team mate at the end of the race which explains how his team mate was able to get back ahead of him. Despite that he took Bottas for ninth on the final lap.

Russia – Had a straightforward day on Friday, missed the cut for Q3 by four-hundredths of a second on Saturday, but that gave him a free tyre choice for Sunday. He got off the line well but collected Kvyat’s front wing at turn two which forced him to pit early to have it removed. His tyres began to fade at the end of a long second stint, which allowed Button past, and a ten-second penalty for forcing Palmer wide left him 12th.

Spain – Was very pleased to take eighth on the grid in front of his home crowd. A rapid start and excellent pass on the outside of Vettel moved him up to third by the Safety Car. Despite firm defending with Raikkonen, the red cars inevitably passed Sainz with his year-old motor. His early pit stop dropped him behind Haryanto which meant Williams were easily able to get Bottas out ahead of him. It didn’t look like the car had more in it.

Monaco – Got his Toro Rosso onto the third row of the grid and brought it home eighth but said he was disappointed to have lost places at both his pit stops. Sainz was among the last to switch to intermediates and was back in for wets just ten laps later. Described racing around Monaco in the wet as “the most difficult thing I’ve done in my life” but copes with it better than most.

Canada – Of the two Toro Rosso drivers Sainz looked more likely to get into Q3 until he hit the wall. However from 20th on the grid he made up four places at the start and a well-timed first stop put him in contention for points. He built up enough of a gap before his final stop to make it without losing position, claiming a fine ninth.

Europe – Ran strongly on Friday but after changing his brakes on Saturday he wasn’t as confident in the car and failed to make it into Q3. He had just made his second pit stop and was looking to go on the attack when he also suffered a suspension failure.

Austria – Sixth in both sessions on Friday, he then had a luckless Saturday. An electrical problem in final practice forced a change of engines, and the replacement unit failed during Q2. He started strongly, climbing four places to tenth, but fell back to 17th when he pitted under the Safety Car. However he made it to the end from there, passing Alonso on his way to a decent eighth.

Britain – After a tough Friday Sainz was pleasantly surprised not only to gain a place in Q3, but start a strong seventh after penalties. Despite two mistakes in the race – including a dramatic slide at Stowe – he grabbed more points for eighth place.

Hungary – Took advantage of Raikkonen’s struggles in Q2 to qualify a superb sixth place – it’s doubtful the car was capable of more. Alonso jumped him at the start, however, and he was unable to re-pass the McLaren.

Germany – Another recipient of a tough qualifying penalty after holding Massa up briefly in Q2. He started well and got up to 12th but he too had slow service in the pits which ended his chance of beating the Haas pair.

Belgium – It was tough going for Toro Rosso at a track which punished their performance on the straights and he only managed 15th on the grid. He was unfortunate to collect a puncture on the second lap while running in the points, but carelessly blundered back onto the track and lost control of his car as the tyre disintegrated.

Italy – It was clear from practice the year-old Ferrari engine was hurting Toro Rosso at Monza. Sainz got into Q2 where he was slowest, but was promoted to 15th by Grosjean’s penalty. An attempt to do a one-stop race with a 29-lap stint on super-softs was extremely ambitious and predictably didn’t work.

Singapore – Delivered the maximum in qualifying on a track which suited the chassis but the race left him angry. A black-and-orange flag for damage repairs dropped him out of the battle for points, and an MGU-K problem consigned him to a frustrating evening.

Japan – Enjoyed a trouble-free Friday but the rest of his weekend was a frustration, particularly in the race. Toro Rosso’s lack of straight-line speed continues to dog them and Sainz was plainly over-driving the car at times in his battle with the Williams drivers. The result was an unhappy 17th place.

Malaysia – His race began with a drama when his engine cut out as he was doing his pre-start clutch preparation. He used the MGU-K to restart it just in time for the lights to go out, and did a “mega job” (his words) at the first corner to move up half-a-dozen places. The team used an alternative strategy to keep him in the hunt for points but it didn’t pay off – he finished a few seconds behind Palmer.

United States – Was justifiably proud of his qualifying effort, claiming a place inside the top ten despite his final practice being ruined by two punctures. He delivered a strong race too, avoiding the first-lap dramas and benefiting from the Safety Car to run fifth. It’s doubtful he could have found a way to keep Alonso behind, so sixth was a superb result.

Mexico – Made it into the top ten on Friday and – remarkably – did so again on Saturday, repeating his Q3 heroics from Austin. He was careless on lap one, forcing Alonso off and collecting a penalty, and also delayed by a gearbox problem. On top of that he lost a place to Button while getting out of Verstappen’s way, leaving him 16th.

Brazil – Found little improvement in Q2 and dropped out along with his team mate. However he was on great form in the race. Unlike Kvyat he didn’t pit for intermediates and this paid off handsomely: he was fourth with five laps to go. While Verstappen’s pass was probably inevitable he let Vettel go by rather too easily.

Abu Dhabi – Did little running in the more representative second practice session due to Kvyat’s punctures. Having started from the back row he got rid of his super-soft tyres early on and made some progress. An early second pit stop dropped him behind Palmer and shortly after passing the Renault he was rammed from behind, causing race-ending gearbox damage.