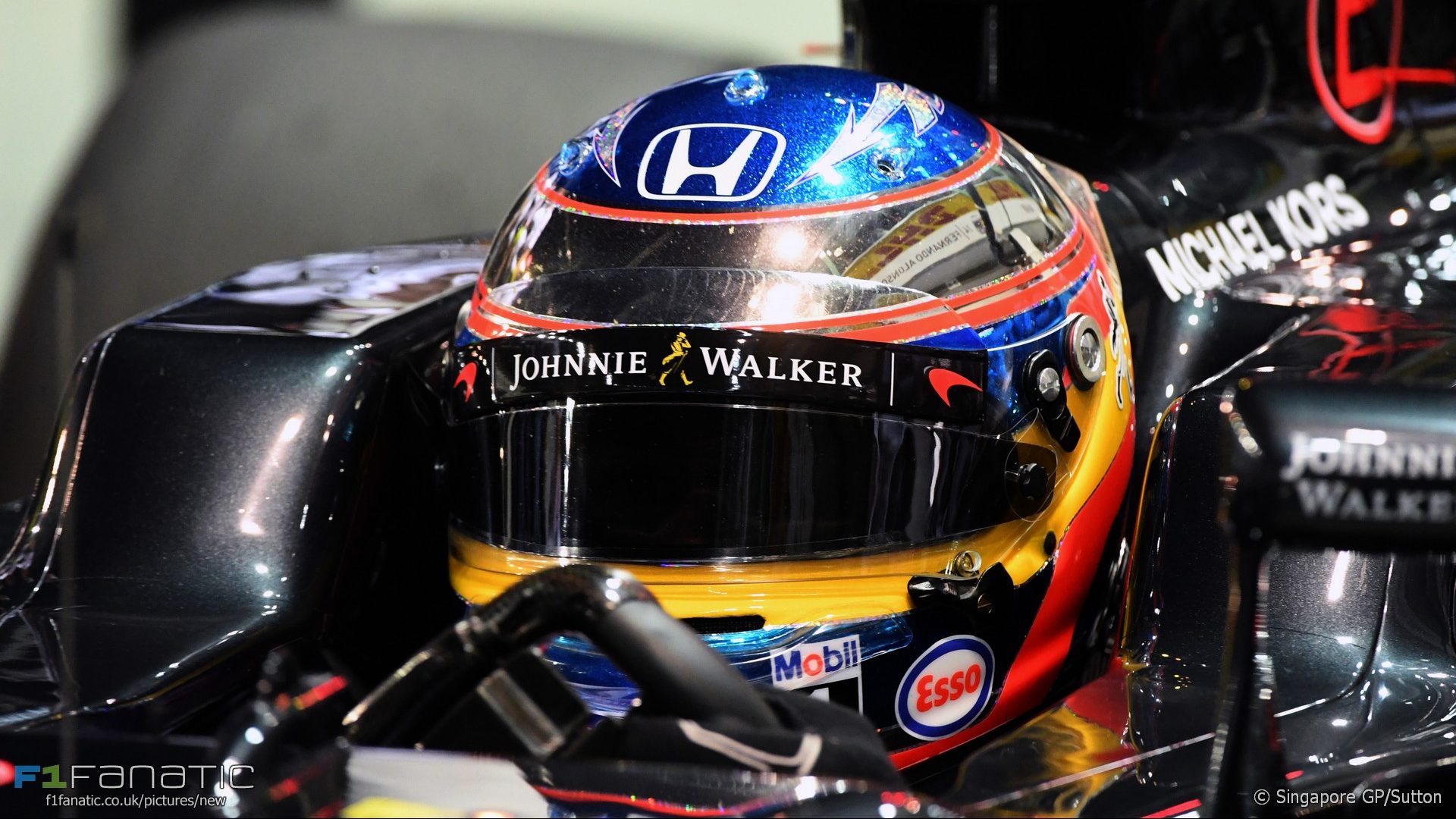 McLaren were typically the sixth or seventh-quickest team during 2016. So it speaks volumes of Fernando Alonso’s performance than he finished seventh or better on seven occasions while his team mate, a fellow world champion, did so only once.

When opportunities like these presented themselves Alonso could usually be relied upon to exploit them. He did so after the lap one mayhem in Russia and when the rain fell in Monaco. Incredibly, Nico Rosberg’s Mercedes was one of the cars following in Alonso’s wake at the principality.

The other two wet races were missed opportunities. He spun at Interlagos and Silverstone. He had been revelling in his car’s new floor during the latter but after badgering the team on the radio to find a strategic advantage which didn’t exist he went off at Abbey. This wasn’t typical: usually if Alonso’s race went awry it was because his car had let him down.

He took seventh in Hungary with only the Mercedes, Red Bulls and Ferraris ahead of him – cars that were vastly quicker than the MP4-31. He finished in the same position in Belgium despite starting from last place following a power unit change.

Singapore was an Alonso masterclass From ninth on the grid he drove a canny race, nursing his tyres early in the stints before unleashing his pace on demand to work his pit stops to perfection. Another seventh place.

Austin offered the chance for Alonso to get his elbows out and he did, barging Felipe Massa aside and taking Carlos Sainz Jnr for good measure on his way to another fifth place.

By the final race Alonso had amassed more than twice as many points as his team mate. A tremendous effort which didn’t get anything like the reward it deserved.

He has dragged that McLaren in places where it didn’t belong. He is always there in the top 10 when you least expect it. Massively outperformed Button in the second half of this season.
@Ultimateuzair

What’s your verdict on Fernando Alonso’s 2016 season? Which drivers do you feel he performed better or worse than? Have your say in the comments.

Australia – A race which ended with a spectacular crash had begun more promisingly: Alonso moved up to tenth at the start and was hunting for points. After pitting he was several seconds quicker than Gutierrez and it was that speed difference combined with a split-second misjudgement which launched his McLaren into the barriers. Fortunately he was unhurt.

China – Returned to action despite some rib pain but was disappointed by the red flags in Q2 which ruined his and Button’s hopes of making the final ten. Having stayed out of trouble at the start the Safety Car allowed him to run third, but his pace on two medium-tyre stints wasn’t quick enough to deliver his first points of the year.

Russia – Cautious about McLaren’s prospects after a solid Friday, Alonso wasn’t quite on Button’s pace in qualifying and lined up 14th. However he made great gains from the lap one confusion and emerged in seventh place. The car had the pace to stay there as well, and instead of being consumed by rivals on the straight Alonso finished a place higher up after Verstappen dropped out. He entertained himself with a few ‘push’ laps at the end, recording the fifth-quickest time.

Spain – Grabbing a place in Q3 represented progress, even if it meant he was the lowest driver on the grid who had to start on old tyres. He slipped behind Button at the start though and that confined him to his team mate’s pace until a power unit problem forced him out.

Monaco – Snuck his McLaren into Q3 but didn’t follow his team mate’s early switch to intermediate tyres in the race, the result being he maintained position through the first round of stops. The second pit stop played into his hands beautifully as it jumped him in front of Rosberg an Hulkenberg. He weather pressure from the Mercedes driver for the rest of the race and saw him off, holding on for an excellent fifth.

Canada – Said he might be better off if he missed a place in Q3 and started 11th with a free tyre choice. However thanks to a tow from his team mate he did get a place in the top ten. He couldn’t produce the same in the race, but after a radio request for a late pit “stop” he at least entertained himself by passing Kvyat.

Europe – Didn’t think a place in Q3 was possible but was disappointed to qualify as low as he did after a yellow flag meant he couldn’t use DRS on his last lap. Had it not been for his gearbox problem he would probably have taken 11th but the McLaren wasn’t quick enough for points on Sunday.

Austria – Not best pleased after Q2, when he did his initial run on a set of used tyres then on his new tyre run had to back off for a yellow flag. It had been caused by his team mate. His bad luck continued in the race, which was hampered from the early stages by a battery problem and eventually led him to retire.

Britain – Was the first to run McLaren’s new floor and looked committed from the word go, consistently taking the car into the top ten. He delivered on that potential in qualifying, but was bumped back a couple of places after losing his fastest lap due to exceeding track limits. He produced a brilliantly combative performance in the wet but wanted his team to take be more aggressive with the strategy. Given the lack of options available to them it’s doubtful that was a possibility, and Alonso’s costly spin at Abbey left him out of the points

Hungary – Was ‘Mr Seventh place’ at the Hungaroring and it’s unlikely the McLaren could realistically have finished higher. His slip-up in Q3 was the only blot on an otherwise very strong weekend.

Germany – Was held up by Vettel in qualifying but later admitted it hadn’t cost him a place in Q3 at a track where McLaren believed they should have been more competitive. However he moved up two places at the start and then overtook Massa’s hobbled Williams to run behind his team mate. There he remained until the final laps when, struggling with worn tyres and a shortage of fuel, he fell prey to Perez and Gutierrez and lost his grip on the top ten.

Belgium – Wasn’t able to run in qualifying after problems with Honda’s new power unit meant Alonso’s had to be replaced more than once. However having started last he was as feisty as ever at the start and took advantage of the chaos to move into the points by lap three. A free tyre change during the red flag period also aided his cause. Remarkably, he’d also got ahead of Hamilton in the opening laps but the Mercedes inevitably came past when the race resumed. He was powerless to resist Perez and Vettel too, but seventh was a huge reward.

Italy – A single run on new tyres in Q2 was not enough to gain a place in the top ten on this power track. A typically great start put him in the hunt for the points, but a hesitant getaway from his pit stop when the traffic lights failed to change crucially dropped him behind Hulkenberg. After that he took the curious decision to put on a fresh of soft tyres at the end of the race and set fastest lap.

Singapore – Consistently the quicker of the two McLarens, Alonso got his car into Q3 and qualified ninth. He made his usual combative start and was up to fifth early on, then managed his pace very carefully in order to be sure he could make a two-stop strategy work without giving away track position. That done, he brought the car home seventh having only lost places to two considerably quicker cars.

Japan – Spun off at Spoon on Friday doing some damage to the car. He was McLaren’s only representative in Q2 and found the race highly frustrating: early on he spent several laps edging closer to Massa in the hope of making a pass, only to be thwarted by yellow flags at the chicane. Two-stopping meant he spent more time in traffic and despite quick stops on both visits he finished one place lower than he had started.

Malaysia – Used Honda’s new power unit but 45 places of penalties meant it wasn’t worth doing a proper run in qualifying. The first corner kerfuffle was a gift which moved him into the hunt for points, and a decision to use an attacking strategy paid off when another Virtual Safety Car period handed him a free pit stop and allowed him to finish in front of Button.

United States – Said the car wasn’t quick enough to reach Q3 and took consolation from starting 12th on new tyres. However a good start – taking the outside line at turn one as usual – moved him up into the points positions. He spent the race in pursuit of Sainz until the VSC period put Massa between them. But Alonso first barged Massa aside with an uncompromising move, then took Sainz in a more straightforward fashion, and equalled McLaren’s best result of the season.

Mexico – Alonso’s run in second practice came to an early end due to a problem with his braking system. He took 11th on the grid but celebrated as if he’d taken pole having gained the highest new-tyre starting position. After his delay with Sainz a slow second pit stop wrecked his chance of points.

Brazil – Bounced back from a technical fault in second practice with a fine performance in qualifying. He beat Button by half a second in Q1 and went on to reach the top ten. He pounced on Perez superbly at the start and beat the Force India to the line. However his switch to intermediates a few laps later dropped him back into the pack. By the final restart he was back up to eighth, but he blew his chances of a better points finish with a spin. He salvaged the final point by taking Button, Magnussen, Wehrlein, Bottas, Kvyat and Ocon in the sprint to the flag.

Abu Dhabi – After spending first practice working on McLaren’s 2017 developments Alonso put his car 11th-quickest in the second session. He went two better on Saturday, crediting the improvement to some bold set-up calls. With no cars retiring in front of him, and Massa’s Williams much quicker in a straight line, tenth was probably the best he could do. But a Vettel-esque final stint on super-softs meant he was pressuring Perez and Massa as the race ended.