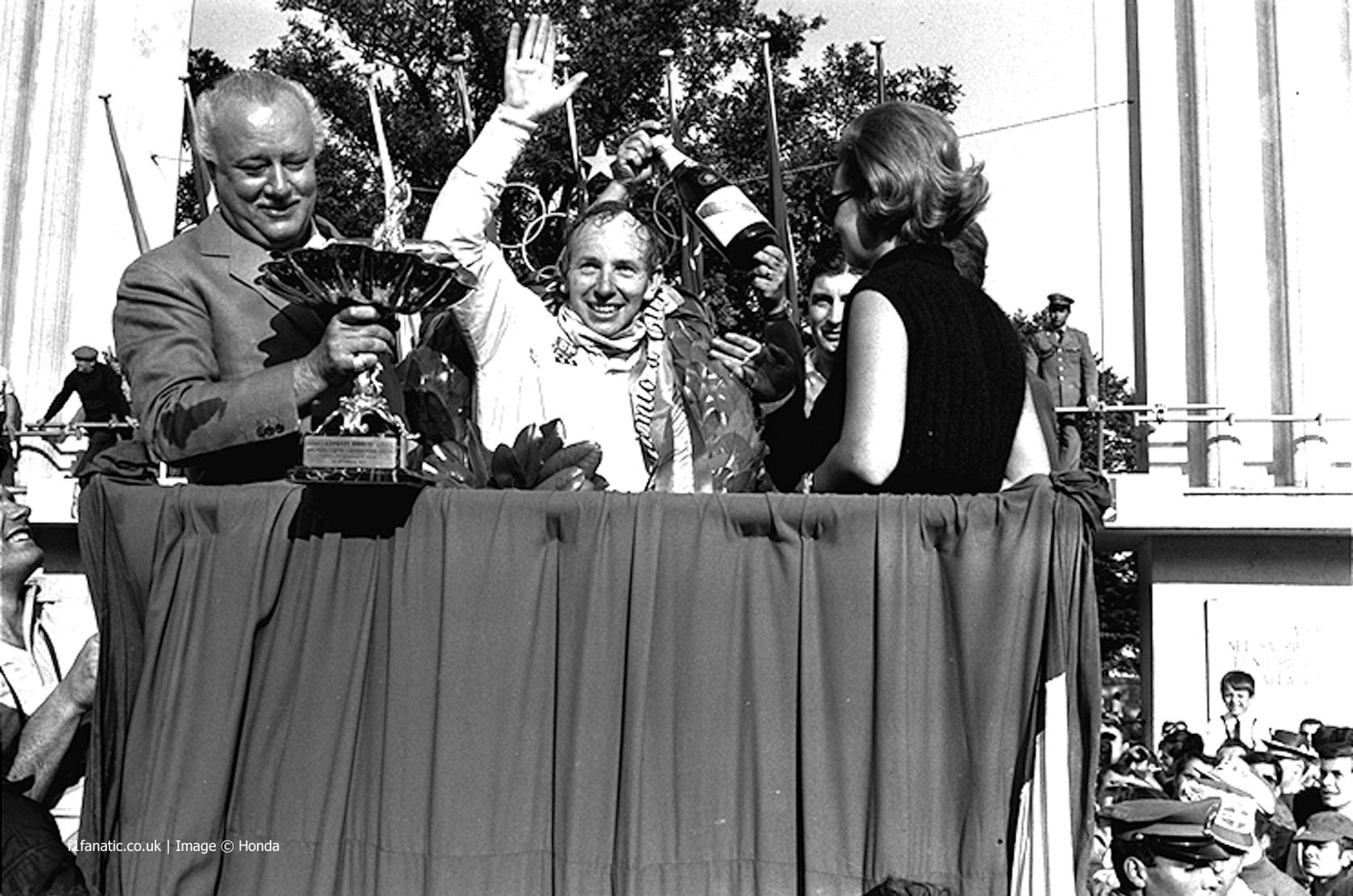 Having conquered the world of motorbike racing, John Surtees embarked on a four-wheeled career which culminated in the unique achievement of becoming champion on two wheels and four.

The British racing hero’s greatest achievements came at the wheels – and handlebars – of Italian machinery, earning him the affectionate nickname ‘Il Grande John’.

By the age of 26 Surtees was already a multiple champion in the 350cc and 500cc motorbike world championship classes riding for MV Augusta. And he had already begun to sample four-wheeled machinery, setting him on a path to Ferrari and world championship success.

Having made his debut driving for Ken Tyrrell, Surtees was picked up by Lotus who gave him a handful of grand prix starts in 1960. Second place second time out at home at Silverstone confirmed the depth of this versatile talent.

But Surtees was wary of committing to Lotus, where Innes Ireland had been unceremoniously turfed out despite scoring a breakthrough victory. In the short term this kept him out of their competitive machinery, though given the failures they were prone to it might also have considerably increased his life expectancy.

Instead he piloted a Yeoman Credit-run Cooper in 1961, managing a pair of fifth place finishes. Matters improved the following year when he began a relationship with Lola. He started the season-opener from pole position and went on to claim a pair of second places, including one at the daunting Nurburgring Nordschleife.

Ferrari had endured a disastrous 1962 season but Surtees put his faith in them for 1963 and was soon rewarded. He proved his mastery of the Norschleife where he took his first world championship race victory on his way to fourth in the world championship.

For 1964 the team had a much-improved V8 engine which Surtees used from the start of the year. Reliability niggles meant that after four races he had just a single second place to his name. When he joined Jim Clark and Graham Hill on the podium after taking third at Silverstone it seemed unlikely he would emerge as a championship rival.

But at the Nurburgring he barged past Clark on lap two and went on to win, then added a second on home ground for Ferrari a month later. Suddenly he was in the championship reckoning, and though he finished second to Hill at Watkins Glen, Surtees went to the final round still in contention.

The finale was pure drama. Hill was on course for the title when Surtees’ team mate Lorenzo Bandini knocked him off. This put Clark in position to scoop the crown but an oil line broke on the final lap. Now the title was going to Hill again, but Bandini was on top of the situation and by waving his team mate through into second secured the title for Surtees.

Team politics at Ferrari forced the new world champion out less than two years later. But a more serious setback struck before then: Surtees was badly hurt in a Can-Am crash at Mosport in 1965 and continued to suffer the after-effects for years.

Surtees won on his final appearance for Ferrari, comprehensively seeing off the opposition at another of the old monster tracks, the 14-kilometre Spa-Francorchamps. After being forced out by team manager Eugenio Dragoni, Surtees joined Cooper and won for them before the year was out.

For 1967 he was approached by Honda’s works team to pilot their Lola-fettled chassis. The RA300 was overweight but Surtees claimed a superbly-judged win at Monza, beating Jack Brabham in a sprint to the line. The project ended the following year after Surtees’ team mate Jo Schlesser was killed driving the team’s radical new car about which Surtees expressed deep reservations.

Following a season with BRM, Surtees set up his own team for 1970 and introduced his own chassis at round five, held at his local circuit Brands Hatch. He took points finishes in his TS7 and TS9 over the next two seasons before stepping back to administer the team.

Following his retirement from motor racing Surtees continued to appear at historic events, piloting his former cars and bikes well into old age. He also took up the cause of young British talent through the Racing Steps Foundation.

Naturally he took a special interest in championing the efforts of his son Henry, who moved up through the British motor sport echelons until he reached Formula Two in 2009. But during a race at Brands Hatch the 18-year-old was struck on the helmet by a loose wheel and was killed.

Following the tragedy Surtees set up the Henry Surtees Foundation to help young people who had suffered accident injuries.

Surtees passed away on March 10th, 2017 following a short illness. He is survived by his wife Jane and daughters Leonora and Edwina.