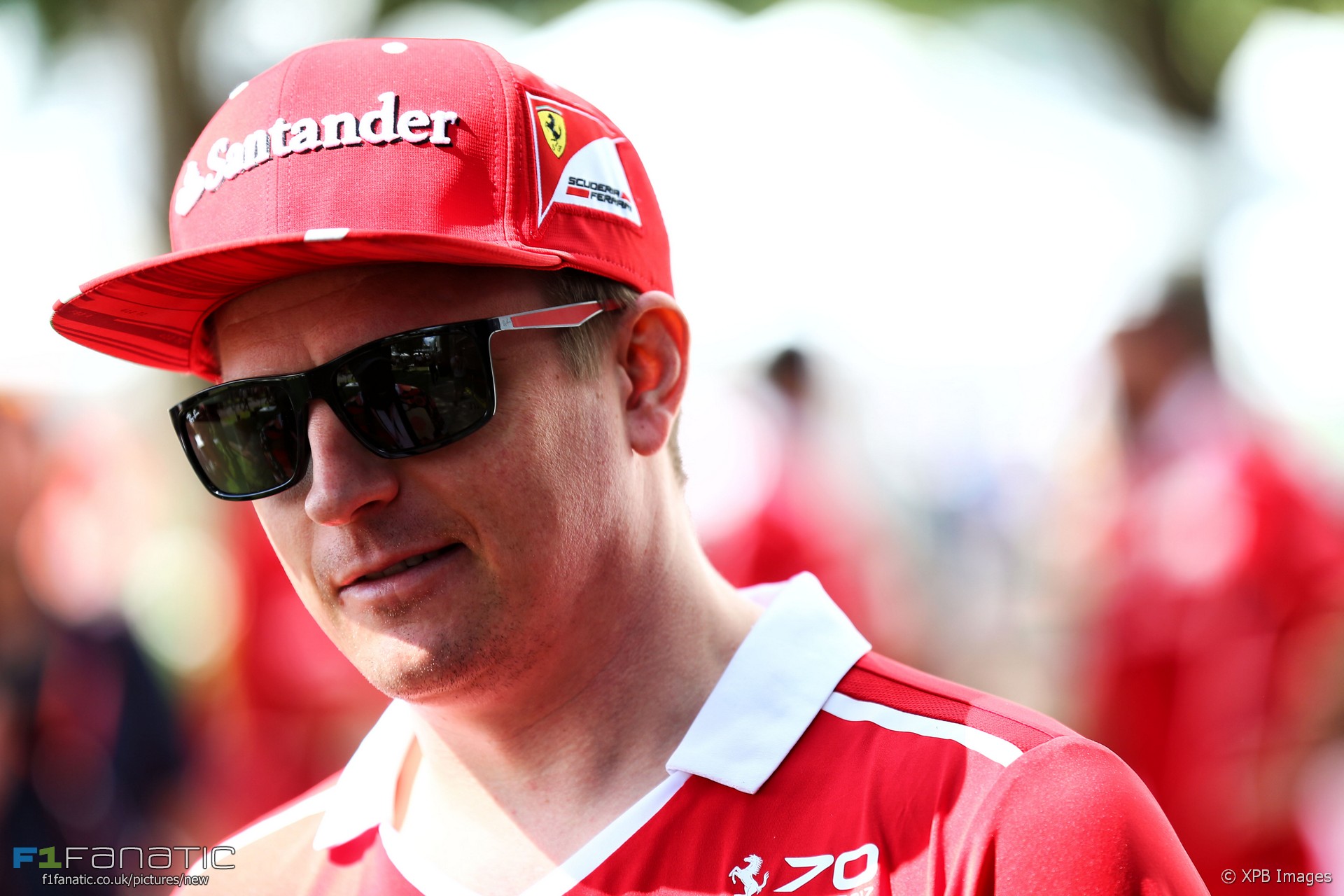 Notable radio messages from final practice and qualifying for the 2017 Australian Grand Prix.

Kimi Raikkonen went down an escape road early on.

“Puncture, rear-left Kimi.”
Raikkonen: “Why did my car stop when I tried to slow down? I felt it, the puncture. It’s just stopped.”
“I don’t know why. No idea.”
Raikkonen: “Can I try to restart it?”
“I think we should go for it, Kimi, just stay there for now, let me tell you what to do”

Some drivers were unhappy with their overnight changes.

Palmer: “I feel much less happy with the stability in the rear.”
“Everything looks OK from our side at the moment.”

Sainz: “It’s a bit different to yesterday. A bit more understeer. Makes sense to try something.”

Kvyat: “I have some liquid in side my seat. It’s cold so it isn’t too bad.”

Grosjean: “OK guys I am really struggling with the front-left into nine and 15. Front locking.”

It was a difficult session for Williams as Lance Stroll crashed and Felipe Massa encountered other problems.

Red Bull continued to struggle to get near the pace of the top two teams.

“Verstappen: “What do you want me to do?”
“OK let’s box now.”
“Car has a lot of understeer mid-corner now so completely different again.”

Despite there being two fewer cars this year the usual problems with traffic occured in the first part of qualifying.

Ericsson: “Need to look at Stroll, he blocked me, I lost the downforce.”
“Stroll blocked you, 11.”

Having been forced to pit earlier because of a fuel flow problem, Vandoorne made it back out for one flying lap. But that was compromised too.

“OK Stoffel we think we still have the issue. We will still try to set a lap. You need to let Fernando through, he’s the car behind. use the space behind Fernando. The car looks OK, Stoffel. One timed lap. Yellow G1.”

“OK Fernando we are safely through to Q2.”
Alonso: “And now we just need some rain.”

Vandoorne: “It’s very difficult to do a warm-up lap and let Fernando through as well, just disturbs the tyre warm-up. Just need to make sure we don’t have these issues any more.”

Stroll was able to take part in qualifying after his crash in final practice but he couldn’t progress beyond Q1.

Stroll: “Completely lost rear grip, after the first lap I was getting back into it.”

Raikkonen: “The rear is still quite bad.”

McLaren were under the impression Hamilton had begun Q2 on used tyres but according to Mercedes he was on a new set.

Alonso: “Anyone with used tyres?”
“Hamilton was on used and he was quick on it. So it looks like it’s a decent tyre for the first run.”

More frustrated drivers, but of these only Alonso failed to reach Q3.

Verstappen: “Mate, never send me out again after Daniel, it’s too slow.”

Verstappen: “I had a lot of pulling on the brakes, turn one. I don’t know what happened there.”
“Understood.”

Grosjean: “I got massively blocked by the Sauber and the Red Bull at the end of that lap. The guy wouldn’t let me by. I lost so much.”
“Understood, we’ve reported it.”

Alonso: “Yeah same thing with the exit. Back off in the exit of last corner, off the kerb, when I went back on the throttle, no power.”

Alonso: “Lap was really good. Cannot do more than this.”
“It looked good from here, nice work.”

The threat of rain didn’t materialise in a significant way.

Raikkonen: “There is some rain.”
“Understood Kimi. The shower is on the other side of the city, think we’re just getting a few drops.”

It was a disappointing session for Ricciardo, who hit the wall. His demise handed Grosjean a shot at a third row start.

There was little to choose between the Toro Rossos but the two Finnish drivers weren’t entirely satisfied with their laps.

“We are P9, Danny. It’s less than half a tenth.”
“Agh. It was probably, yeah, almost everything. Except of understeer again in turn 11.”

“OK so that’s P3. Vettel just pipped you in that last sector by three-hundredths.”
Bottas: “Well thanks anyway, guys, we’ll get him tomorrow.”
“Copy that.”