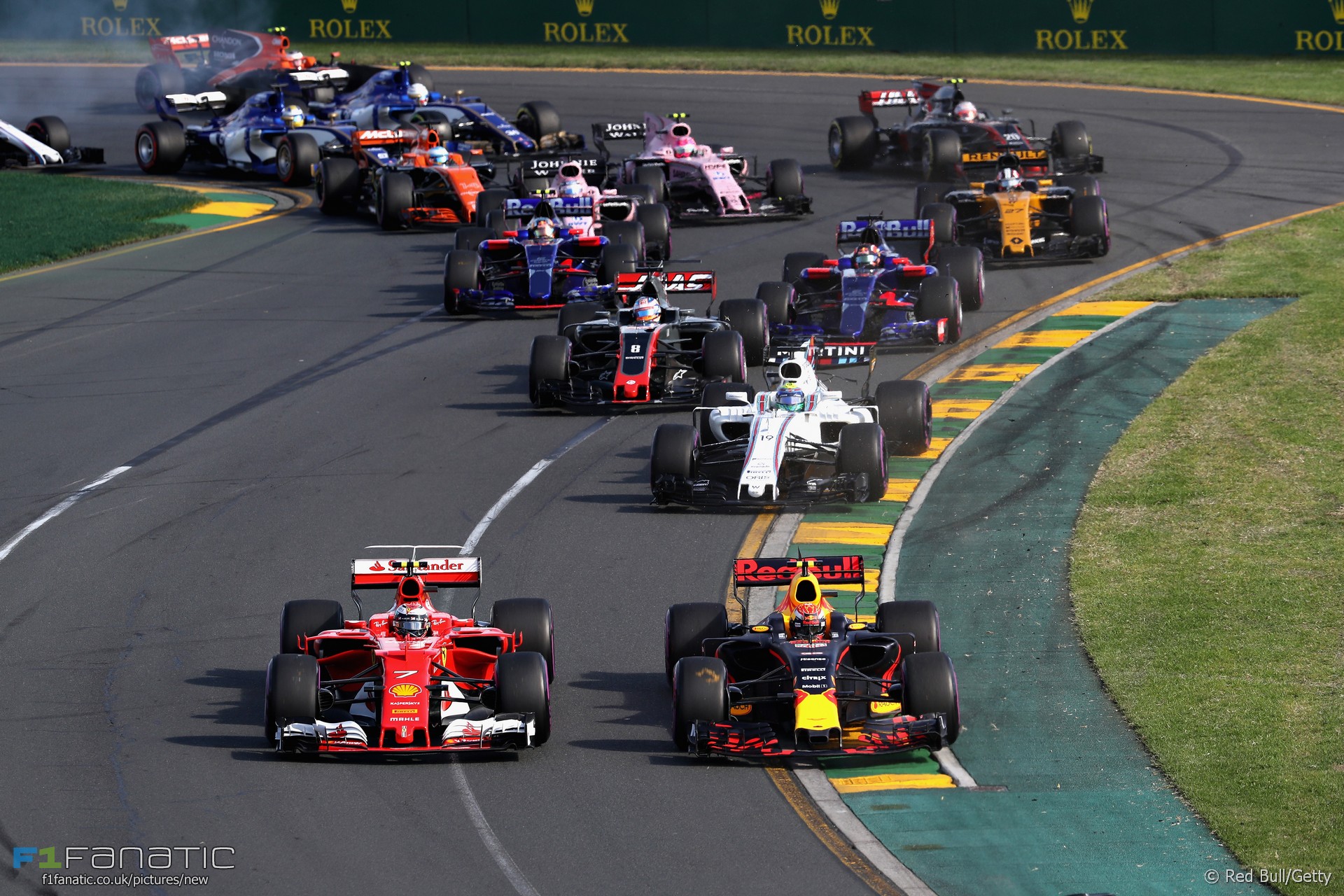 Predictions that the leader into turn one would win the Australian Grand Prix turned out not to be true. And the first race of 2017 also indicated Mercedes and Lewis Hamilton may have a fight on their hands this year.

But there’s no denying the Melbourne curtain-raiser was short of action. It received the second-lowest rating F1 Fanatic readers have given a race over the last ten years, averaging 6.4 out of ten, better only than the 2015 race.

Are spectacular cars which drivers can race flat-out a worthwhile trade-off for fewer overtaking moves? Here’s what you made of the first round of 2017:

I thought it was a good race. Nothing special. Quite typical for a dry race at Melbourne with no Safety Car.

Glad to see that Mercedes didn’t win, and Ferrari won on genuine pace.

Good to see that the drivers can push hard too.
@Jaymenon10

This is Ecclestone’s final laugh. Cars that can’t overtake. This isn’t racing. The result was decided on one pit stop. Ecclestone must be laughing his head off as he sells a destroyed series.

If the rest of 2017 is like this race then it really will be a disaster for Liberty.
Bill

If you subtract the excitement of the season being under way and judge the race as objectively as possible, there was very little actual passing or direct competition for positions. Relatively processional. It could be that Albert Park is not conducive to passing with the new car design, that the new aero wake makes following closely through corners harder than last year or a bit of both. This may be less of an issue at other circuits but time will tell.

For the season ahead, it is great to see two teams with such a small performance gap at the front of the field. Hopefully Red Bull and others can overcome the gap to the leaders sooner rather than later.
Hillstc86

Several of you expressed the hopeful view that the racing might improve once F1 goes to more ‘normal’ tracks:

Sadly that was a very dull race that was only partially redeemed by seeing genuine competition at the front. I couldn’t watch the race live and half way through watching the re-run I had actually forgotten I was watching the ‘highlights’ package because there was so little action taking place.

Still, Melbourne is not known for great racing so I’m hopeful that most races will be a bit more exciting. And if we’re really lucky we’ll get a 2010 style season where although most of the racing was mediocre (in my opinion) there was an exciting championship battle to keep us interested.
Keith Campbell (@Keithedin)

One race is not enough to judge how the new regulations have affected the racing but the signs aren’t good so far. There were hardly any on track overtakes with the most significant change in position coming through strategy and timing of the pit stops.

From the start of the race it seemed that Vettel was the quickest and if he managed to get ahead of Hamilton then he could pull a gap and he wouldn’t be troubled, when Hamilton lost track position after his pit stop that is what happened.

From the post-race comments it seemed that it wasn’t a strategy error from Mercedes as Hamilton had to stop then and that they just didn’t have the overall pace to match Vettel on the day.

Again after only the first race weekend we do not have an accurate picture of how competitive each team is, the relative pace of all the cars this weekend may be a one off, and when the teams and drivers get to understand the new rules and cars we may see one team has a clear performance advantage on the others, so I am not getting my hopes up yet that we will have a close championship battle this season.
@Pja

Hope on the ‘proper’ race tracks that ‘proper’ battles can occur. However, so much aero combined with one-stop strategies isn’t a recipe for engaging racing. Oz is usually boring, but without a safety car and all the mind numbing aero, it was dull to watch. Once Vettel made the pass in the pits, race was over.

According to timing screens the cars are faster, but as usual FOM production methods managed to make them look slow as ever. Would it kill them to kill the helicopter shots?
@Jimmi-cynic

It wasn’t just the lack of overtaking which was a cause for concern:

Something is fundamentally wrong with F1 and it needs to change soon.

We can’t have a competition where 70% of the entries are there just for colour or noise. And it’s not like this is a knockout event where there’s a final race where only a small percentage of the participants have a shot at winning the event.

The rules must ensure that more than half of the field should finish in the same lap as the leader. It’s a de facto two-tier championship and that is not attractive to viewers or sponsor, it thus renders the competition unsustainable, commercially.
@Faulty

The usual bottom banner displaying times and positions was not there. As a result the race was far less understandable I hope it will be back for the next race. I usually watch it live so got the F1 timing screen on a tablet but not today and I couldn’t have this information. This was quite frustrating.
@Spoutnik

It wasn’t a great race but it was made even worse by the poor feed quality. There was never any live timing so we couldn’t see what the midfield was doing, they barely showed any replays and strangely even on board cameras seemed non-existent. I hope it was just tech errors, rather than a sign of future, where they expect you to use an app to get all the detail.
Simon (@Weeniebeenie)

But those who experienced the new-look F1 in person weren’t disappointed:

My first race event since I went to Albert Park in 2011. Being as passionate as I am it felt like a dream come true after I got tickets for my birthday earlier this year.

I felt going in that regardless of what happened it would be an amazing experience on Sunday. Watching Ricciardo ground to a halt on the big screen twice didn’t help the cause, but seeing Ferrari back on top of the podium certainly made up for that.

By far the best part of the weekend for me though was getting the opportunity to have a little wander around with none other than Martin Brundle after qualifying.
Little_M_Lo (@Pezlo2013)