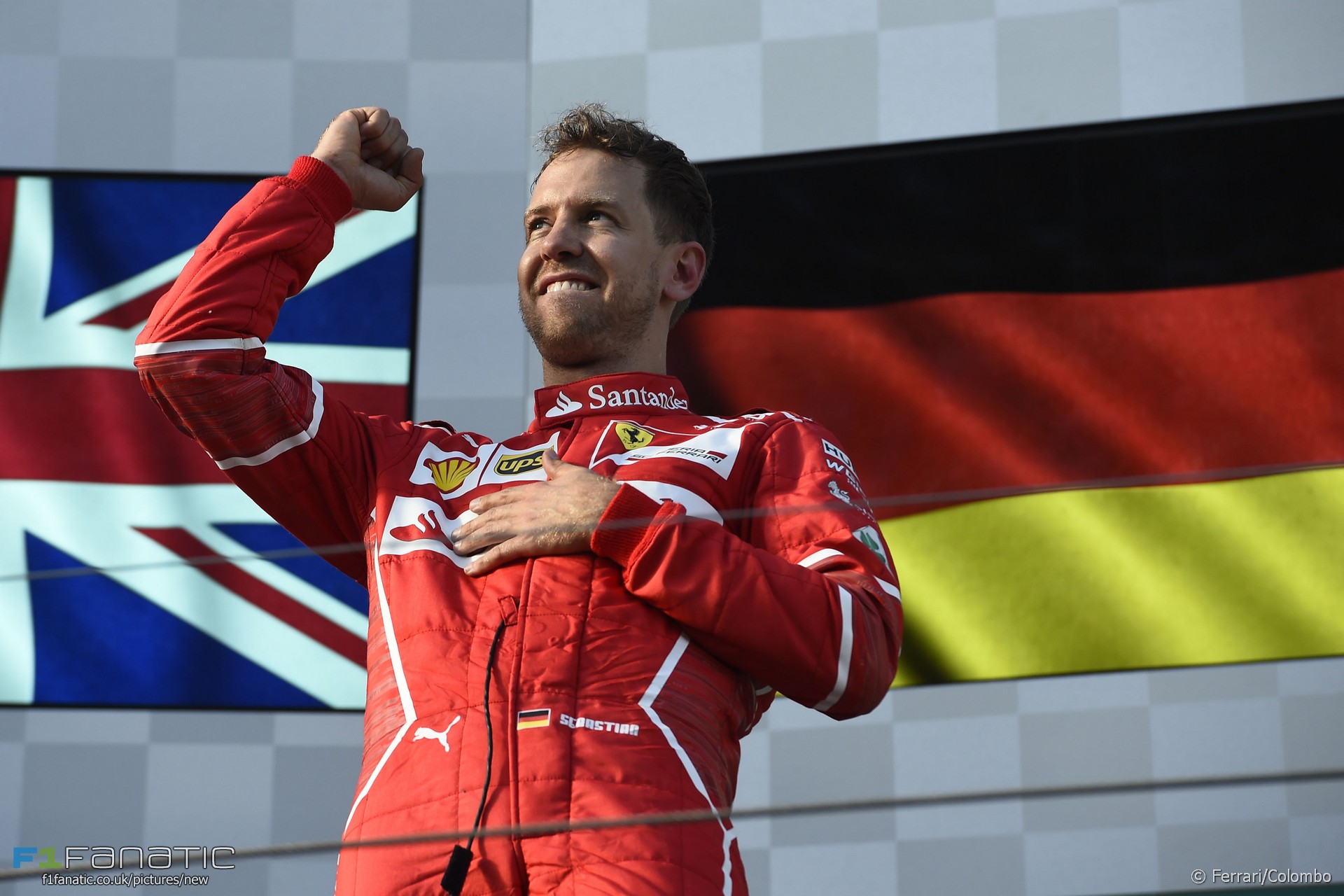 Sebastian Vettel was voted Driver of the Weekend for the second race in a row after his victory in the Australian Grand Prix.

The Ferrari driver topped the poll of F1 Fanatic readers for the third time in the last four races. Here’s why.

After a low-key Friday Vettel topped the final practice times and split the Mercedes drivers in qualifying. That proved crucial, as it put him in position to apply pressure to Lewis Hamilton.

Unable to shake Vettel, Hamilton made an early pit stop which dropped him behind Max Verstappen. A few quick laps allowed Vettel to seize his opportunity to come out ahead of the Mercedes driver and start his season with a win.

As Hamilton said, Vettel ‘kept a lid on it’ initially (which seemed to extend a bit to FP1 in terms of performance), but came alive FP2 onwards and showed what the car was capable of by out-qualifying Bottas.

He also showed the gulf in performance between himself and Raikkonen without there being any obvious explanation otherwise. Many times people wonder if drivers do really make the difference in F1. Here is some food for thought: imagine two Raikkonens in the two Ferraris. Ferrari would have finished a distant three-four or even three-five and instead of all of us talking about how amazing this season is shaping up to be and how ‘F1 is back’, we would all be talking about another dull drab season where Mercedes would take away all the spoils.
Urvaksh (@Thedoctor03)

I voted Vettel not just because he won but the way he handled the car through the street circuit. It seemed so well balanced, even when he was in Hamilton’s Merc’s dirty air earlier on. He seemed so much faster and more at home than his team mate.
@Loup-garou

His first-stint was masterful, and he kept Verstappen behind him when it mattered in the first three corners of second stint.
Gary

While Vettel took more than half of your votes, many offered praise for Sauber’s short-notice substitute Antonio Giovinazzi. Having missed Friday practice entirely, Giovinazzi brought his car home in the race.

The incredible performance of Giovinazzi only coming in on Saturday morning, on a track he doesn’t know, and looking like a seasoned veteran throughout is the standout performance. Giovinazzi proved beyond doubt that he belongs on the grid
@Montreal95

He was just one tenth slower that ‘experienced’ teammate Marcus Ericsson in qualifying, then finished the race just two places from a point-scoring position at the wheel of a year-old-engine Sauber car. Hats off!
Jayfreese Knight (@Jeff1s)

Also among those singled out for praise were Daniil Kvyat, Sergio Perez and Nico Hulkenberg.

Coming back from such a horrible year, he managed to make his tyres last without losing any pace compared to his teammate and would’ve finished way ahead of Sainz and maybe catch up to Perez if it wasn’t for his late pit stop.

I’m unashamedly a fan of him since his rookie year and I would love to see him and Sainz (also a personal favourite of mine) prop Toro Rosso up to great heights this year.
Fikri Harish (@Fihar)

Perez was half a second faster than Ocon in qualifying and was the one driver who actually overtook people getting the Toro Rosso’s on track and a maximising P7.
Kavin Kannan (@Lolzerbob)

Hulkenberg for me, utterly destroyed his team mate (who spent the whole weekend complaining about the car) while finishing the race just outside the points, and being part of the most exciting racing move throughout the grand prix (the three-abreast pass on Alonso by him and Perez).
Pdaavv (@Miuzi05)

But how good was Felipe Massa’s race? His new team mate’s troubled start made it difficult to judge.

Strange that Massa suddenly extracts the most the Williams is capable of when he failed to do so the past seasons. Stroll will make Massa look mega this season.
Gabriel (@Rethla)

Who F1 Fanatic readers are supporting in 2017

Which drivers are you rooting for? Here’s how you can show your support for them and all the other drivers on the grid on F1 Fanatic: