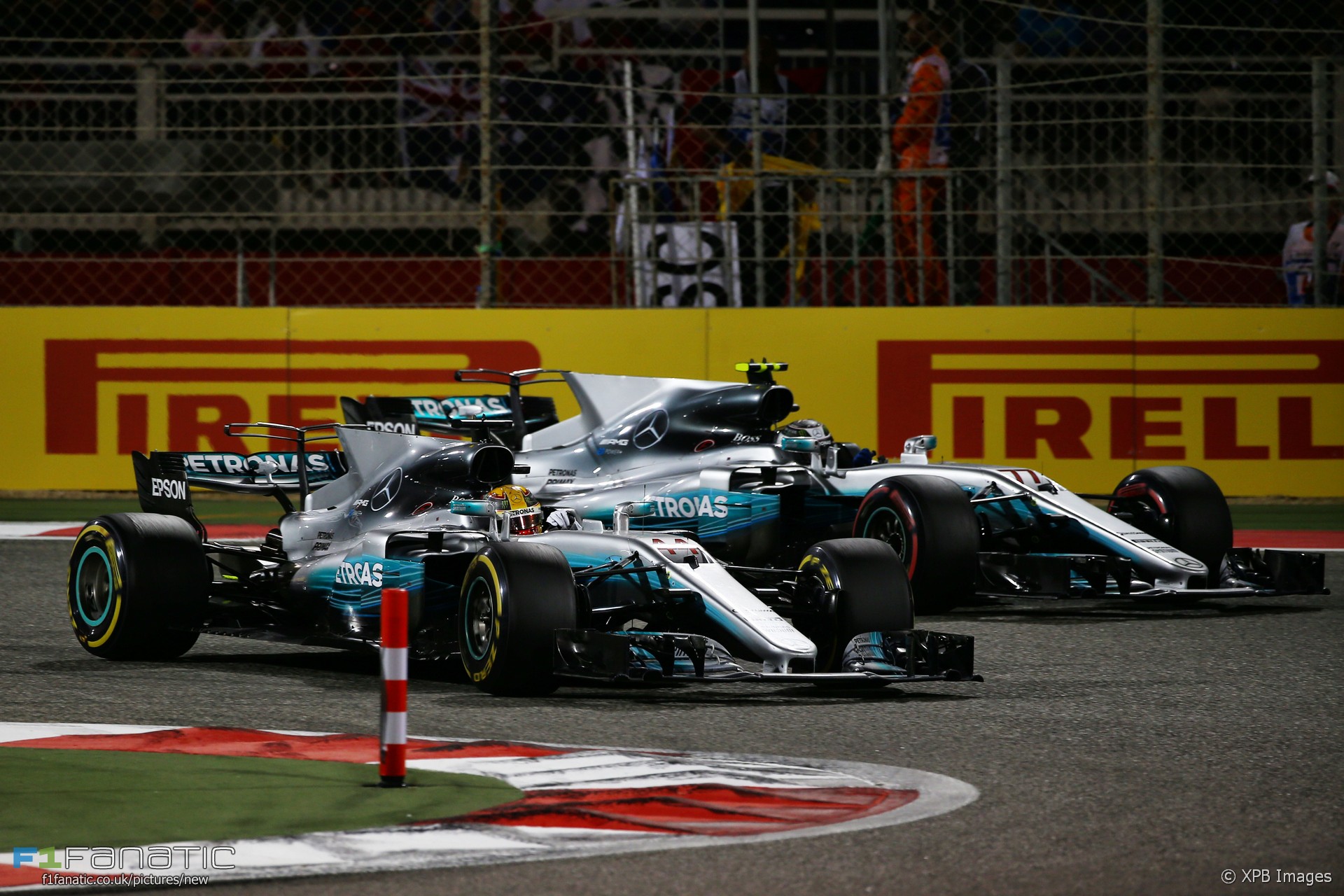 Mercedes issued team orders at least three times during the Bahrain Grand Prix. However they cancelled their first instruction for Valtteri Bottas to let Lewis Hamilton by.

However they swapped the running order of their drivers twice more as they tried to use Hamilton’s quicker pace to attack race leader Sebastian Vettel, despite Hamilton picked up a five-second penalty for a pit lane transgression.

Here are the team radio highlights from yesterday’s race.

Kevin Magnussen encountered a problem on his Haas before the race even started.

To Stroll: “After turn 13 we’re lift-and-coast, straight to grid, check your drinks.”
“Drinks are working.”

“Radio check from the garage.”
Hamilton: “OK.”
“Still headwind into one changing between 10 and 20kph.”

Kimi Raikkonen’s mechanics attended to a minor problem on the grid.

Raikkonen: “What’s the issue?”
“Just a little bit of damage on the turning vane so we’re adding some tape to cover it up.”

As the race started Valtteri Bottas kept his lead from pole position but ran a slow pace due to high tyre pressures.

To Verstappen: “OK Max display eight when you can.”

To Verstappen: “Alright Max maybe some tyre management going on ahead. Keep a decent gap.”
L3 To Hamilton: “Try to improve lift-and-coast efficiency. Verstappen 0.5 behind.”

L4 To Bottas: “Vettel now has DRS, use overtake.”
L6 To Ricciardo: “Pace at the front stable. People doing 36.5s. Not opening up much. Pulling away from Massa, he’s holding up Raikkonen.”

L13 To Raikkonen: “Do the opposite to Ricciardo. Concentrate on position. Alonso, Palmer on track. And engine one, Kimi.”

A collision between Lance Stroll and Carlos Sainz Jnr brought out the Safety Car. Mercedes reacted by pitting both their drivers. Sebastian Vettel had already made his pit stop, and took the lead.

To Bottas: “Only just positive, it’s going to be tight with Vettel.”

Nothing was heard on the radio in response to this question. Red Bull may be using a dial setting on their steering wheel for their drivers to give yes/no responses without them being broadcast.

To Ricciardo: “Looked like Hamilton slowed down in the pit lane in front of you, can you confirm that?”
“OK, understood.”

After the restart Bottas was initially told to let Hamilton through but he closed the gap to Vettel and Mercedes told him to maintain position. Note that the lap numbers refer to the lap on which the message was heard in the broadcast.

L20 To Hulkenberg: “Really need to start looking after the rears now.”
“I am already a lot.”
“OK, it’s just they’re creeping up.”

Hamilton: “Need to pick up the pace. Can’t let the Ferrari go away.”
“OK copy, copy.”

To Bottas: “So Valtteri it’s important you stay with Vettel. Lewis is in strat six behind on the soft tyre so you need to keep with Vettel.”
“Copy.”
“So Valtteri we need you to be within a second of Vettel, you need to be in DRS, and you’ll get a maximum of two laps to achieve that, OK.”

L21 To Bottas: “So please let Lewis go.”
“Can you confirm? I just pulled the gap to him in the last lap.”

“OK Lewis so close up to Valtteri. He’s been given the message.”
Hamilton: “If he’s picked up his pace, he should be OK. If I can’t catch him, if I get past, I can’t catch up a little bit.”
Just let us know what tag we’re in.”
Hamilton: “Tag two.”

L22 To Bottas: “So just focussing on getting that gap to Vettel down. Surface overheating is minor at the moment. But pressure’s so much better than the first stint.”
To Bottas: “So we want you to use the tyres to close the gap to Vettel. Target lap is minus one.”

L23 To Vettel: “Brake shape zero, suggestion for locking, seems under control. Bottas is 2.8 behind, should try to open this gap. Keep your head down, you are doing well.”

L25 Alonso: “How they can’t overtake me I don’t know. I never raced with less power in my life.”

Mercedes later decided to swap the running order of their cars.

L27 “And please let Lewis through. Lewis has a five-second penalty.”
Bottas: “Copy. I’ll let him through.”
“So it’s important you stay close to Lewis, obviously.”
Bottas: “These rears are overheating. The soft will be better.”

L29 To Vettel: “Pull the red button. Keep your head down. This is an important phase of the race.”
L31 To Bottas: “Box, going to soft tyres, going to be tight on exit, need a good pit stop.”

L32 Raikkonen: “Check what happened into turn four, low speed, there’s something wrong”
“We see the issue Kimi, I’ll come back with any action”
Raikkonen: “Come on it’s really disturbing. Is [unclear] the normal position?”
“Confirm but this is not the issue. Driver default A five on should fix the issue.”
L33 Raikkonen: “Something [unclear] lap time on the straight. The issue is still there.”
“Understood Kimi, understood, we’re checking what’s going on.”

“Fernando we are considering plan B, how are the tyres?”
Alonso: “Do whatever you want, man.”

To Ricciardo: “Raikkonen’s just pitted, he’s on soft tyres. We’re going to go a little bit longer to get a bigger advantage.”

To Hamilton: “OK Lewis we have a five-second penalty. We will take it at the pit stop. We will need to overtake Valtteri on-track.”

After being let past by Bottas again Hamilton closed on Vettel but wasn’t able to catch the Ferrari.

To Bottas: “Don’t hold Lewis up. He is two seconds a lap quicker, pushing for the win. Please let Lewis go.”