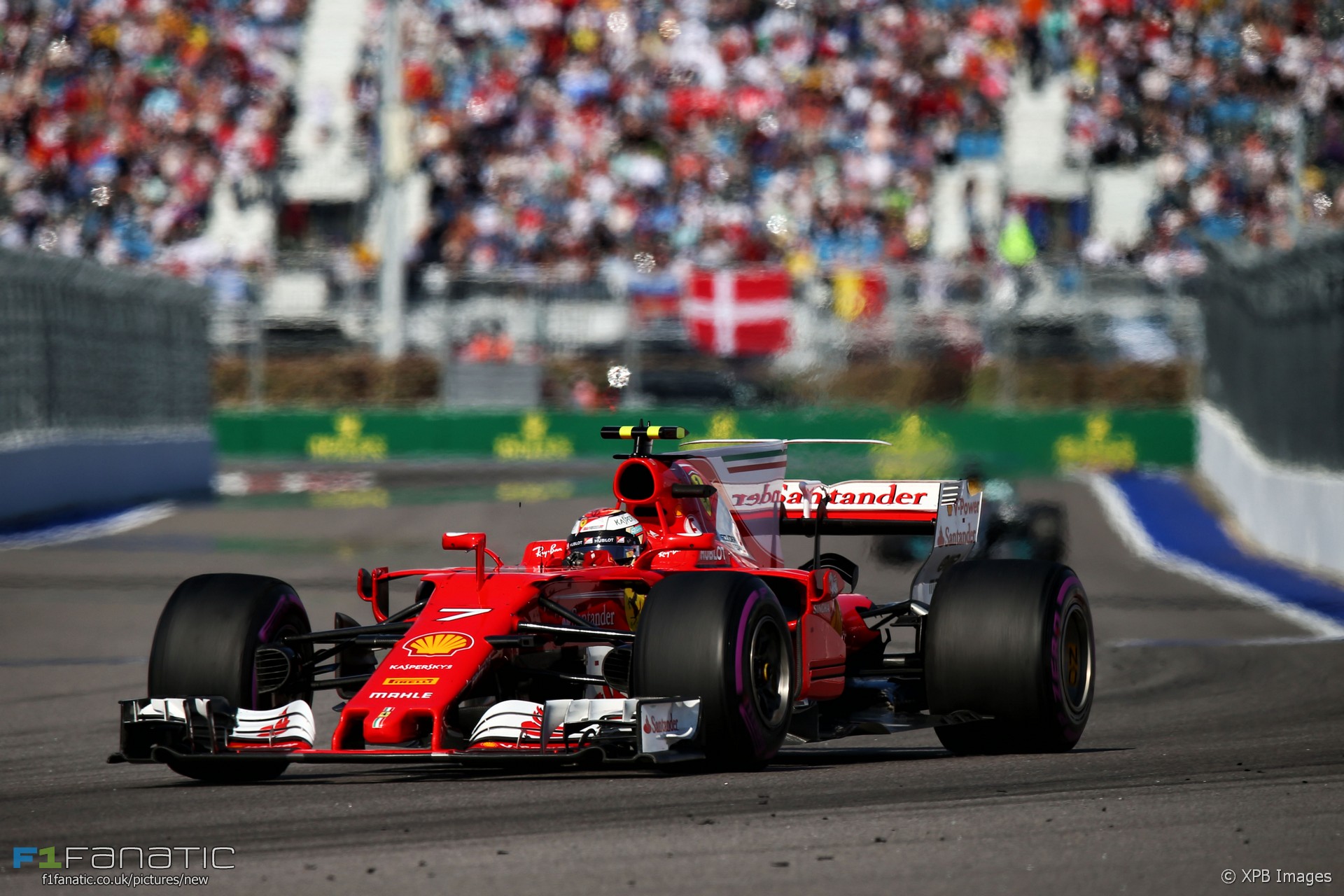 Sebastian Vettel was frustrated by Felipe Massa, Kimi Raikkonen was puzzled by Valtteri Bottas, and Kevin Magnussen was infuriated by the stewards. Here’s the team radio highlights from the Russian Grand Prix.

For once Fernando Alonso’s Honda power unit didn’t make him wait until the end of the race before breaking down. This time it stopped on the formation lap with a suspected ERS failure.

“Try three times please Fernando.”
Alonso: “I tried already so try yourself.”
“Don’t touch the buttons, we’ll fire it up.”

To Vandoorne: “OK Stoffel, Fernando had a car problem, he won’t start the race.”

Alonso: “OK, tell me what to do, if we’re retiring the car?”
“Please do a rolling power cycle.”
Alonso: “How I can do it?”
“Right hand side to the left, then to the right, then left-hand side off, then back on again. If you can pit, pit please.”

Romain Grosjean and Jolyon Palmer tangled on the first lap, ending a dismal weekend for both drivers.

Grosjean: “OK so basically Palmer turned into me. I don’t know why he wasn’t looking.”
“OK understood.”

Stroll: “I got pushed on the kerb and I spun.”
Stay as you are. Everything is fine.”

Hamilton: “Anything I can do for the restart?”
“There’ll be plenty of opportunities, Lewis.”

To Kvyat: “Obviously tyres are quite cold but no worries, it’ll be the same for everyone.”

The Safety Car appeared following the first lap crash, and soon after the race restarted Daniel Ricciardo joined those on the sidelines.

Lap 5 Ricciardo: “I can see my right-rear brake’s on fire. Keep me posted.”
“Understood.”

To Ricciardo: “OK Daniel come in slowly please. We have a problem with the rear brakes. Don’t take any risks.”

“OK Daniel box this lap. We are going to stop in the pit box and have a look. But Pedals will call whether we’re running or not.”
Ricciardo: “They’ve gone.”
“Yeah understood mate. If you can get back, roll back into the pit lane. We can see there is an issue, you’ve lost pressure in the rear brakes.”
Ricciardo: “Just be prepared to slow me down if I can’t.”

Hamilton: “Getting some cut-outs on power.”
“Copy that, we’re monitoring it. Nothing to worry about so far.”

Lap 10 Vettel: “Where are we losing the most compared to Bottas?”
“Sector one, mainly.”

Two drivers cut turn two at the start and failed to respect the instructions they’d been given on Saturday.

Lap 10 To Vandoorne: “Stoffel we have a five-second penalty for not going through the bollards on lap one. Magnussen the same.”

“We have a five seconds penalty for track limits in the race.”
Magnussen: “That’s not fair. I gave the position back. I passed the Williams and I gave it back.”
“OK. Try to settle down, long race ahead.”
Magnussen: “Did you talk to Charlie?”
“Yeah we talked to Charlie.”
Magnussen: “It cannot be right.”
“We cannot argue with the penalty. We have the race pace to score good points. Come on, settle down.”

Lewis Hamilton dropped back from the leading trio as his car’s temperatures rose.

Lap 12 To Hamilton: “OK Lewis we are borderline on temps. Just do what you can do. This is good pace.”

Lap 17 “We think other cars are struggling as well. We are not the only ones. It is hot out there.”
Hamilton: “Keep me up-to-date, please.”

Lap 18 To Raikkonen: “OK Hamilton is back pushing, I’ll monitor the gap.”

When Valtteri Bottas made his pit stop from the lead, Sebastian Vettel got his foot down in a bid to jump the Mercedes.

Lap 27 To Vettel: “Keep your head down. Very important phase of the race. Push now. We need everything.”

Lap 30 Raikkonen: “The rear is going.”
“Understood. Do you want to stop? Need an answer now.”
Raikkonen: “OK we stop.”

Lap 32 Hamilton: “Did we not stay out too long? I was losing a second and a half at that point.”
“Yeah we’ll discuss it later, Lewis.”
Hamilton: “Have I come out far behind?”
“Gap to Raikkonen now eight seconds.”
Hamilton: “How is that so big?”
“I think we lost a lot of time with that traffic, Lewis. Also it’s that new tyre advantage I think.”

To Bottas: “Critical that you get past Kvyat as quickly as you can, please.”

Vettel continued to pursue Bottas over the final laps but had to settle for second place. He was frustrated by Felipe Massa on the final lap as the Williams driver got between him and Bottas at turn two.

Bottas: “Over the last laps I want less talking.”

Lap 47 To Vettel: “Very good middle sector. Keep putting pressure. He will make a mistake. Four-tenths slower than you.”

“Yes! Brilliant! Well done!”
Bottas: “Ha ha! [Censored by FOM] me. Took quite a while. More than 80 races.”
“It did take a bit of a while but well done. Immense pressure. Well done.”
Bottas: “Worth the wait. The race team and the factory, thanks very much for making this possible. Also thanks family.”
“Well done mate, brilliant drive.”
Bottas: “Yeah thanks so much guys. It means a lot, difficult to say more, but very thankful for you too.”

“P2 Sebastian. Strong race, well done.”
Vettel: “OK grazie a tutti. Yeah the Williams at the end… I thought we might get another shot on the back straight. Yeah. Car was good today. Grazie a tutti. Grande lavoro.”