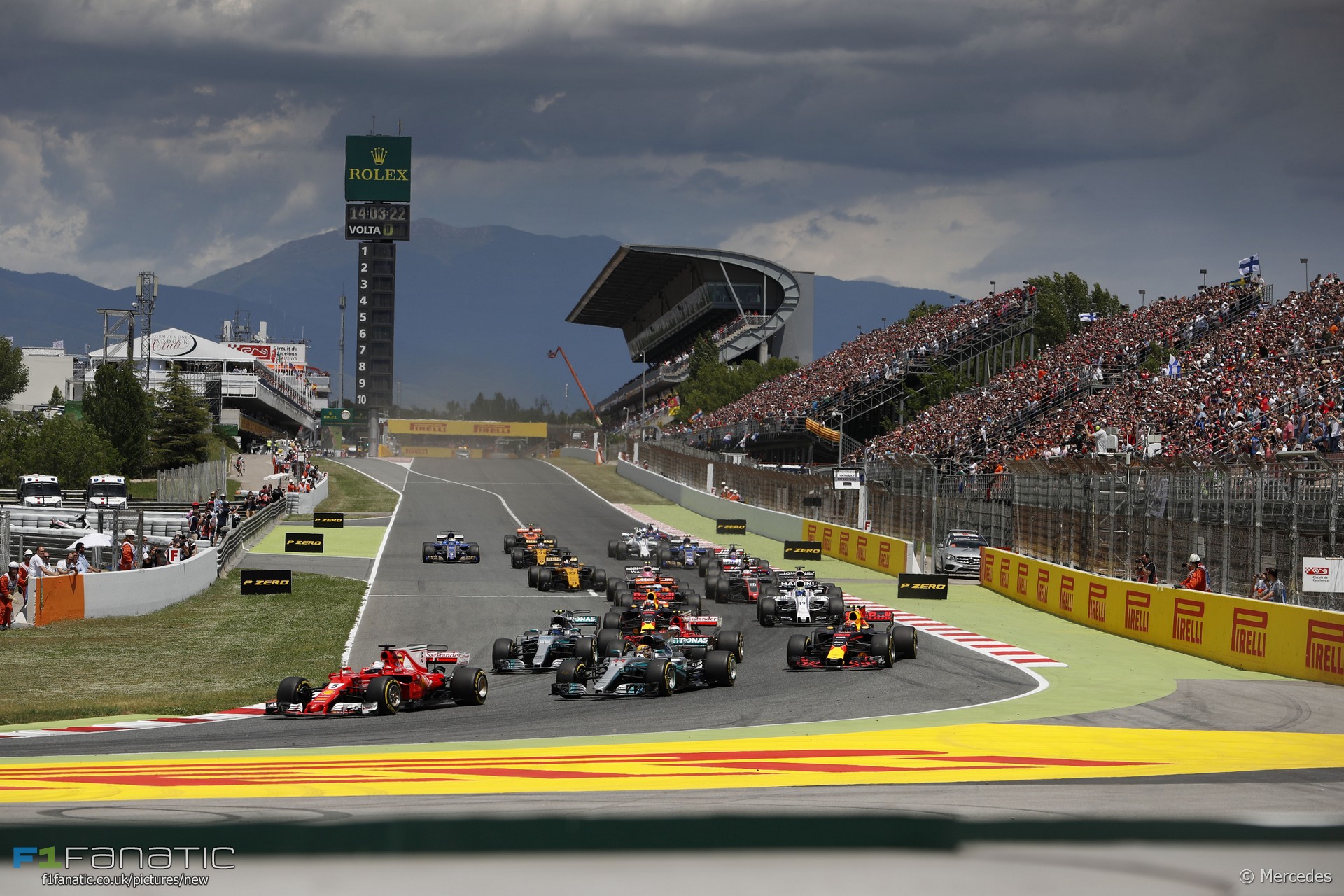 The Spanish Grand Prix featured something everyone wants to see but very rarely happens: an on-track pass for the win.

Unsurprisingly it therefore picked up one of the highest ratings of the season so far. An average of 7.85 is the second-best of 2017 to date, and well above the average for this track.

The yawning gap to the rest of the field was a cause for concern among some. And the ease with which Lewis Hamilton breezed past Sebastian Vettel raised questions over whether tweaking the Circuit de Catalunya’s DRS zone had been a wise move.

But most of your responses to the race were largely positive:

Absolutely stunning race, best so far. I had my heart in my mouth when Vettel and Hamilton were side by side. Great season so far. Another good performance for Force India, at this rate they can catch Red Bull.
@Illusive

First-lap incident. Contra-tyre strategies. Modification of strategy due to Virtual Safety Car. Disinformation via team radio and some fairly difficult and robust overtaking, towards the edge of legality (Vettel, looking at you in particular).

Even had grumpy old Massa doing what all older F1 drivers seem to do … blocking people trying to overtake, especially Hamilton and Vettel. (I was watching the Hamilton-Vettel gap on the F1 app, Massa was most responsible for their gap shrinking and expanding like an accordion.)
@Franton

Great duel between the two main-rivals for the 2017 world championship with Lewis Hamilton fighting hard to regain first position from Vettel and winning his 55th Grand Prix. This must be much more rewarding for him winning this way! Sebastian Vettel had the best overtake of the race when he past Valtteri Bottas in great and daring style. Let’s hope those two will fight this way all to the end, with the two Red Bulls coming more and more into the mix to make it yet more difficult!
Antoon van Gemert

The grand prix was much better than I expected it would be, beforehand I thought that whichever driver had the best start and was leading after the first lap would easily take the victory, even if another driver behind was quicker in the race I didn’t think they would be able to challenge or get past, I thought it would be a case of follow the leader throughout the field.
@PJA

The DRS zone was extended before the race began to make it easier for drivers to overtake on the straight. Views on how this affected the race were mixed:

Hamilton clearly was having issues finding a way around Sebastian but alas, the ‘train’ that DRS creates leaves a driver in front absolutely helpless. If Hamilton had gone around in turn two or three, or out braked Vettel into one that would have been amazing.

In the midfield, Ricciardo was alone, and subsequently nothing exciting really happened save the Sainz/Magnussen battle.

There was a genuine and tactical battle for the front that required pin point timing from Ferrari and Mercedes but ultimately that DRS pass murdered the race.

Please, for the love of god get rid of DRS!
Justin (@Boombazookajd)

I thought the DRS zone extension was a great move, meant people could actually pass on the street.

Really enjoyed the battle for the lead.
Rick Lopez (@Viscountviktor)

We got to see some interesting strategy being played out but we also got robbed of seeing cars fighting wheel to wheel by DRS. Passes aren’t entertaining. I could have happily sat and watched Hamilton battling behind Vettel, sneaking a look, taking some chances and generally racing even if the pass failed. Instead we got this.
Philip (@Philipgb)

This was a great example of the damage DRS does to racing. It was a great race up to that point but ultimately ended in disappointment because of a knee jerk reaction to extend the DRS zone after events in Sochi. We might’ve seen a masterclass in defensive driving from Seb today but instead he had no chance.
Jonny Edwards (@Racectrl)

The scale of the advantage enjoyed by the front runners also drew some comment:

Pretty good race for the lead, and it probably looks like it’s going to be Vettel versus Hamilton all season long.

When was the last time the whole field was lapped except the podium? Worrying, but at least Ferrari and Mercedes are pretty evenly matched.
Alex (@Arobbo)

I doubted the Mercedes strategy, still not sure if they’d have done it without the Virtual Safety Car. Enjoyed the race. Good bit of F1. However lapping everyone up to fourth? Hmm…
@pSynrg

The Spanish Grand Prix also received much praise on Twitter. Here’s a selection of views from race day:

Its not very often you see the race winner pass during the race, ftw, not using an undercut, or taking advantage of slow starters #F1

#SpanishGP Best race so far! Win for @LewisHamilton and fairplay to @PWehrlein p8 👏 35 laps on softs and strategy spot on! #Driveroftheday

The Spanish GP was the best of the season so far after watching it back. Had great strategy & overtakes on a track that is usually dull #F1

Vettel passes Bottas. Wow! One notable pass in the race. Look out #V8SC, F1 is coming for you. ;-)

Some sloppy racing from midpack in Spain, and usual whining from a certain car. Actually a good race though despite that. #F1

Cracking F1 race today! Sounded like all the drivers had to really push hard.

Just watched the race. Damn that was good! Best of the season so far. #SpanishGP #F1

#spanishgp what a race!.this looks like its gonna be the best season in recent years.Motorsport has been waiting!!

The #SpanishGP was absolutely magical – fantastic racing, just superb! And a fantastic win for @LewisHamilton and @MercedesAMGF1

What a great race at the #SpanishGP …this year has been great overall, 3 great races out of 5. #F1

No spoilers, but that #f1 race was amazing. This season is proving to be action-packed. #SpanishGP #MercedesAMGF1 #FerrariF1

Caught up on the #F1. #SpanishGP is race of the year so far. Finally saw the Hamilton/Vettel fight we've been waiting for

Well the F1 race control clowns showed their greasepaint again by not penalizing 44 for turn 1 breach of rules. #SpanishGP

Bored of the @F1 … Need something new to happen or some new faces! @bbcf1 #Formula1

Disappointing F1 race in Barcelona Spain, something has to be done to equalise teams as it has become very boring!

Just watched the F1 race. Damn, I have to stress again how much the Mercedes/Ferrari fight 😂 The fight for the lead went on the whole race!

Loving #F1 2017! We've waited so very long for a proper tussle, but nobody is enjoying it more than @LewisHamilton & #Vettel! 😄😄😄#SpanishGP

Excellent F1 so good to see such a good team player in @ValtteriBottas. Well don @LewisHamilton and @MercedesAMGF1 for the win today

Was all excited with 30 laps to go in #SpanishGP but it was a bit of a damp squib for the win. Pleased #Seb5 still smiling though.

This year's #SpanishGrandPrix was one of the best @F1 races I've seen in a while. Tough luck @LewisHamilton5! Good race @MercedesAMGF1

#F1 is back! #F1Barcelona great to see some competitive racing between #lewishamilton and #Vettel 😎

Not a bad Grand Prix. Looks like the Vettel Hamilton battle will go the season. Been a while since there was a good 2 team fight #SpanishGP

Breathless #SpanishGP, #Ham and #Vett both outstanding. No room for error. Great to see two drivers going at it so hard, for so long #C4F1

Another crap GP. You can try and dress it up but essentially nothing happened again other than one tyre based overtake #SpanishGP

Well, I dont know about you but I quite enjoyed that! #F1
Massive congratulations to @ForceIndiaF1 @SChecoPerez and @OconEsteban 👏👏👏👏👏👌👍😀😙🐝

That was an incredible race! Getting to see Lewis and Seb race wheel to wheel was awesome and is exactly what F1 needs. #SpanishGP

In all honesty, wasn't expecting much from the #SpanishGP some races here I've watched have been a bit dull, so am pleasantly surprised!

Only just caught up with the F1! What a race! SO enjoyable! Wish F1 was that close every weekend

This is some race and a half. Wheel to wheel. What last season was missing #SpanishGP

Great #SpanishGP! Brilliant by Vettel, selfless by Bottas and relentless by Hamilton – letting it all hang out.

Caught up on the #SpanishGP, highlight wasn't the amazing overtakes, but the little lad meeting Räikkönen. Kudos to who made it happen! #F1

That was an enjoyable race. Shame its to be followed by the pretend-race that is Monaco #F1 #C4F1

A very good #SpanishGP , I still believe that #Scuderiaferrari lost the race which they should have won from the outset.

Just finished watching the race and what a treat that was. If Barcelona can produce that, the rest of the season could be a classic #F1

F1 finally giving some entertainment. Well played Ferrari for catching up and giving us some action at the top 👏🏻

#F1 is actually a tad exciting so far! Go Lewis!

What an amazing @F1 race today! This season is turning into a classic, great time to be part of this amazing sport #SpanishGP #F1 #Pro53

Did #Formula1 just suddenly get a bit exciting again? Been a while… #F1

Finally! Some wheel-to-wheel action with #Vettel vs. #Hamilton. This is more like it! #SpainGP #BarcelonaGP #F1 #C4highlights

F1 was on point today

#F1 needs to look at how to balance the sport. #Hamilton & #Vettel almost lapped #Ricciardo in P3 #SpanishGP #Formel1 #formeluno

#SpanishGP was a two car race. Third place was 1min.15sec. behind the winner. All other cars were +1 lap down at the finish! @LewisHamilton

That hamilton overtake on vettel. I live for moments like that. @MercedesAMGF1 #SpanishGP #F1

That was a weird #SpanishGP. Some good racing but what in the world is going on with @WilliamsRacing. Horrendous showing. Lewis all class.

Can't get into F1. It's like reading from an Excel Spreadsheet live on TV. Dull.

If there was one race to be the winner of this year, THAT was it in Spain #GreatRace More of that please F1. Great stuff @LewisHamilton

Everyone's raving about Vettel. Was there an overtake in F1? 😳 #F1

On an #F1 note, how much better off is this season already for having another team competing with Mercedes.

A good #SpanishGP race upfront between Hamilton and Vettel. Intense part was in the middle and not the end this time. Two team fight = 👍🏁

Amazing #SpanishGP, the duel between Vettel and @LewisHamilton we've been waiting for donkeys years! #F1

Suffice to say I enjoyed the #SpanishGP. Season's turning out to be rather a good one. #F1

I have to say that the Spanish GP was rather exciting today :-) #F1 #F1Barcelona

If you haven't watched a Formula One (F1) race, you're missing out on the best racing in the world right now.

#F1 Get rid of DRS, this is anti racing.