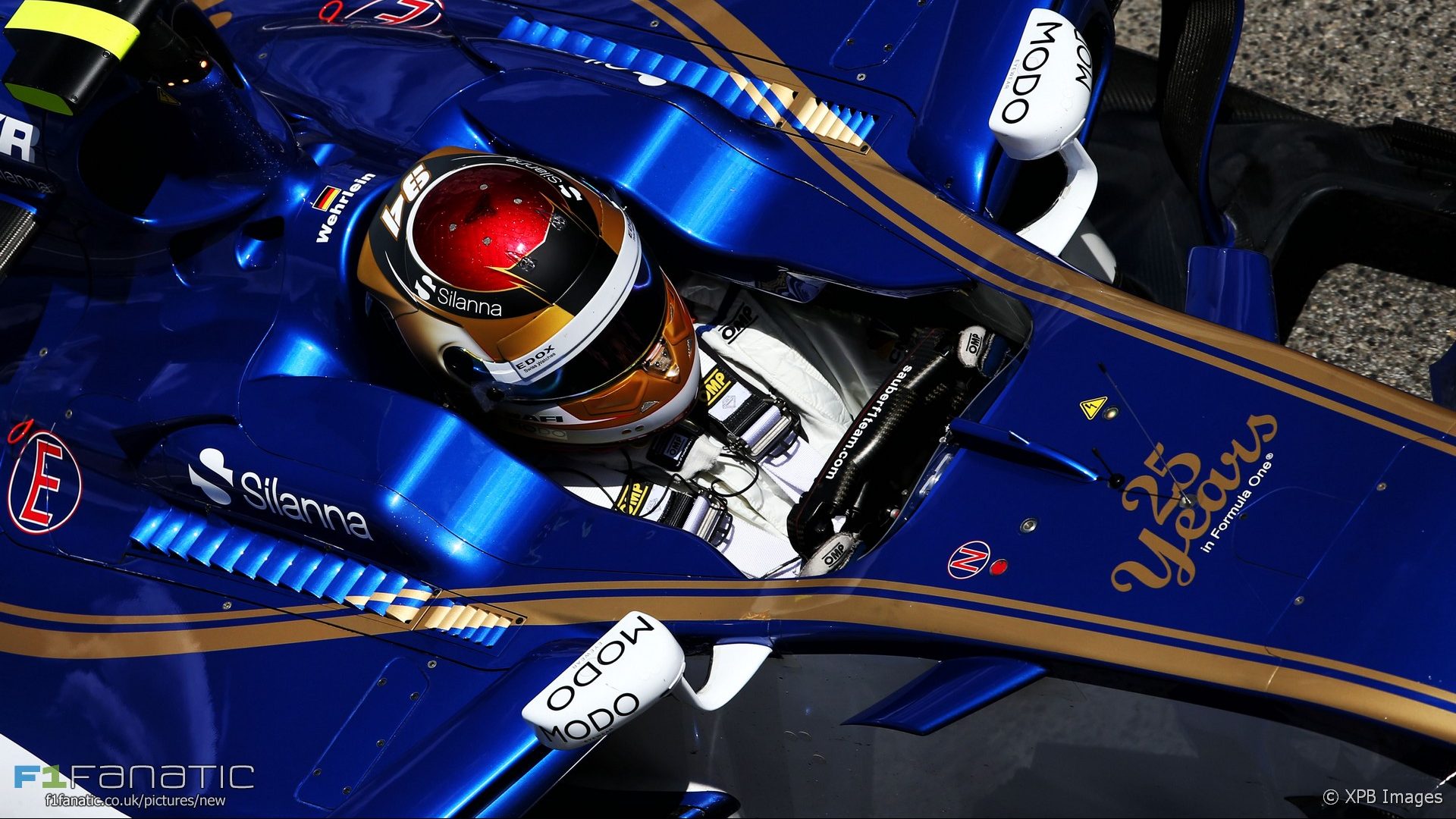 Wehrlein previously won Driver of the Weekend for his breakthrough points finish for Manor in last year’s Austrian Grand Prix.

Wehrlein got his car into Q2 and lined up 15th on the grid. His start wasn’t especially spectacular – he only made up three places, most of which came because of collisions ahead of him. The strategy was what made his race.

Running a long first stint on soft tyres allowed Wehrlein to make up several places and avoid the usual Catalunya disadvantage of being stuck in traffic. It allowed him to reach the end with just a single further stop.

However he slipped up during that sole pit stop, cutting across the pit lane entry and earning a five-second penalty. That ultimately cost him seventh place to Carlos Sainz Jnr. Nonetheless this was a highly impressive drive.

Some very impressive driving, and also some not-so-impressive driving throughout the field, but only one driver punched massively above his weight. Pascal Wehrlein did an Alonso by putting his Sauber somewhere it didn’t belong, not cracking under the enormous pressure applied by Sainz while almost keeping up with the pace of Hulkenberg in front of him.

His penalty for taking an illegal line into the pits is but a minor flaw that pales when compared to that monstrous first stint of his. 33 laps on soft tyres, while maintaining a pace that was still faster than his team mate’s on 18 laps fresher tyres of the same compound, allowed him to skip a round of pit stops and score some vital points for his ailing team. Simply impressive.
Nase

Excellently composed drive. He seems to have matured a lot since USA last year. Managing to fight off Sainz, as well as pull away from the gaggle of cars along with Sainz meaning he only lost one position with the penalty, especially considering those cars behind him (the Haas and Toro Rosso) are all much quicker cars.

Got into Q2 on Saturday (although just .005s ahead of Ericsson in Q1, but still), and then made the one-stop work to perfection to get into seventh. And to those saying the VSC helped him – all the cars behind him also pitted under VSC, so they came out exactly where they went in (except Hulkenberg who did leapfrog Wehrlein in the pits).
Hugh (@Hugh11)

More than just the solid drive he put in for his comeback. Russia was little less than rubbish from him but this weekend. What a drive. Yes the front row had us knowing with tention at the nearest thing we could get our chops round. But Wehrlein just showed his brilliance. Who knows what he could have done for Manor had they been here and had their car been as competitive as it looked. Potential to be a one with his name in the record books.
@Greggriffiths

Lewis Hamilton earned praise for his second win of the year which he scored despite losing his advantage from pole position at the start.

A well-timed pit stop during a Virtual Safety Car period aided Hamilton’s effort to wrest the lead back from Sebastian Vettel.

Gave it to Hamilton. Fastest in all but one session. Fastest lap. Keep calm during the race, was relaxed and smiley during interviews.

My take is that the Mercedes was very, very marginally the fastest car, but Hamilton needed to give it all to bag the win.


Hamilton and Vettel were superb today. Hamilton sounded absolutely wasted on the radio, and he was resting his head already with 20 laps to go. It looked like a serious physical challenge between the two, a flat out battle. Fantastic.

If I were to nitpick, Vettel wasn’t “perfect” during the weekend, he made a mistake in qualifying. So my vote goes to Hamilton.
@Fer-no65

I voted for Vettel because I firmly believe that he should and would have won this race but for his team’s strategic error. He did everything right himself – managed to claim a front row grid position after engine problems earlier in the weekend and get the jump on Hamilton at the start and maintaining the gap ahead. The combination of Mercedes’ strategy, team tactics (with Bottas) and the VSC timing won the race for them.
@Loup-garou

There was plenty more praise for Wehrlein and Hamilton on Twitter, but Lance Stroll and Jolyon Palmer’s efforts were less well reviewed.

Just want to thank @LewisHamilton for making my wknd your win pole n fastest lap was the only good thing about this wknd. #SpanishGP #44

Hulkenburg had an awesome race. 13th to 6th and had some genuine pace. Brilliant drive! #F1 #SpanishGP

Growing up, I've come to love all drivers and don't really hate any of em. Apart from Palmer. He's terrible #F1 #F1fan

one thing about F1 and latest Bottas results just goes to show that F1 is lately all about the car and not the pilot !!!

Great to see the FIs 4th and 5th, and Weh p8 but let's not hail it as amazing. They're all pretty much in their normal position. #f1

#F1 #SpanishGP Watching re-play, I can see how vital tyres & @ValtteriBottas were in the mid-20s laps in securing victory for @LewisHamilton

Bottas and Kvyat are naturals, but have to learn to play the long game and avoid unnecessary collisions. #F1

Hamilton takes the glory, but Wehrlein & Sauber performance of the day for me. Solid 8th, one stop strategy worked. #F1 #SpanishGP

Elsewhere, impressive drive from Wehrlein while Stroll and Palmer don't really look like they should be there on that showing. #SpanishGP

I've been leaning towards it for a while now but today's race fully convinced me – @PWehrlein is now the #F1 driver that I'll be supporting!

Great win for @LewisHamilton in the #SpanishGP

Also cannot understate what a great job @PWehrlein and Sauber did to get P8. First ever F1 points, the guy is a top class driver #C4F1

Make sure that you share the Champagne with Bottas tonight Lewis, he's your new best mate. #F1

Classy teamwork from @ValtteriBottas but utter determination from #Vettel – what a pass!! 🏎🏎 #SpanishGP

Just caught up on the #F1 #SpanishGP brilliant drive by @LewisHamilton 😁

Really don't think #Bottas is a #Mercedes driver, yeah won a race but overall he hasn't been great. #C4F1 #SpanishGP

The big rivalry in 5-10 years time will be Verstappen-Ocon. Already two of the best and neither has reached his 21st birthday! #f1

So #lewishamilton only won because #Bottas held up #Vettel #C4F1 #SpanishGP

OK, that race was pretty awesome, I am happy. 8/10 and DOD for me was @PWehrlein , but a brilliant effort from the entire grid! ☺️☺️☺️ #f1

Also, Perez is new most underrated driver in #F1. Beat the Hulk, set to be best of the midfield 2nd straight year. Ferrari, sign him please.

Buzzing for @LewisHamilton today! You could tell how much he wanted that. Radio messages said it all#f1 #circuitdecatalunya

I hope @LewisHamilton thanks @ValtteriBottas for his drive today. Proved he is a class team player. @MercedesAMGF1 #F1

Get the Spaniard back at Renault!! HULK has shown the way this weekend.. #SpanishGP #C4F1

Hamilton is easily the best driver in #F1. I almost said 'the world' then, but rally drivers exist

Hamilton so out of breath, don't think I've ever heard that before. Sure it's nothing to do with sacking his PT #f1

Very surprised to see RIC on the podium. I only realized he was 3rd on the penultimate lap. Was like "Where did RIC come from?" #SpanishGP

Get in!!…….. Another epic overtake from #Vettel #SpanishGP #GrandPrix #GPSpain

Watching the F1 and Bottas was defending off Vettel like a champ. He truly deserves that car and will be a future world champion.

Omg. Vettels move on Bottas was amazing! Exactly why DRS is required as long as its not overpowered #spanishgp #c4f1

I like @ValtteriBottas but if he continues to be Lewis's bitch, Toto will buy a leash & take him for walks with Roscoe #Ferrari #SpanishGP

Fernando Alonso could have a descent performance in #F1 even with the engine of a van.

Bit rich of #verstappen to get annoyed at somebody else for contact. He's been treating his car as a dodgem for over a year now!! #C4F1 #F1

Can somebody explain me why #Seb5 is #driveroftheday but not @PWehrlein who finished just with 1 stop on his highest ever pos.? #SpanishGP

Lance Stroll might be the worst driver on the #F1 grid. Complete lack of pace & shown up by Massa. Massive downgrade from Bottas #SpanishGP

32 comments on “Second Driver of the Weekend win for Wehrlein”