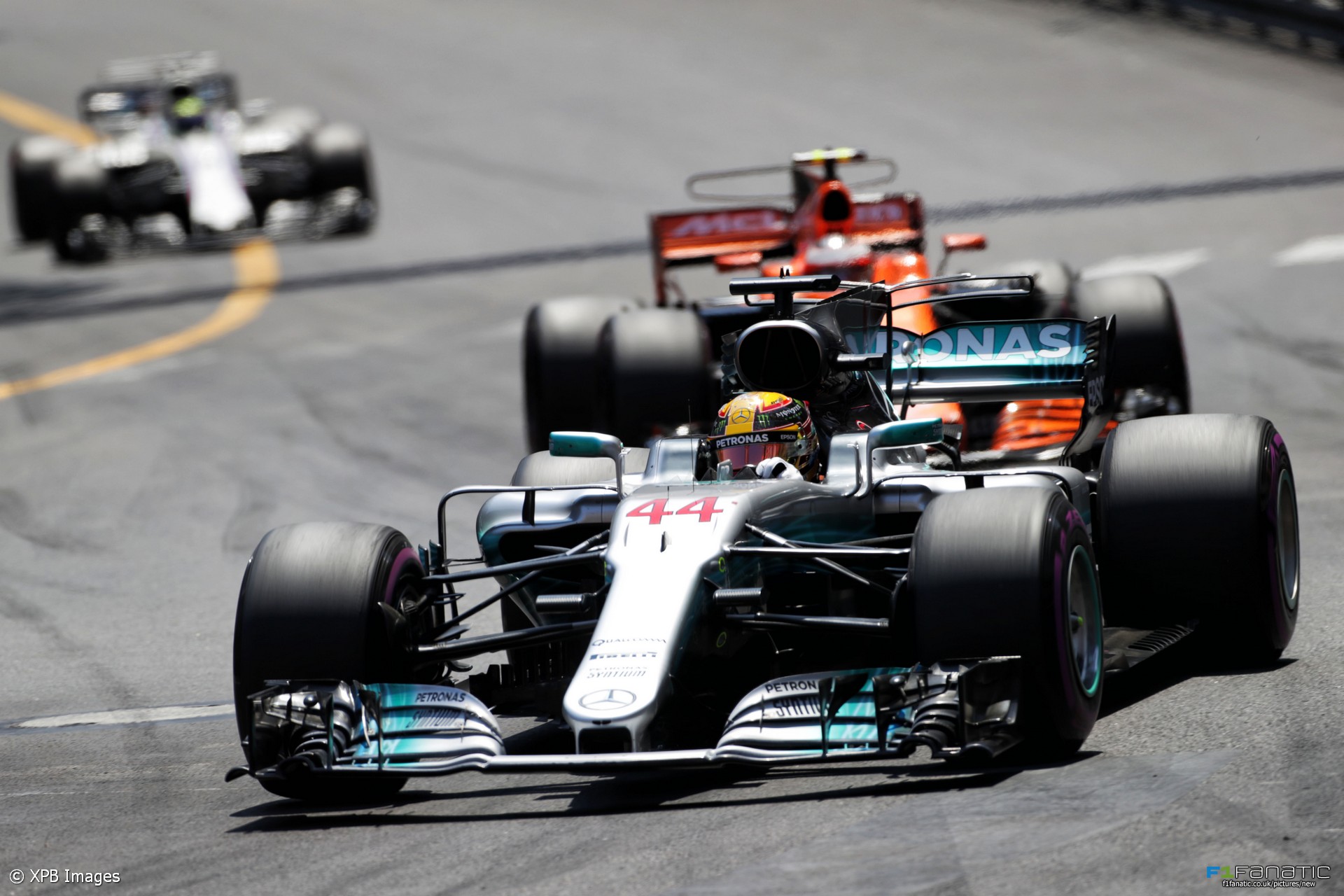 Lewis Hamilton told his team “the battle’s not over” at the end of a disappointing Monaco Grand Prix for the Mercedes driver. Here are the team radio highlights.

Fernando Alonso had a pre-race message for Jenson Button, who took his seat for this race.

Alonso: “Jenson my friend I am sure we wanted to hear my voice just before you started the race. Take care of my car.”
Button: “Thank you. I’m going to pee in your seat!”

Hamilton played the waiting game early in the race.

Hamilton: “It’s hard to get close to these guys.”
“Copy that, Lewis. Our race comes later.”

To Perez: “Checo how is the aero balance? We think there is small end plate damage.”

Traffic quickly ceased to be a concern for Nico Hulkenberg.

“OK Nico, are we being held up?”
Hulkenberg: “A little bit. For sure if he wasn’t there could go quicker.”

Hamilton: “Does the car seem OK? Grip is poor, handling is all over the place.”

Ericsson: “I nearly hit the wall. So difficult to drive this car, no grip.”

Raikkonen was held up by Jenson Button.

Raikkonen: “Come on, how close do I have to get?”

To Raikkonen: “OK, let’s get back in the groove now Kimi.”

Kvyat: “I had a big spike of engine braking in turn six. Big snap.”

Button: “Oh, this is painful.”

To Raikkonen: “Box this lap, Kimi.”

“Checo, engine temperatures are now critical. If you can’t overtake you need to drop back.”
Perez: “You boxed me because of safety. Who cares if the engine blows up now?”

Max Verstappen also lost out through the pit stops.

A pair of punctures caused concern about the state of the track.

To Grosjean: “Romain, Kevin and a Force India had a puncture from turn one on the left.”

To Bottas: “Possible raised manhole cover exit turn one. There have been some punctures.”

“Hamilton: “How’s the pace?”
“Pace is very good, Lewis. You’re the fastest man out there at the moment.”

“To Button: “Track is breaking up at the exit of turn one.”

Looks like the resurfacing at the apex of Sainte Devote.”

Jenson Button tangled with Pascal Wehrlein and the pair retired, the Sauber perched on its side at Portier. During the ensuing Safety Car period his team mate Marcus Ericsson crashed out.

“Are you OK.”
Wehrlein: “Yes. It would be better if I could jump out.”

Stroll: “I’m losing a lot of brake temp. If I don’t brake I’m going to lose temperature and crash.”

Verstappen took another set of ultra-soft tyres for the final laps but was was unable to pass Valtteri Bottas.

To Verstappen: “Let’s get stuck into Bottas.”

“If you’re comfortable, strat six.”
Bottas: “Does it look comfortable?”

“To Perez: “Yellow seven drive position nine and green cal one.”
“Guys you really want me to crash? Stop [censored by FOM] around.”

Hamilton: “The battle’s not over, guys. Let’s take these points.”

“You deserved this one.”
Vettel: “The two laps with the old tyre I was giving everything I had.”