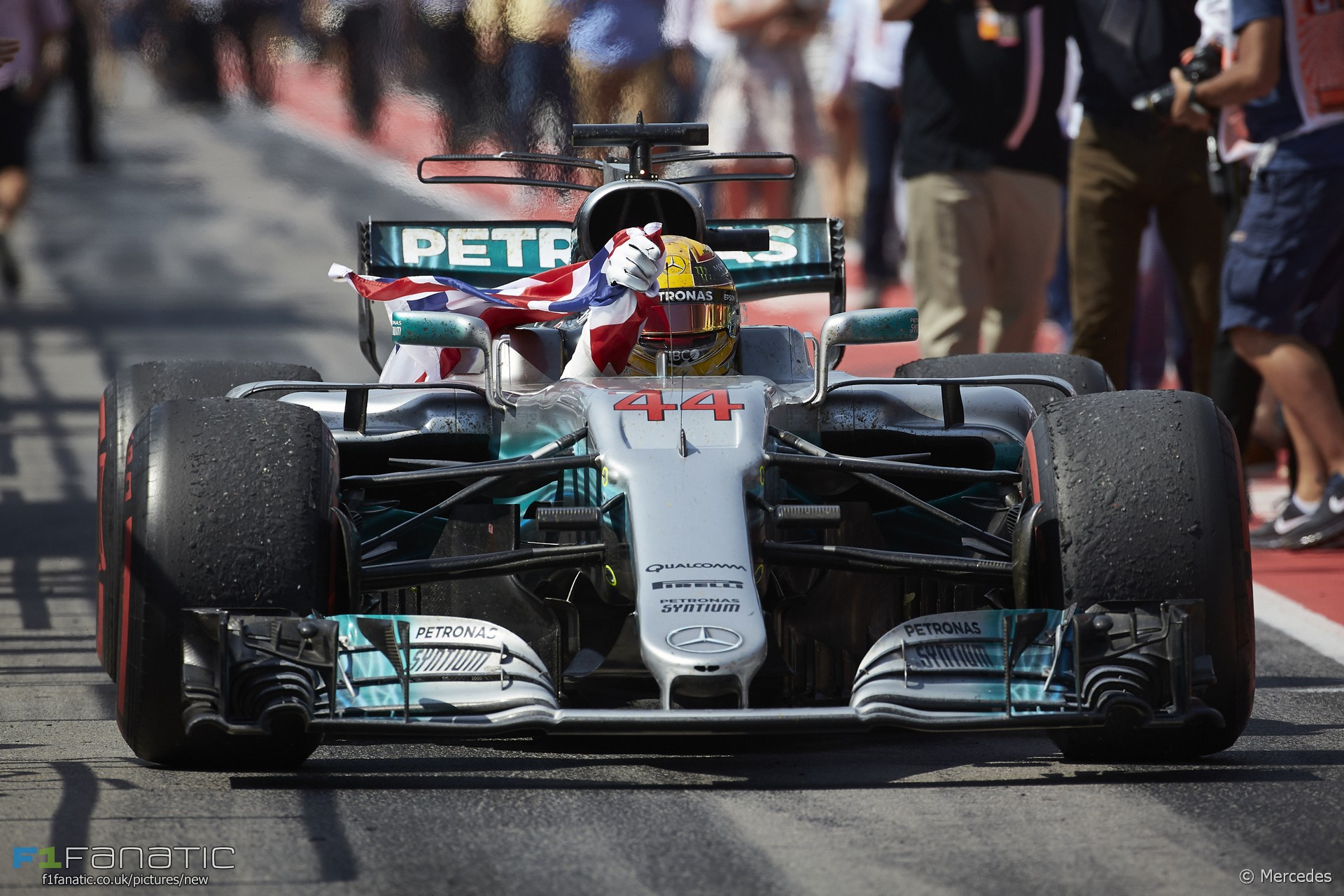 Lewis Hamilton topped the Driver of the Weekend poll for the 22nd time after winning the Canadian Grand Prix.

Since Driver of the Weekend began in 2011 no driver has won it more times than Hamilton. Here’s what F1 Fanatic readers made of his latest race and poll victory.

Hamilton’s devastating performance in qualifying was down to more than just Mercedes turning their engines up. He kept something in reserve, too: his pole position lap time was a full second quicker than he’d gone in Q2.

A clean start meant his race was fairly straightforward, other than having to brush off an attack from Max Verstappen at the restart. He easily had the pace to put a comfortable gap over his team mate, and from there on he was able to save his engine for another day.

Lewis Hamilton is the logical choice for me. Absolute beast this weekend. Already one of the best qualifying laps I’ve seen, killing Bottas by seven tenths, a margin you don’t except at the top between two top drivers, but Hamilton is something special at his peak. He’s not always at his 100%, but when he is there’s nobody on the grid close to him. Perfect race too, his pace was amazing.
@Francorchamps17

Yes he was out front the whole time and didn’t ever have to get his elbows out the way Seb did, Hamilton was on absolutely blinding form this weekend. Near-perfect pole lap, wins the race at a canter, leads every lap and scores fastest lap. Grand Chelem. Top stuff. Vettel’s recovery drive was brilliant and Ocon drove his socks off, but Lewis owned the entire weekend. And that’s coming from someone who isn’t a Hamilton fan.
Lewis McMurray (@Celicadion23)

Hamilton was sensational this weekend in both qualifying and the race, absolutely inspired driving. Nobody comes close although I felt Vettel had a good one and Hulkenberg was very unlucky with a slow pit-stop otherwise he could be near the front scrap and the Force India pair were good.
Kavin Kannan (@Lolzerbob)

Sebastian Vettel earned plaudits for his recovery to fourth having fallen to the back of the field during the Safety Car period.

It was a good day for the rookies too. Esteban Ocon did a solid job on his first visit to the Circuit Gilles Villeneuve and arguably deserved more than sixth place. And Lance Stroll became an F1 points-scorer in front of his home crowd.

Vettel for an amazing drive having to recover from something that was not his fault. He pushed that Ferrari past its limit all weekend. Took risks that paid off.
Andre Furtado

I went with Ocon, simply because he didn’t drive like it was his first time around the track. Traded blows with his much more experienced team-mate in qualy but marginally lost out, and was potentially even faster on raceday. Very impressed.
Aaditya (@Neutronstar)

I voted for Lance Stroll simply because as a true rookie at his first F1 home race I am sure he felt an amazing amount of pressure to not screw up in front on family, friends and fellow Canadians. He surpassed his previous races by scoring his first point.
@Racernorriski

Lewis Hamilton has won more Driver of the Weekend polls than any driver since F1 Fanatic began them at the beginning of 2011. This weekend was his 22nd time his topped the poll, but his last win had been 12 months ago:

Hamilton earned much praise for his victory but Vettel and Stroll’s results also won admirers. Opinions were split as to whether Force India’s drivers were at fault.

Hamilton utterly dominant in #Canada. #Honda let Alonso down again! McLaren has to find another engine to keep his interest next year #F1

Sergio Perez should be ashamed of himself for disregarding team orders in that scenario. He cost his team a podium today. #F1 #CanadianGP

What a drive by Sebastian ❤️ #Formula1 #CanadianGP

Stroll was my driver of the day. Very mature drive. Overtook with confidence. Shut the haters up. Well done @WilliamsRacing #F1👍👍👍

Nice to see @LewisHamilton giving @lance_stroll a thumbs up while lapping him to say he's doing a great job despite the criticism. #F1

Accident with Grosjean & Massa proved once again why Sainz is still not quite ready to join a top team. A little more polish required. #F1

Fantastic recovery drive from Vettel earns him P4, and keeps him ahead in the Championship, albeit by a smaller margin (12 points)… #F1

Congratulations to @lance_stroll on his first ever F1 points! At home as well, way to make 🇨🇦proud! #CanadaGP

Great drive from @HulkHulkenberg very consistent this year and continues to prove why he's my favorite #F1 driver :)

Ocon reminds me of Bottas a little. Looks like a talented driver who is in a second-tier car who will get a call from a top team soon. #F1

Dear @OconEsteban if you hope to get far in F1 hoping to let you pass, you can go looking for work elsewhere….

Oh no! That's horrible for @Max33Verstappen & @redbullracing after Max had that amazing start! Sounds like it was an electrical problem #F1

Max verstappen must be fuming , he honestly deserved a podium finish in this race #f1

Alonso is racing beautifully, he is currently at P7. #CanadianGP #F1

Ocon is driver of the day already#CanadianGP #F1

Excited to see what Ocon can do today 👊 #CanadaGP #F1

Esteban Ocon is driving a blinder. Just pitted from second place. He's right in the mix. This is a great race. #CanadianGP

Been impressed with Esteban Ocon all year. Great to see him right in the mix here. Looks every inch an #F1 star of the future.

Perez is being so selfish.#CanadianGP #F1

Perez was driving for @redbullracing today not @ForceIndiaF1 #CanadianGP #F1

Great recovery drive from vettel. Stroll bagged his first points. Ocon definitely would have been in with a shout of p3. #CanadianGP #F1

Kimi Raikkonen should consider retirement from F1, to allow space for a hungrier driver, how can you willingly yield a position in race

Absolute masterclass in how to win a race @LewisHamilton well done Lewis. Some valuable points for you and the team today. @F1

Tuppence worth on Force India gate. All very well sticking up for yourself but gut feeling is PER took it a bit far. Certainly cost team #F1

Great job from @danielricciardo, he earned that podium after these last laps. #CanadianGP

Majestic drive from Lewis Hamilton 10 years after his 1st ever #F1 win at #CanadianGP. Problem is Vettel was majestic too.

Lost some respect for Sergio Perez today. Put himself ahead of the good of the team. No offence to FI, but maybe that's why he's there. #f1

Another good haul of points for Force India, but should have got more. Super recovery by Sebastian Vettel. Lance Stroll's first #F1 points.

I swear PER owns Force India. They used to screw Nico so he'd have a better position. Now they let him lose the team a podium. Idiots! #F1

Superb drives by HAM and BOT to pick up valuable championship and constructors points. Great recovery by Vettel. An epic season so far! #F1

What a SPECTACULAR Canadian GP! And I'm sorry but Sebastian Vettel is without a shadow of a doubt the Driver Of The Day! #ForzaFerrari #F1

An entertaining race at the #CanadaGP. Ocon and Vettel my drivers of the day. Hamilton in a different league – well deserved! #F1

Epic Race for @HaasF1Team! Way to dig that one out @RGrosjean P10! Plus I was there to witness it for my first F1 race!

Alright, credit where credit is due to @lance_stroll for a finish in 9th – in the points from 18th where he started. #CanadianGP