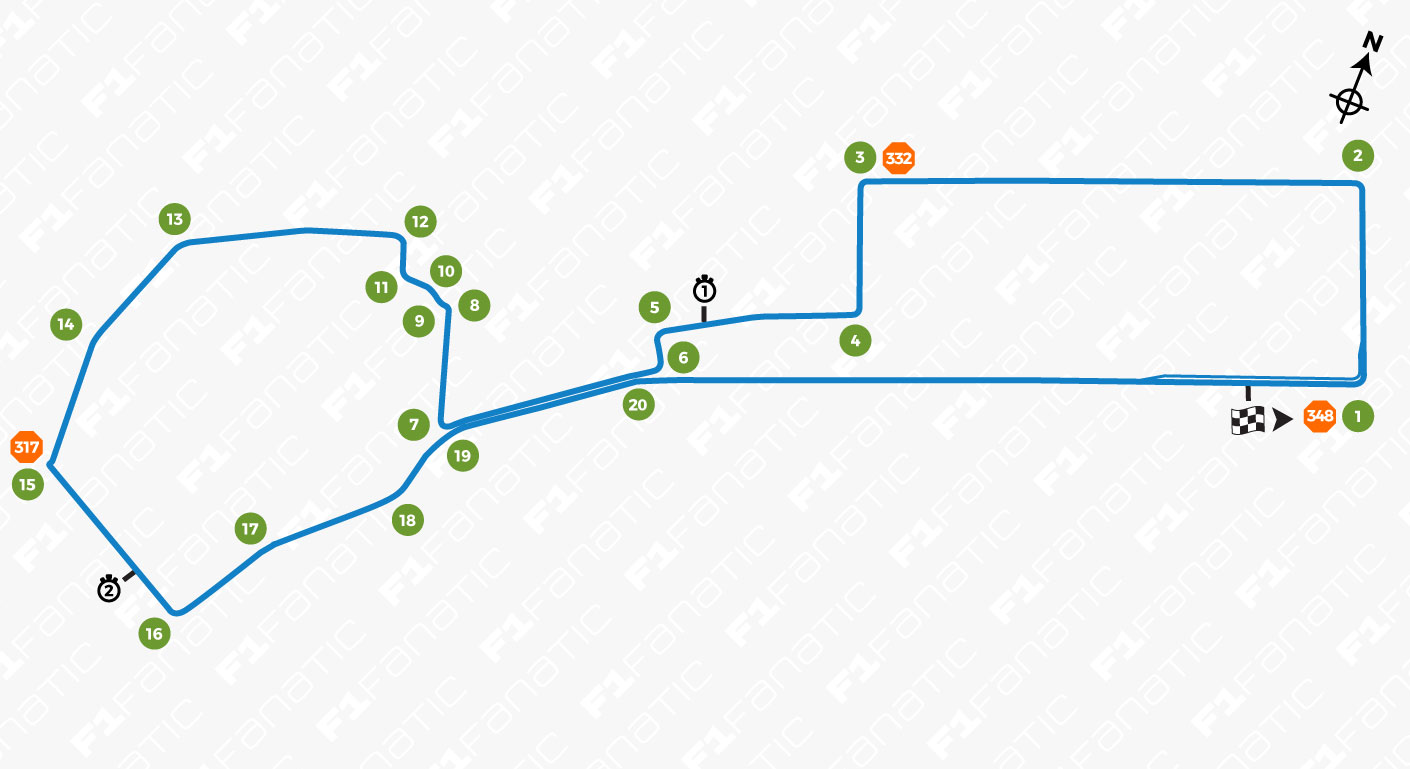 A second DRS detection point has been added to the Baku City Circuit for the second race on the Azerbaijan street track this weekend.

The course previously had a single DRS detection point which allowed drivers to lower their rear wings in the zones approaching turns one and three. For 2017 a second detection point has been added at Safety Car line two shortly before turn two. Each DRS zone will be triggered by the detection zone prior to it.

The rest of the six-kilometre circuit, the second-longest in F1, remains unchanged for the Azerbaijan Grand Prix weekend.

A lap of Baku City Circuit

Drivers hit some of the highest speeds of the year as they approached turn one last year. Williams recorded Valtteri Bottas hit 378kph (234.9mph) on his qualifying lap.

The long straight means the brakes get plenty of time to cool before slowing the cars for the first of many 90-degree turns. A brief blast to another, at turn two, is followed by another substantial straight. Broken kerbs created problems during the GP2 sessions last year (as did a grid in the pits during F1 final practice). These faults will need to be ironed out as F1’s much faster 2017 cars will give them an even greater pounding.

The first part of the circuit is all “big straight lines and then big braking into 90-degree corners”, explains Romain Grosjean. “It’s not the most exciting, but it’s good for overtaking. Then later the track changes a lot.”

After six right-angled bends the drivers approach turn seven, briefly running parallel with the final stretch of the lap. Another very slow corner leads the drivers to the old city section of the track. Turn eight is followed by several bends in quick succession as the cars filter through a narrow section of track past tho Qosha gate. “The castle complex will be especially close with the wider cars,” notes Nico Hulkenberg.

Lewis Hamilton wrecked his car, his qualifying effort and his race weekend on the unforgiving barriers at this section of the track last year. From turn 12 the course widens again, and the cars build up speed through two quick left-handers before approaching turn 15.

This curved, downhill braking zone with a narrow run-off area proved one of the trickiest parts of the circuit 12 months ago. Several drivers were claimed by the barriers here, including Daniel Ricciardo during practice.

The approach to turn 16 is also downhill but more straightforward. From there the drivers plant the right foot and keep it down through a succession of quick, blind corners. The track suddenly narrows as the approach the start line, from 18 metres to just ten.

The pit lane entrance on the left is passed at great speed, so last year the drivers were forbidden from crossing the entry line as a safety measure.