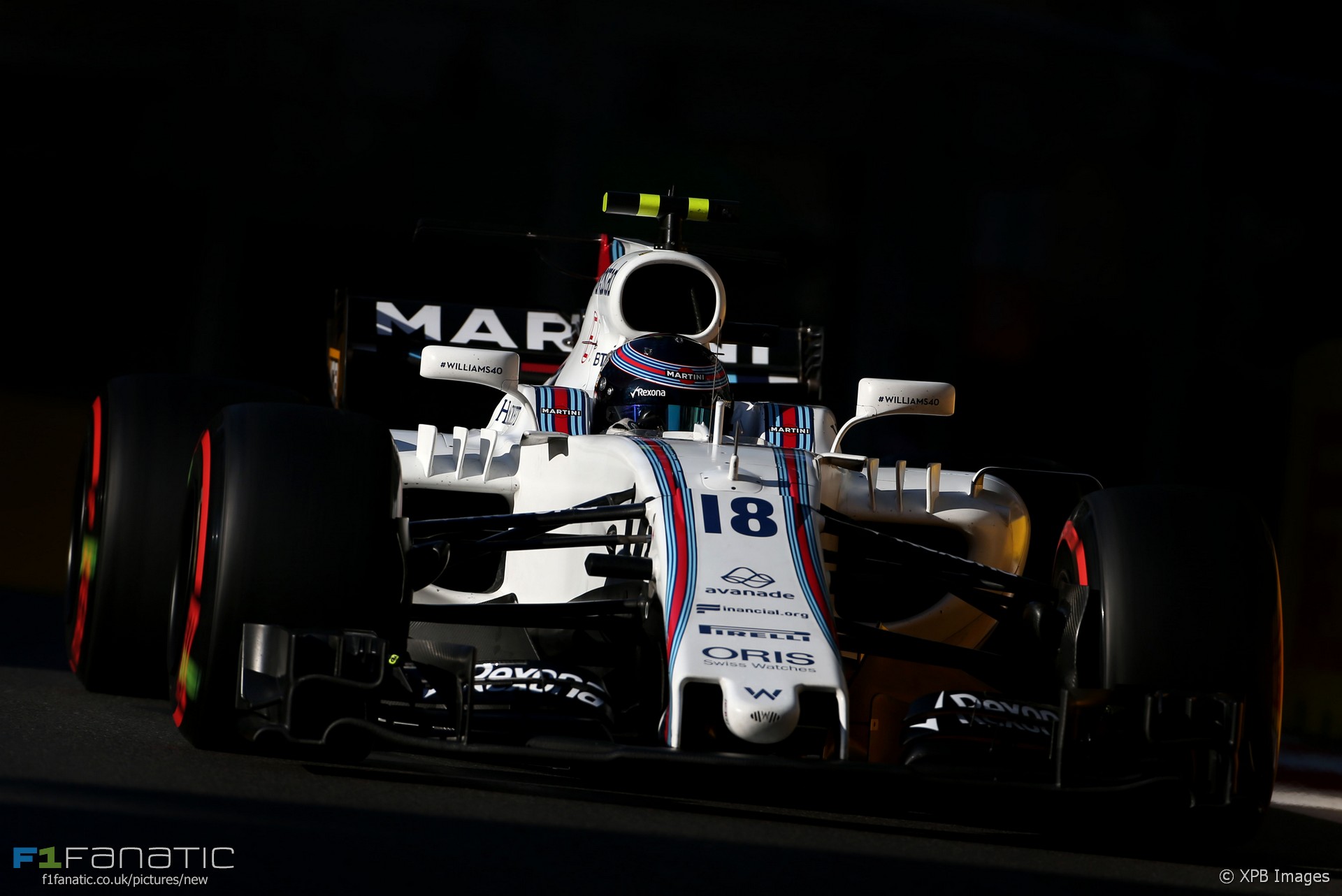 Lance Stroll out-qualified his team mate for the first time in his career but thought he’d done a “bad lap”. Here’s what the drivers had to say during qualifying and final practice.

To Verstappen: “Try to clear Wehrlein if you can, Max.”

To Ericssion: “OK Marcus, three burnout again. And be careful there is yellow flag turn two, Palmer’s car is on fire.”
To Ericsson: “Can we do a cruise? CC2 gear four and CC3 gear five, please.”

To Kvyat: “Battery three, we need one more laps with the same scenario. Battery three now.”

To Perez: “Purple mode two. One cool lap and one push lap in this run.”

Ericsson: “The worst possible position for an out-lap.”

“You can keep pushing or we can box now and sort some stuff.”
Grosjean: “Box.”
“OK, keep pushing.”

To Vettel: “Box, same issue.”
To Bottas: “Strat nine, just charge the battery. Front temperatures really good now. So let’s keep them up there and push on the next lap.”
To Verstappen: “Bottas on his soft 43.7, his first lap on super-soft after a build was also a 43.7. He is commencing a new timed lap”

Verstappen: “There’s something wrong with the engine mate. All the time when I’m going close to the engine i hear a really weird sound.”
“Alright I’ll get back you you.”

Verstappen: “Everything just switched off.”

To Hulkenberg: “Do not set a meaningful lap time.”

Fernando Alonso was frustrated at being held up by Daniel Ricciardo during qualifying. The McLaren driver later suggested his rivals couldn’t tell when he was on a quick lap because his car’s straight-line speed was so poor.

To Bottas: “We’re on the wrong delta time so just ignore it for now.”
To Ricciardo: “Make a good gap to Max. Brake balance two clicks rearwards.”

Perez: “What do you want on the cool-down lap?”
“Cool the surface. Find space to build the bulk in the final sector. Massa and Stroll ahead.”

To Ricciardo: “OK we do think that lap is safe but we’re happy to go again.”

After more frustrations during practice Romain Grosjean missed the cut for Q2. He was unhappy at losing time by being called to the weigh bridge.

“Sorry we couldn’t get through.”
Grosjean: “The scales in qualifying is not normal. We shouldn’t have stopped on the scales.”
To Ericsson: “OK Marcus box. P18 but it was a good lap.”
To Vandoorne: “OK Stoffel we’re P18. It’s a shame we caught Grosjean just before the final corner because that tow nearly worked out.”

“To Verstappen: “So to the start the lap more ten – sorry, correction – mode nine at the normal place, and reset balance.”

To Ricciardo: “OK so let’s make this lap count. It’s going to be mode nine and lift.”

To Ricciardo: “OK so keep up the pace now mate, keep pushing now.”

Red Bull were keen to keep their drivers ahead of the Mercedes when they left the pits.

To Ricciardo: “OK I imagine he’ll keep up his pace as well. Next car behind is Hamilton.”
To Bottas: “Strat one, turn seven to twelve.”

Lewis Hamilton slipped up on his first timed lap in Q3.

Ricciardo: “In the barrier.”
“OK mate understood.”
Ricciardo: “Just lost the rear, exit of six.”
“Yeah understood mate we can see you on the right-hand side.”

To Verstappen: “If you get challenged by a car behind on the out-lap, put it into mode eight.”

Bottas: “What was the gap to pole?”
“Gap was four-tenths. Looked like we lost a little bit in turn seven.”
Bottas: “Well done guys for the car.”