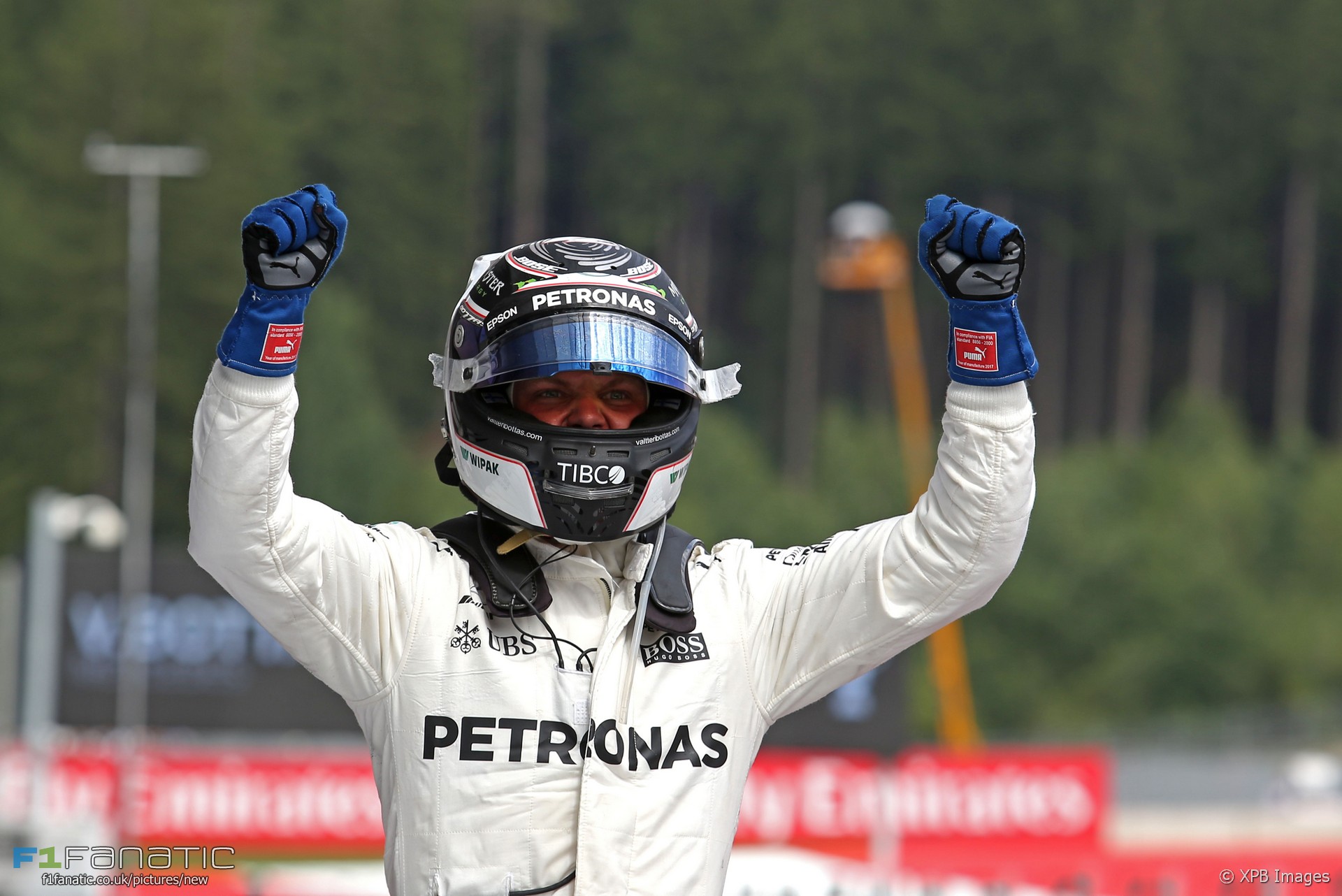 The Austrian Grand Prix was the second win of the year for Valtteri Bottas and also the second time he’s topped our Driver of the Weekend poll.

Here’s why F1 Fanatic readers voted him the top driver of the last race:

Although Lewis Hamilton had a grid penalty for an a gearbox change, Bottas out-qualified him on merit to take his second career pole position.

His start was controversial, to put it mildly. Bot Sebastian Vettel and Daniel Ricciardo, who started closest to him on the grid, accused him of anticipating the start. Bottas later admitted he had “gambled” with when to make his getaway.

He made that fast start count in the first stint, pulling out a decent lead over Vettel. The Ferrari driver came back at him in the second half of the race but, as in Russia, Bottas had enough in reserve to hold him off.

Another victory Bottas is deserving of credit for without Hamilton’s relative performance being able to be blamed on outright issues. Hamilton had a grid penalty to suffer but Bottas didn’t rest back and accept a gifted result, he beat him in qualifying. He then gave a perfect race start and managed his race inch perfectly to win against a seemingly faster Vettel.

Did Hamilton have more outright speed and was Bottas lucky the race wasn’t 1 lap longer or did he deliver a victory in the slowest time possible?

For all the bluster of Hamilton’s father about him ending careers, Bottas is delivering a very credible season up against him, and best of all he doesn’t fool around drinking his champagne from a sweaty boot, he necks it from the bottle like a real champ.
Philip (@Philipgb)

Between Bottas and Grosjean for me, voted Bottas as he got pole and held off a charging Vettel without cracking under pressure.
@Ksells

Daniel Ricciardo took his fifth consecutive podium and @Macca was especially impressed by his performance:

His weekend was faultless. Out qualified his team mate and put the car as high on the grid as was possible. Then drove an absolute stunning race to keep Hamilton behind and bring home another podium.

I don’t know how other people feel, but I think 99.9% of drivers would have been passed by Hamilton with the move he made into turn 4 on the second last lap. Outstanding piece of defensive driving.
@Macca

Bottas was quickest in qualifying to take pole, and was dominant in the race, although his tyre problems meant Vettel closed up a lot at the end.

During the race I thought that Mercedes should have brought Bottas in for his only stop as soon as all the other leading cars had pitted just to cover them, it was then stated in commentary that Vettel had reduced Bottas’s lead significantly by the time he did make his stop which I thought showed they should have brought him in earlier, but considering the state of his tyres at the end of the race it was probably better to leave him out on his first set as long as they did.

Grosjean was best of the rest behind Mercedes, Ferrari and Red Bull in both the qualifying and the race, I didn’t notice him much during the race highlights but he seemed to have a good clean race to finish sixth for Haas’s best result of the season.

I the end it was a close decision but I voted for Grosjean.
@PJA

Among the other drivers to win praise on Twitter were Kevin Magnussen and Jolyon Palmer, though many were unimpressed with Daniil Kvyat:

Got to feel for @KevinMagnussen & @HaasF1Team as reliability in quali & the race cost the team a big haul of point.. #F1 #AustrianGP #HaasF1

If we could get Daniil Kvyat out of F1 that'd be great.

Quite impressed by Jolyon Palmer today. Looked more relaxed than he has done for some time and so very close to a first point of 2017. #F1

Daniil Kvyat shouldn't be a formula 1 driver.
Over sponsored and Under skilled #F1 #F1Austria

Danny Kvyats days as a F1 driver are numbered

Geez verstappen is pretty unlucky at the moment #F1 #AustriaGP

One more lap for vettel surely would've got the win….unlucky #AustrianGP

Disappointed with Lewis today. Come back next race and stronger again. #TeamLH #AustrianGP

Vettel could have won this one, but Bottas had an incredible race. A bit disappointed by Kimi TBH. #AustrianGP

If Ferrari want to win the Constructors', they need to replace Raikkonen. He is costing the team a massive amount of points #AustrianGP #F1

Sebastian Vettel is the Brad Keselowski of F1

Don't know why @LewisHamilton pitted so early! could have gone at least 10 more laps on his tyres. Thought strategy was leave him out #F1

Kvyat needs to go back to Formula E… this is how he got demoted from Red Bull Racing, did he not learn anything? #AustrianGP #BBCF1 #SSF1

Bottas proving once again that you can stick anyone in this Merc and they'll win, Lewis Hamilton grossly overrated. #AustrianGP

How many collisions can one cause before his drivers license gets revoked? @f1 #kvyat @Max33Verstappen

Valtteri Bottas is not out of the World Drivers' Championship fight at all. Only 35 points off #AustrianGP

What's more important to me is the fact that @ScuderiaFerrari 's Vettel is STILL on top! Few more laps and he would have won. #AustrianGP

That was quite a win for BOT today. Potential implications on a variety of fronts, but shows the character & talent of the man #F1

2 comments on “Second Driver of the Weekend win for Bottas”