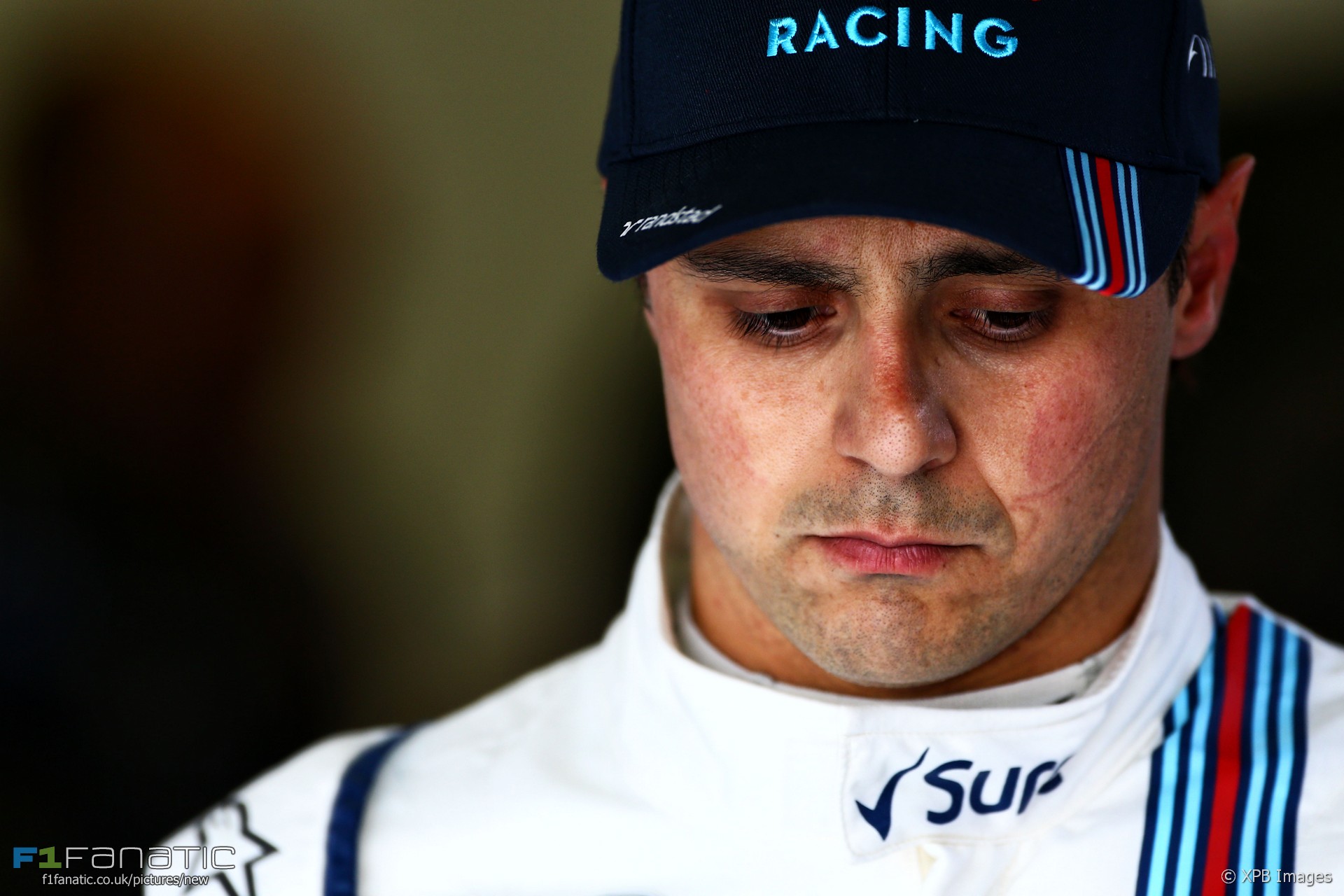 Felipe Massa’s retirement and then un-retirement last season required some delicate handling by the Williams team.

He had a poor 2016 and the timing of his retirement seemed right for the 14-year F1 veteran. Then Mercedes swooped for Valtteri Bottas.

With Williams already planning to reap the dividend of putting Lance Stroll in their second car an experienced replacement was required at short notice. Massa was the obvious choice (although they did approach Jenson Button).

Now he’s served that purpose, do Williams need to persist with Massa for another season? It may be the time to swoop for a driver who could get them closer to the sharp end, and that could have consequences for the rest of the midfield driver market.

Is the Williams FW40 quicker than it looks? Last year Massa had the worst qualifying record of any driver against his team mate, but this year he’s trouncing Stroll. Either Massa has suddenly discovered new reserves of performance within himself during the off-season or Williams are regularly qualifying beneath the car’s potential.

The team has scored 41 points so far which means that instead of battling with fellow Mercedes customers Force India, who are 60 ahead, they’re looking over their shoulder at Toro Rosso (39), Haas (29) and Renault (26). It’s a strong case for shaking up the driver pairing.

Williams is an independent team with a big engine bill to pay. That means the well-heeled Stroll, who grabbed a fortunate but no less deserved podium in Azerbaijan, is not going anywhere.

However Massa looked long in the tooth 12 months ago. The team needs a long-term replacement for Bottas, one who has experience and pace. If Mercedes want to give their junior driver Pascal Wehrlein a shot with a team capable of scoring regular points, Williams would be an ideal choice for them.

Paul di Resta’s recent run in the car may also make him a candidate. Williams could go after Carlos Sainz Jnr but it’s hard to see sufficient incentives on both sides: He may view it too much like a sideways move and Williams are likely to baulk at Red Bull’s price tag.

Sainz is in a somewhat frustrating situation at Toro Rosso. He’s demonstrated great speed and racecraft but a route up to the top team remains closed as long as Max Verstappen and Daniel Ricciardo are at the team.

Last month the team’s upper management took him to task in public for daring to say it was “unlikely” he will remain at Toro Rosso next year. Strictly speaking he was right: no one has previously spent four consecutive seasons at Red Bull’s “kindergarten”.

But nor have many previous Red Bull junior drivers continued in F1 without the team’s backing. The exceptions are Sebastian Vettel, who moved to Ferrari of his own choosing, and Vitantonio Liuzzi, who returned with the struggling HRT squad.

For Sainz, waiting it out at Red Bull has obvious downsides. He would only get a chance to move up to Red Bull if Max Verstappen or Daniel Ricciardo leave. That is only likely to happen if Red Bull fail to become championship contenders soon. And there’s no guarantee another new superstar wouldn’t come along and leapfrog him like Verstappen did.

For Sainz a move probably only makes sense if he gets interest from a manufacturer such as Renault. But they may have a different Spanish driver in mind – one who’s already won two world championships with them.

Since he returned to Toro Rosso last year Daniil Kvyat has only scored eight points to Sainz’s 77. His qualifying pace has compared favourably to Sainz so far, yet Red Bull are showing a lot of faith in a driver they kicked out of the top team early last year.

If Sainz does leave, Toro Rosso would certainly prefer to keep Kvyat to preserve some continuity. But if Sainz stays that would surely be Toro Rosso’s cue to bring last year’s GP2 champion Pierre Gasly back from Super Formula for a crack at F1.

Last month Gene Haas told the official Formula One website his team will keep Romain Grosjean for a third season and retain Kevin Magnussen too. That will give them complete continuity in their driver line-up as they begin their third year in F1.

The Ferrari customer team had previously been considered a possible destination for Ferrari junior drivers. However the Italian squad now has another possible avenue for its young charges.

Sauber’s U-turn on its decision to use Honda engines in 2018 has reopened the door for Ferrari to use the team to bring its young talent on.

Ferrari has always been more conservative than the likes of Red Bull and McLaren when it comes to this. It placed Sergio Perez at Sauber in 2012 but lost him to McLaren. Jules Bianchi, another Ferrari junior, was fortunate to get a drive with Marussia when he did – the seat was originally destined for Luiz Razia. Only two years later did Ferrari prepare his move to Sauber, at which point fate tragically intervened.

Like Bianchi, Ferrari’s latest young talent Charles Leclerc is managed by Nicolas Todt. Leclerc’s form in Formula Two this year has been exceptional for a rookie driver in a single-specification series where his rivals have up to four years’ experience with the current (previously GP2) hardware.

He’s been quickest in all seven qualifying sessions so far, usually by huge margins, but missed out on a new pole positions record in Hungary after his car failed a technical inspection. Had it not been for that misfortune in Hungary and another in Monaco his points lead would be far greater than the 50 it currently stands at.

It would be a surprise if he doesn’t wrap the title up before the season finale in Abu Dhabi – he might even do it at Monza at the beginning of next month. The timing of this could play an important role in his chance of landing one of the remaining F1 seats for 2018.

If Leclerc, the reigning GP3 champion, can win the F2 title at his first attempt and then not gain a promotion to F1, it would call into question how serious Ferrari are about their young driver programme. Particularly when in Sauber they have an obvious route for him.

However Leclerc’s rise to prominence is not good news for Antonio Giovinazzi, another Ferrari junior who made his F1 debut for Sauber earlier this year. It would be a surprise to see Ferrari put both their drivers at Sauber, especially as it would mean ejecting Marcus Ericsson, who has ties to the team’s owners.

Those crashes in China (with Sauber) and Hungary (in practice for Haas) were ill-timed for Giovinazzi. But his simulator work for Ferrari during the Hungarian Grand Prix weekend paid off hugely. It wouldn’t be a surprise to see him continue in a testing role for the team. By keeping him out of a race seat, Ferrari could also continue running Giovinazzi on the ‘young driver’ days.

But after last year’s experience, many midfield drivers may want to delay their decisions for 2018 until they’re sure no one in the top teams is going to ‘do a Rosberg’.

View the current list of 2018 F1 drivers and teams