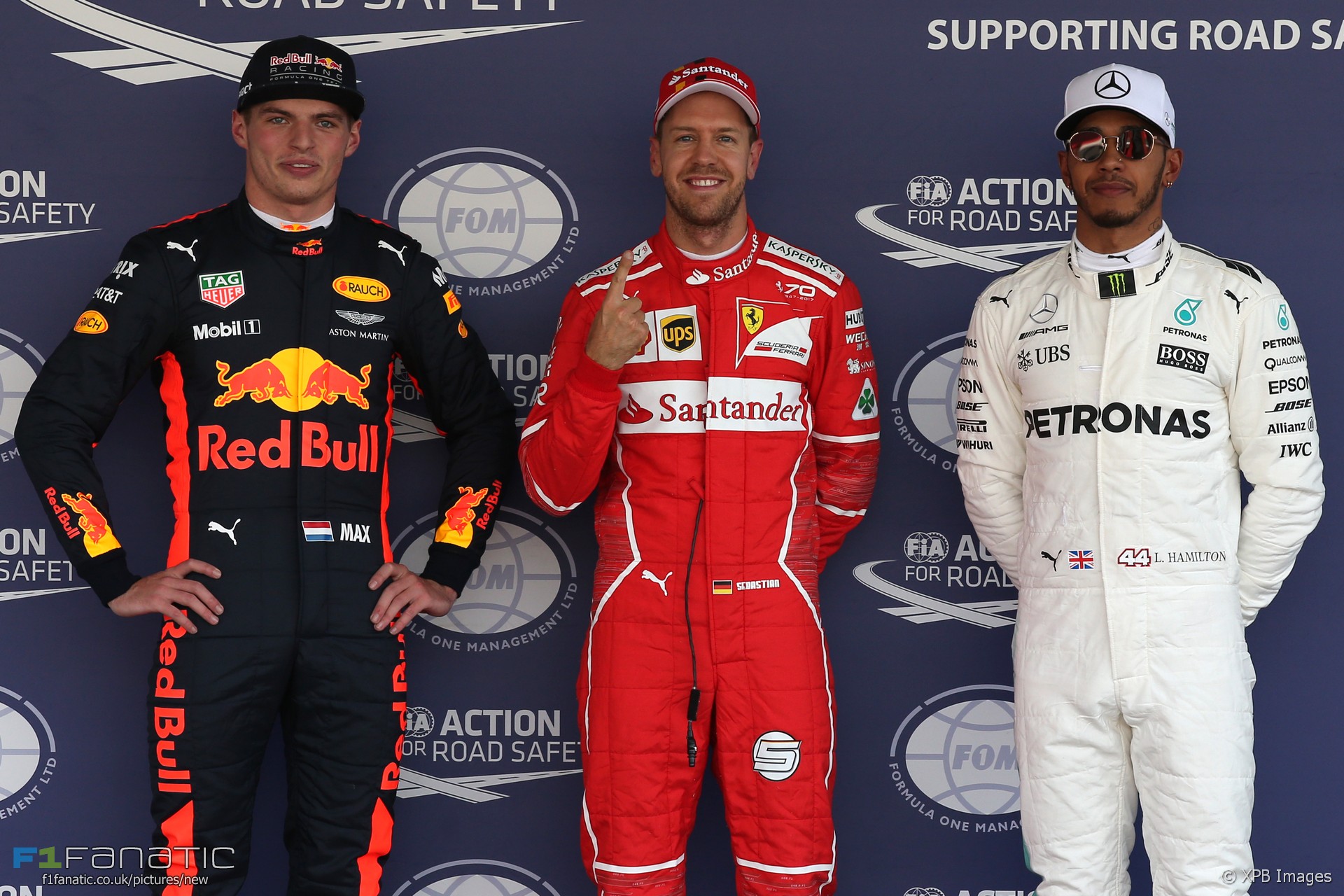 Sebastian Vettel snatched pole position in Mexico with a last gasp effort, less than half a tenth ahead of Max Verstappen with Lewis Hamilton third.

The Ferrari driver produced a stunning final lap to pip Verstappen, who had looked favourite to take the first pole of his career until the final laps.

Verstappen is under investigation by the stewards for potentially impeding Valtteri Bottas during his first flying lap.

As qualifying began, Pierre Gasly’s afternoon was already finished as his Toro Rosso was still not prepared following his early FP3 troubles. Gasly would not be able to take part in the session.

The Mercedes of Lewis Hamilton and Valtteri Bottas used the ultra soft tyres to set the early pace ahead of Max Verstappen’s Red Bull.

Fernando Alonso complained of a lack of power in his McLaren-Honda, but still managed to find enough to post the fifth-fastest time of the opening session.

With Gasly unable to set a time, the two Haas and Sauber drivers were in a battle to try and escape into Q2. Haas struggled to find pace, leaving Romain Grosjean and Kevin Magnussen rooted to the back of the grid with Marcus Ericsson and Pascal Wehrlein also knocked out with Lance Stroll the final driver to make it through.

Mercedes and Ferrari wasted no time in setting fast laps as the second session of qualifying began, with Bottas, Vettel and Hamilton all topping the times with quick laps in the low 1’17s on ultra soft tyres.

That was until Max Verstappen took to the circuit in the Red Bull and laid down the gauntlet to the championship contenders b setting a 1’16.524 – comfortably the quickest lap of the weekend so far – leaving him half a second clear at the front.

Brendon Hartley had successfully made it through into Q2, but his afternoon ended on his first timed lap when he became the second Toro Rosso driver to suffer an apparent engine problem during the day.

Hartley, unlike team mate Gasly, would not find himself at the bottom of the session as neither of the McLaren drivers attempted a single lap due to their impending grid penalties.

The final battle for the remaining Q3 slots came down to a fight between Force India and Williams, with Felipe Massa and Lance Stroll ultimately missing out on a top ten berth after local hero Sergio Perez secured the final spot in tenth.

Pole position seemed very much up for grabs as the crucial final qualifying session began in Mexico.

Valtteri Bottas’s first effort was compromised as he locked up under braking for the stadium section after passing Verstappen’s Red Bull, who had backed off from his first timed lap. The stewards announced that they would investigate the incident after the session.

Lewis Hamilton produced a 1’16.934 on his first attempt, but was immediately beaten by Vettel who was almost a tenth quicker.

Then it was Verstappen’s turn and the Red Bull driver duly delivered by producing a 1’16.574 to take provisional pole position.

Hamilton ran wide at Turn 12 on his second attempt and did not improve, leaving the door open for Verstappen and Vettel to capitalise.

Vettel produced a stunning final lap to snatch provisional pole by just under a tenth from Verstappen, who was unable to improve on his final effort, securing Vettel his fourth pole position of the season.

Bottas will line up fourth, ahead of Kimi Raikkonen and Esteban Ocon. Daniel Ricciardo will start seventh, with Nico Hulkenberg, Carlos Sainz and Sergio Perez rounding out the top ten.

122 comments on “Vettel snatches pole from Verstappen in Mexico”