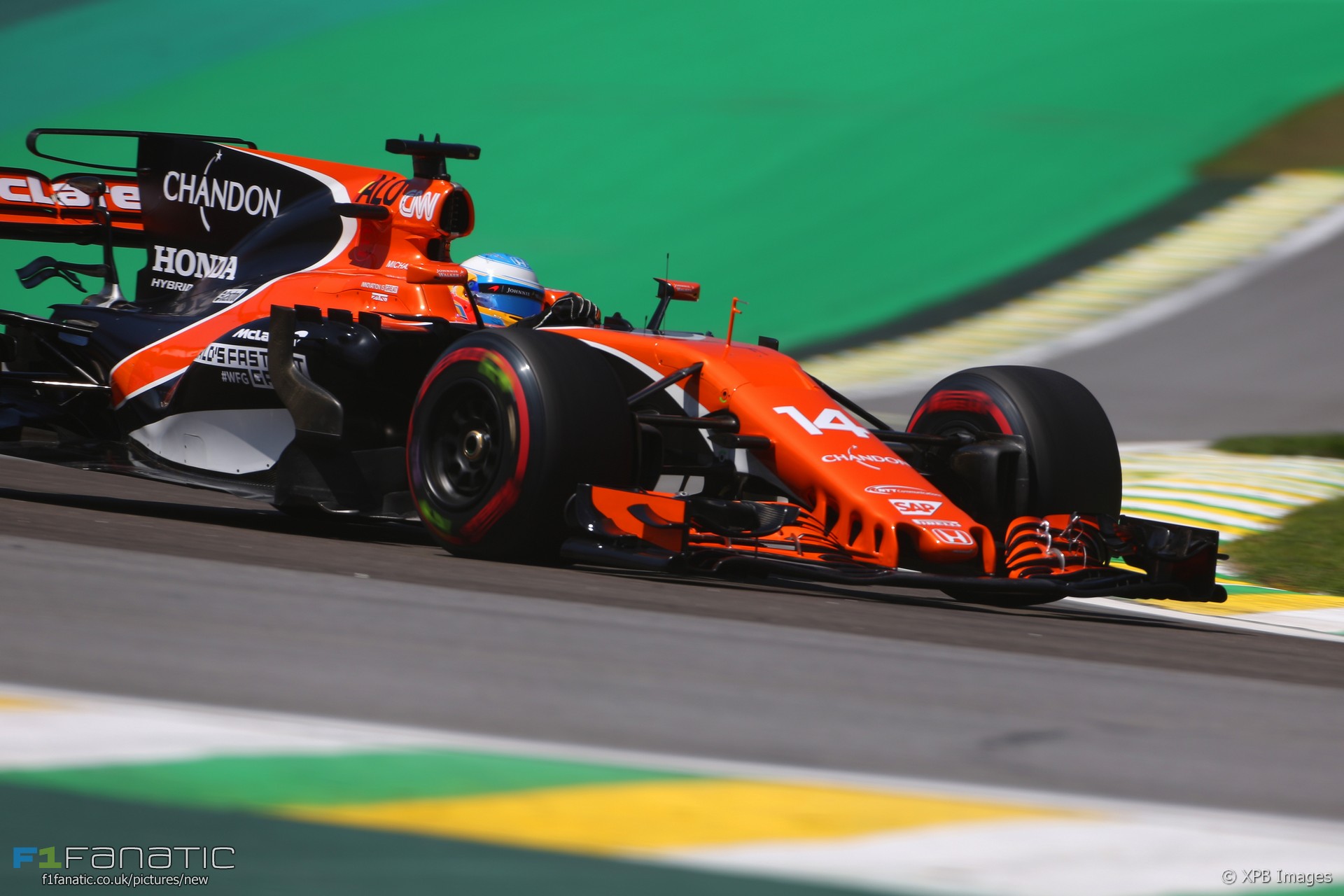 There were more power unit frustrations for Fernando Alonso during practice in Brazil.

Here’s the highlights of what he and the others had to say on the radio.

Daniel Ricciardo was sat at the pit lane exit for three minutes before practice began and kept his team entertained.

Ricciardo: “Does that give you all the pit lane radio checks you need?”
“You could always give us ‘knock, knock, knocking on Renault’s door’.”

To Gasly: “Possible oil on the inside line. Stay on the outside, Brendon stopped the car on the left.”

“Box Brendon. Scenario nine. Easy in”
Hartley: “Copy. I have big smoke.”
“OK stop in a safe place. Stop the car now. P1 and roll into the pit entry.”
Hartley: “I stopped.”
“OK. Sorry about that Brendon.”

Newcomer Geroge Russell had his first run for Force India.

Russell: “Just got a bit of traffic ahead. Trying to get a bit of space.”
“Behind Alonso track is clear.”

“Is the car OK?”
Vettel: “Yeah all OK. I think I just pushed too hard in eight and lost the rear in nine.”

Massa: “Had front locking in corner one so I’ll try next lap.”

“Magnussen: “The rear’s not very good.”

Ricciardo: “Had a bit of a knock out of turn ten.”
“Understood, we’ll look into it.”

To Alonso: “Fernando we’d like to try the toy test.”

To Hamilton: “Places to improve: Turn eight and nine. You were too deep into eight.”

“OK so we are expecting a clip now.”
Ricciardo: “So I go reverse early then?”
“Yeah reverse on.”

Nico Hulkenberg overtook Hamilton at Juncao and forced the Mercedes wide at the exit.

Hamilton: “That was very dangerous of Hulkenberg.”
“OK, copy.”

To Hamilton: “Doesn’t look like many people are improving on this tyre.”

Vandoorne: “Why is drive-ability so bad?”
“Was it the whole lap? Anywhere specific Honda should use?”
Vandoorne: “Whole lap. Turn one is a good example.”

“Russell: “I feel like my brake balance keeps moving without me touching it.”

“Keep pushing.”
Leclerc: “I couldn’t keep pushing, Ocon is on a race sim in front of me and there was no pace.”

Raikkonen reported a problem on his car at the beginning of the second session.

Raikkonen: “OK I’ve got a lot of vibration at the front.”
“OK Kimi, understood.”

Raikkonen: “Again I have the vibration on the front brakes, it’s a lot of vibration.”

Grosjean: “OK that’s interesting I picked up a lot of front locking on that lap for some reason.”
“Wehrlein coming.”

Stroll was clearly dissatisfied with his session.

Stroll: “Ah I got traffic at the same point. I have a flat-spot now.”

“You’re gaining turn eight but losing the time at turn nine. There may be a better compromise there.”
Hamilton: “Yeah the last time I just went a bit deep.”

Stroll: “I have no rear stability and I have a Ferrari in front of me. Alright I’m going again, screw this, I don’t want to waste my time behind the Ferrari.”
“Lance try to increase the lift-and-coast and I think as well…”
Stroll: “It’s not the solution. I will but you’ll see it’s not the solution.”

To Vandoorne: “Stoffel a few drops of rain reported on the pit wall.”

Alonso: “The deployment is stupid. We have the same problem, maybe.”
“Understood, Fernando, we’ll just keep this for now, it’s a good test.”