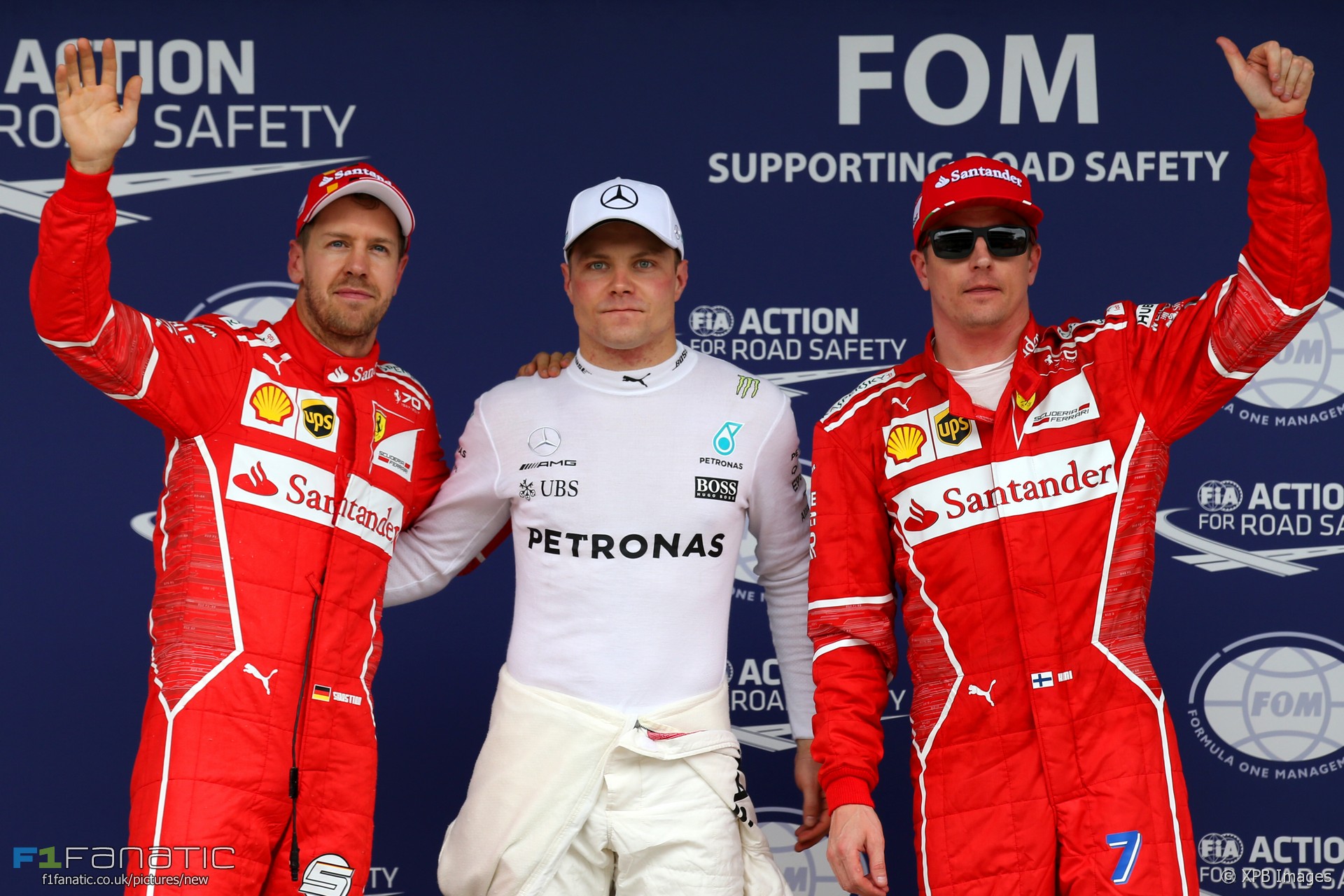 Valtteri Bottas took pole position for the third time this year after his Mercedes team mate crashed out in Q1 at Interlagos.

The session was just a few minutes old when Lewis Hamilton hit the barriers at Ferradura, ending his participation in qualifying.

Ferrari were a serious threat for pole position and Sebastian Vettel led their charge in Q3. But a last-gasp effort by Bottas put him on top by less than four-hundredths of a second.

The first surprise of qualifying came within minutes of Q1 starting. Hamilton was halfway around his first flying lap when his Mercedes snapped sideways in the middle of Ferradura, sending him into the barriers.

Qualifying was stopped while the damaged W08 was recovered. Hamilton took no further part in proceedings and will start the penultimate race of the year from the back of the grid.

The delay was good news for Lance Stroll whose Williams needed a new gearbox and power unit parts following his stoppage in final practice. His mechanics had a few precious extra minutes to complete the work, giving him enough time to set a lap. However he couldn’t make the cut for Q2, falling short by little more than a tenth of a second in the closely-fought session. Team mate Felipe Massa comfortably made it into the next stage.

Pascal Wehrlein was especially disappointed to miss the cut by just a few hundredths of a second. Brendon Hartley, who was off his team mate’s pace to begin with, found enough with his last run to reach Q2.

The rain which had been forecast for the first two days of the weekend continued to stay away as the second phase of qualifying began. The front runners chose super-soft tyres for their Q2 runs, which they will start the race on tomorrow, with one exception. Daniel Ricciardo, who has a ten-place grid penalty due to a power unit change, ran soft tyres and will use them at the start of tomorrow’s race.

Vettel served notice of Ferrari’s potential by heading Q2 with a new track record lap of 1’08.494. Bottas was in close contention and Max Verstappen edged Kimi Raikkonen for third.

But the real fight was among the midfielders for a place in Q3. Almost every lap at the end of the session saw a new name join the top ten and another rival slip into the drop zone.

Esteban Ocon seemed to have grabbed himself a place in Q3 with an early run, but Sergio Perez beat it in the other Force India. The two Renault drivers matched his time to within a tenth of a second, and that sealed Ocon’s demise. He missed the cut by six-hundredths of a second and Romain Grosjean’s Haas was only four-hundredths behind him.

With an power unit change penalty looming Hartley used Q2 to practice pit stops and standing starts. Kevin Magnussen and Stoffel Vandoorne joined him on the sidelines after the second part of qualifying.

Was Vettel going to secure a second consecutive pole position for Ferrari? It looked likely after his first lap in Q3, which edged Bottas for the top time. And matters appeared to be playing into his hands when drops of rain fell before the drivers began their final runs.

The two Ferraris began their final runs before Bottas. Vettel was slightly cautious at the first corner and paid for it a minute later when he crossed the line and failed to improve. Raikkonen, who’d been quickest in the first sector, also failed to better his position.

Now it was down to Bottas. The sole remaining Mercedes was even quicker through the first sector and carried that advantage through to the end of the lap, nicking pole from Vettel by less than four-hundredths of a second.

Verstappen took fourth, comfortably quicker than Ricciardo, while Perez claimed sixth position by less than two-hundredths of a second over Alonso. The Renault pair came next followed by Massa, who earned a top ten start for his final home race.

51 comments on “Bottas snatches pole from Vettel after Hamilton crashes”