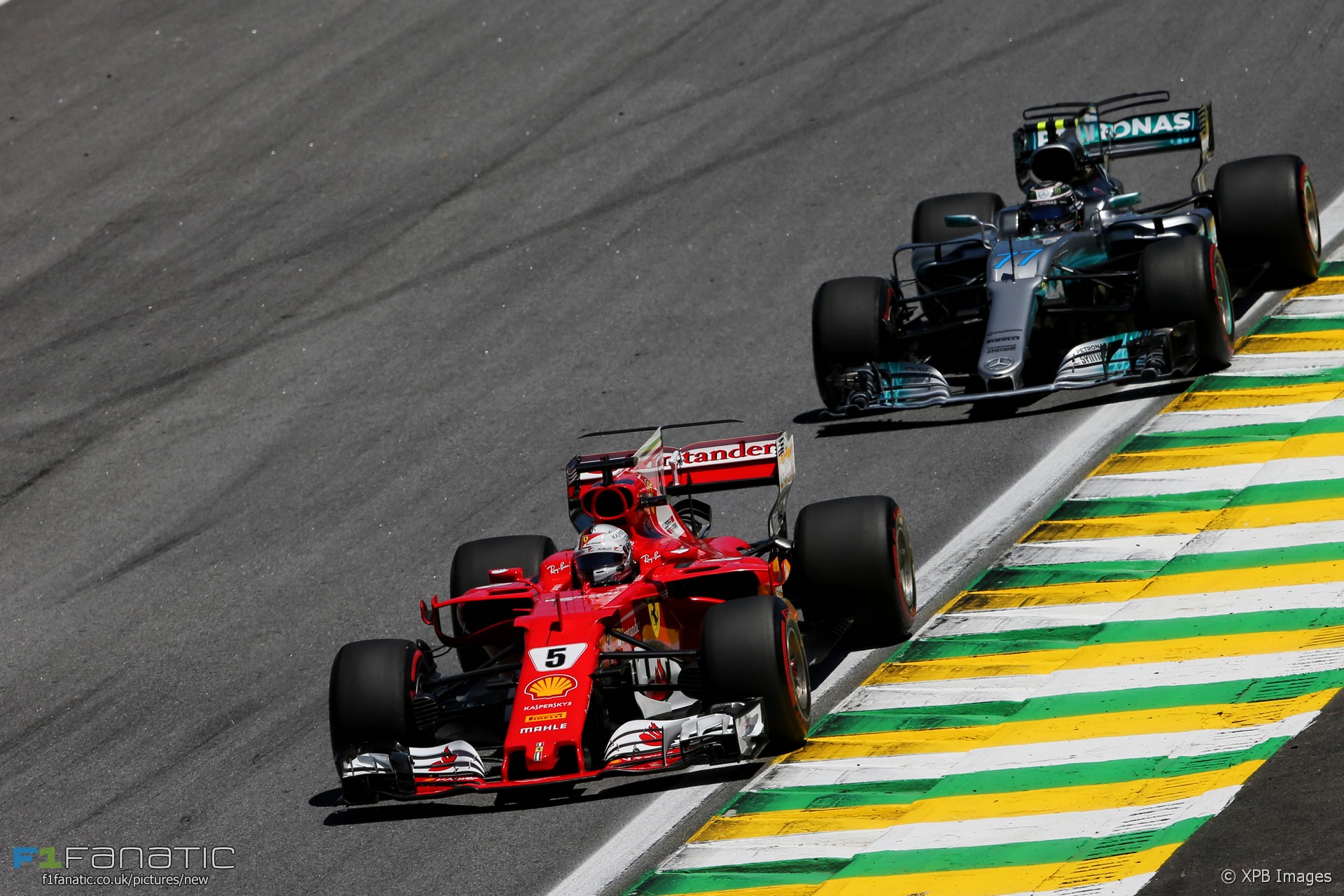 Mercedes haven’t won four consecutive championships by giving victories away. But this, their seventh defeat of 2017, was undoubtedly a win which got away from them.

Even in the scorching heat of Interlagos, where track temperatures hit 60C at the start of the race, the W08 was quick enough to win. But errors by both its drivers let Sebastian Vettel in to claim his first victory since the summer break.

Lewis Hamilton had taken himself out of realistic contention for victory by crashing in qualifying. But there were times in the race when the new world champion looked capable of fighting for the top spot despite his pit lane start.

Meanwhile team mate Valtteri Bottas lost his advantage from pole position within moments of the start.

The last time Bottas started from pole position, in Austria, Vettel was also alongside him. And the Ferrari driver was stunned by how quickly the Mercedes driver reacted to the start.

This time the two cars pulled away as if they were connected to each other. But as the acceleration kicked in the Ferrari began to gain ground, Bottas not finding as good traction.

Vettel might have been discouraged from trying a move had Bottas been as aggressive as, say, Vettel was in Singapore. But Bottas was more conservative and Vettel claimed space for himself on the inside of turn one, securing the lead of the race. That proved pivotal. As they accelerated out of turn two Bottas again didn’t quite have the grip to stay with the Ferrari.

“I think we lost the race in the first corner,” Bottas admitted afterwards. “When I dropped the clutch at the start initially, there was less grip than I expected, so I broke the traction and got some wheelspin.”

Within a few moments Bottas had to call off his pursuit of Vettel. Two separate accidents had left three cars stranded on the side of the track.

At turn two Kevin Magnussen had squeezed Stoffel Vandoorne into Daniel Ricciardo. The Red Bull driver spun around but it was the other two who sustained race-ending damage. All three were cleared of responsibility.

At the same moment the Safety Car was deployed Esteban Ocon and Romain Grosjean were disputing the apex of Ferradura. The Haas driver had the inside line but skidded wide – the result, he later claimed, of a tyre deflating due to contact at the first corner. He took the Force India off with him and left Ocon with a puncture which prevented him from returning to the pits, ending his career-long streak of race finishes. Grosjean continued but was given a ten-second penalty.

Hamilton flies through the field

The field trundled through the pits while the turn two debris was cleared away. Ricciardo and the Sauber pair took the opportunity to fit fresh tyres while Hamilton counted his blessings: Not only was he up to 14th place already but the Safety Car had slashed his deficit to the leading cars. When the race restarted on lap five he was just 4.7 seconds – and 13 cars – behind Vettel.

Bottas was unable to do anything about Vettel at the restart. However the Ferrari driver didn’t have the pace to pull much more than two-and-a-half seconds clear of the Williams.

Meanwhile Hamilton was making rapid gains through the field. He passed Brendon Hartley, Lance Stroll, Marcus Ericsson, Pierre Gasly, Carlos Sainz Jnr and Nico Hulkenberg with ease. Sergio Perez put up token resistance, but Hamilton was never going to face any realistic opposition until he caught the much quicker cars.

Behind him Ricciardo, who had fallen to last behind the Safety Car, made similarly rapid progress. Both drivers were running the soft tyre for this stint – Ricciardo having fitted new ones at the end of lap one – so they would inevitably have to stay out later than those who had started the race on the super-softs.

On lap 22 Hamilton hit free air and reeled off a 1’13.485 – the fastest lap of the race so far. From lap 24 he was consistently the quickest driver on the track until the front runners made their pit stops. Perhaps he had a chance?

Bottas was the first of those at the front to pit, heading in for a new set of softs on lap 28. From entry to exit he had the fourth-quickest pit stop of the race, and having been so close to Vettel before he came in Ferrari had to react.

They did, beautifully. Vettel later admitted he hadn’t stopped on his marks well on recent visits to the pits but this time he nailed it. It wasn’t the quickest pit stop but he gained three-tenths on Bottas, and those proved critical as he rounded the inside of turn three and merged back on-track just in front of his rival.

Vettel had contained Bottas, but what about Hamilton, who was still yet to stop and now led by three-and-a-half seconds? Vettel bided his time: Bottas was not pressing him hard from behind and Hamilton was only losing a tenth here and there to his pursuers.

For Hamilton and Ricciardo, Mercedes and Red Bull alike were wary of fitting the super-softs too soon. The pair came in together on lap 43 for their sole stop and both set their fastest laps of the race soon after resuming. But Hamilton, unlike Ricciardo, was able to keep running at or near his peak pace, slicing well over a second a lap out of the cars in front of him.

He caught and passed Verstappen with dismaying ease: Not because the Red Bull driver didn’t put up a fight, but because the combined might of Mercedes’ power unit and the advantage of DRS made it futile. Soon afterwards Verstappen lobbied Red Bull to let him put super-softs back on so he could have some fun. He did, breaking the lap record, while Hamilton pressed on in pursuit of Raikkonen.

This finally proved too great a match for Hamilton. By the time he was on the Ferrari’s tail Hamilton’s tyres were 22 laps old. A lock-up at turn one signalled their useful life was nearly over, and he had to settle for the last place off the podium. Had he breezed past Raikkonen then, assuming Bottas would have stood aside, he might have got within DRS range of Vettel on the final lap, but this never looked like a realistic scenario.

A more fraught battle was being contested over seventh place. Felipe Massa had breezed past Alonso at the restart, Honda power no match for Mercedes, then kept him behind for the rest of the race.

Alonso knew that getting close enough to Massa to use DRS was the best chance he had to stay in front of the fast-closing Sergio Perez, who he’d elbowed aside on lap one. Alonso was hugely quicker than the Williams in the corners but couldn’t hang on down the straights, so the trio crossed the finishing line covered by seven-tenths of a second.

“Being the last lap of Felipe’s last-ever F1 race in Brazil, I wasn’t sure how hard he would defend,” Alonso admitted later. “I think one more lap and I could probably have got both of them,” reckoned Perez.

Nico Hulkenberg collected the final point ahead of Sainz, both Renaults a lap in arrears. Gasly was the only Toro Rosso driver running at the finish in 12th after Hartley suffered yet more power unit-related woes. “We knew that there was a problem early on in the race, as I had to start transferring oil,” he said. “I didn’t want to ask, but I had the feeling that we were not going to get to the end and we didn’t.”

Pascal Wehrlein did his best to complete virtually the entire race on one set of softs after his first lap pit stop, but fell behind his team mate with three laps to go. The luckless Stroll dropped to last after a tyre delamination.

Vettel back on top

Vettel’s fifth victory of the year brought some cheer to Ferrari who had seen their championship hopes shattered in the races since the summer break. No driver has beaten a Mercedes rival in the championship since the V6 hybrid turbo era began but Vettel is likely to become the first unless Bottas has a lucky weekend in Abu Dhabi.

Although the cards fell favourably for Hamilton in the race, Bottas will surely be dismayed at seeing his team mate finish just 2.7 seconds behind him after starting from the pit lane. Between them both Mercedes drivers squandered chances to win this grand prix, but Hamilton certainly delivered on race day.