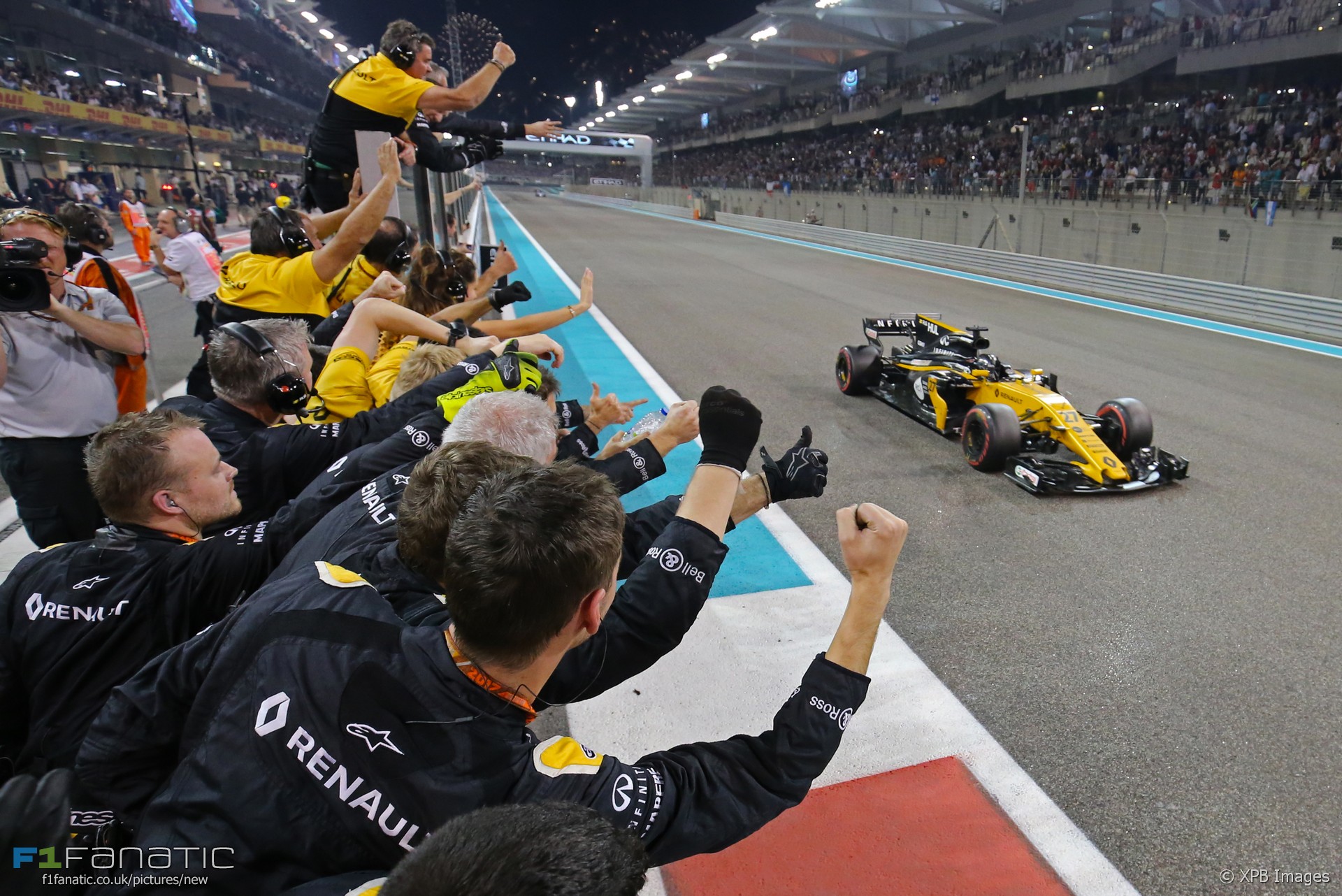 Whether or not Lewis Hamilton was giving his all, Bottas had him covered this weekend. He outdid his team mate through the final sector of the lap in qualifying, securing a vital pole position.

In the race there was no repeat of his indifferent start from Brazil and from there on he soaked up the pressure from behind. A small slip at turn five was the only time he allowed Hamilton to get close, and again he could rely on his superior pace in the final sector to draw clear. That, and the near-impossibility of overtaking at Yas Marina. Not a great win but certainly a deserved one.

Hulkenberg emerged on top of a closely-fought midfield battle. He laid the groundwork in qualifying by beating the two Force Indias for seventh on the grid.

He held that advantage with a move which was may have been cynical but was certainly effective. Did Hulkenberg bet on getting the standard five-second penalty for cutting a corner to keep Sergio Perez behind and choose to stay ahead of the Force India knowing it was his best chance of keeping the position? If so he knows the rule book and recent precedent well, though it’s no surprise Force India were not impressed.

Although he should have joined his team mate in Q3, Grosjean had cause to feel proud of his race. He locked horns with Lance Stroll in the race, Grosjean finally getting the better of the Williams in their fight for 13th.

That allowed the Haas driver to put some distance between himself at the lower half of the midfield. He surprised Hulkenberg with a great pass into turn one, though it was inevitably reversed in the DRS zone. However he ran out of time to catch the fight for ninth and tenth between Felipe Massa and Fernando Alonso.

Not a particularly spectacular weekend, though he ended the race with an emphatic margin over his team mate. Third was the best on offer for Ferrari on Saturday and Sunday, and Vettel delivered it.

Even making generous allowances for the fact he was running an older-specification power unit, this was a dreadful weekend for Stroll. He was more than a second off Massa’s pace in qualifying and while he can usually rely on having better race pace, it simply wasn’t there on Sunday.

Having been passed by Grosjean, Stroll demanded an early pit stop, saying he would run to the end on the same tyres if he had to. As it turned out he made two more pit stops and was treating the race as a test session by the time it was over.

Although he finished ahead of his team mate, Hartley had the tougher time of the two on balance. Notably in qualifying, where he struggled to produce a clean lap in Q1 and Pierre Gasly beat him by seven tenths of a second.

He was closer to the pace in the race but was behind his team mate until the latter had a brief spin. Both then ended the race in the queue behind Stoffel Vandoorne.

Hamilton had what we are now coming to recognise as his standard post-championship slump, though he was still good enough for second. Daniel Ricciardo deserved fourth place after a good run in qualifying but was scuppered by hydraulic problems. He and Vettel put their team mates in the shade.

There was little to choose between the Force India drivers, though Esteban Ocon had the potential to out-qualify Sergio Perez. Massa did a decent job in his final race but lost a place to Fernando Alonso after his pit stop.

Vandoorne picked up damage early on in the other McLaren yet kept a string of quicker cars behind. They included Kevin Magnussen, who’s spun off at the start, and Pascal Wehrlein, who was clearly the quicker of the Sauber pair.