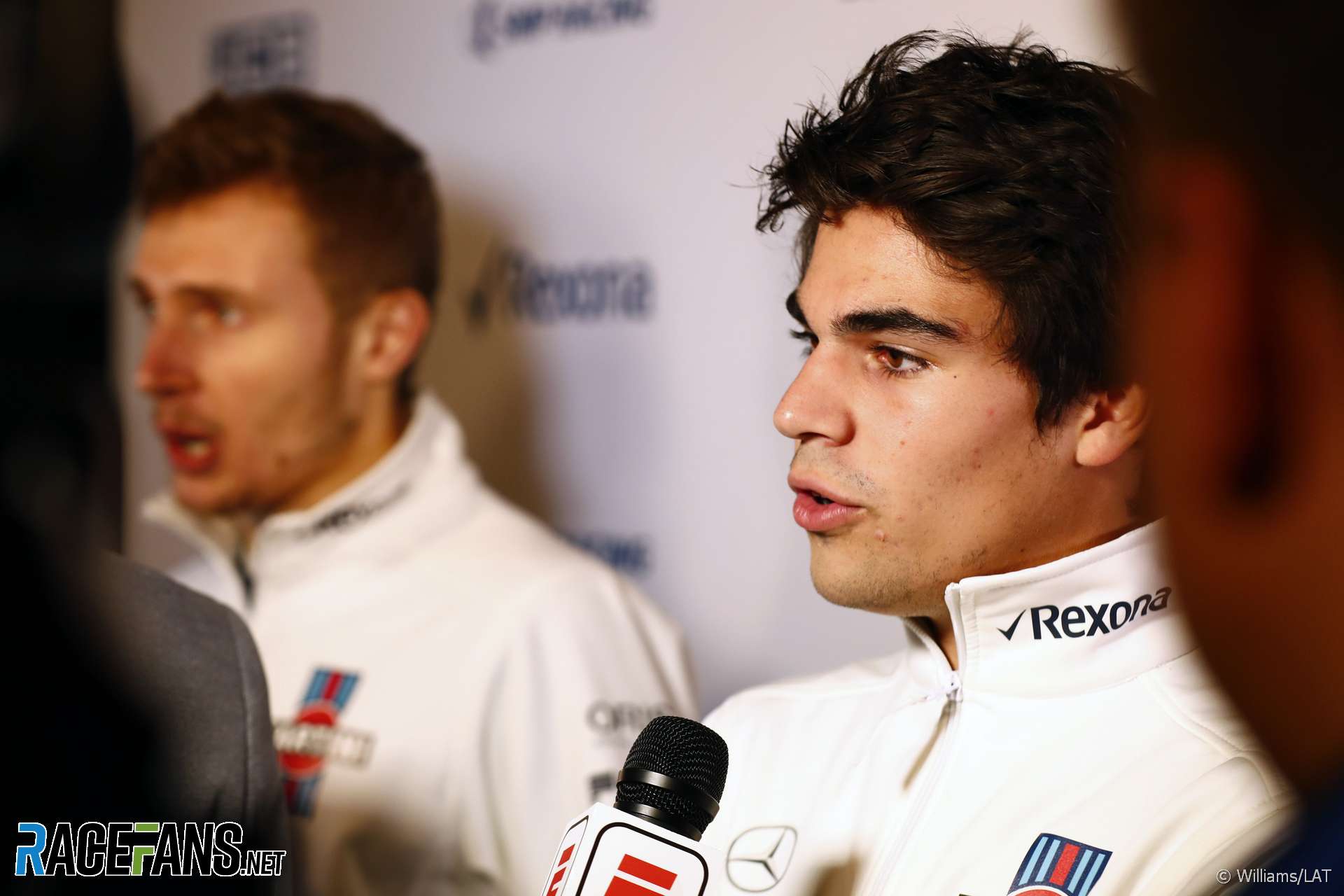 The uncharitable would have called Williams’s ‘2018 F1 season launch’ yesterday evening it a car launch without the car.

On the other hand, take a glance at the F1 launch calendar for 2018 and note that just one of the remaining teams – world champions Mercedes – have planed an actual pre-season event. A saying about ‘gift horses’ therefore springs to mind.

The FW41 was present in the form of a rendered image projected onto a wall, but with no physical car to talk about the drivers were the main focus of the media’s questions. Last year the team added one rookie to its line-up in the shape of Lance Stroll and 12 months on he has been joined by another newcomer, Sergey Sirotkin.

This is a significant change for the team. Just two years ago Williams began the season with two drivers who between them had started over 300 races. This year the corresponding figure is just 20 (the second lowest-on the grid after Red Bull’s kindergarten Toro Rosso, where Pierre Gasly and Brendon Hartley have nine starts to their names).

Last year Williams faced accusations it had hurried Stroll into F1 because of the wealth which followed him, charges the team addressed head-on. Yesterday’s launch event saw a continuation of the theme as Claire Williams and Paddy Lowe heaped praise on Stroll’s rookie season and strong rebuffed suggestions they had hired another ‘pay driver’.

“You may have seen over the winter, it’s not talked about so much, but Lance gained the most positions in lap one in aggregate in 2017 season amongst all the drivers in the grid,” Lowe pointed out.

“Now that is not a common statistic to quote,” he continued, “but actually of the top three, four attributes of a great race driver that would be one of them.”

“Because what you want to do is take those positions in the first lap, be aggressive, but not throw it away by hitting someone. Lance is very strong in that area and I think he can only build through this second season, come back stronger and gain even more points from the car.”

You can’t fault the accuracy of this statistic: On average Stroll gained two places on the first lap of every race last year which was the most of any driver. But it’s also relevant to reflect why it came about.

On average Stroll qualified seven-tenths of a second slower than team mate Felipe Massa. He therefore had many more places to make up at the start.

Stroll’s under-performance in qualifying would have been less alarming had there been clear signs of progress over the course of the season. But in the final five races Stroll was a second slower on four occasions.

It’s hard to argue there aren’t more promising junior talents on the market which do not have the backing of Stroll and Sirotkin. But equally those who claim Williams are putting income before performance are missing the point.

As the breakdown of team budgets published by RaceFans on Wednesday showed, the income gap between the biggest and smallest teams is huge. Williams, despite being one of F1’s heritage teams, is very much one of the smaller outfits.

Once a team of Williams’s size has paid for the basic costs of building the car and travelling to all the races, any additional income it can secure makes a huge difference to its potential for development. Which, if successful, translates directly into a lap time gain.

It’s a dilemma which will be familiar to players of Motorsport Manager. Should you plough your resources into developing your car or use it to subsidise the best possible driver line-up? Will you be more competitive with a solid car and great drivers or a great car and capable drivers?

“We don’t take these decisions lightly,” Claire Williams stressed. “If we had any doubt over our driver line-up then we certainly wouldn’t be putting a race driver in a car. As a team everyone knows that winning for Williams it’s all about the constructors’ championship.”

When Williams became a Mercedes engine customer in 2014 with Massa and Valtteri Bottas driving it finished third in the championship. But its points hauls over the past four seasons vividly illustrates a decline which could not be ignored: 320, 257, 138, 83.

Williams is gambling that the performance it may lose through its driver line-up (never ignoring the potential for improvement) can be more than made up by the progress it makes on its chassis. Let’s see if it pays off.