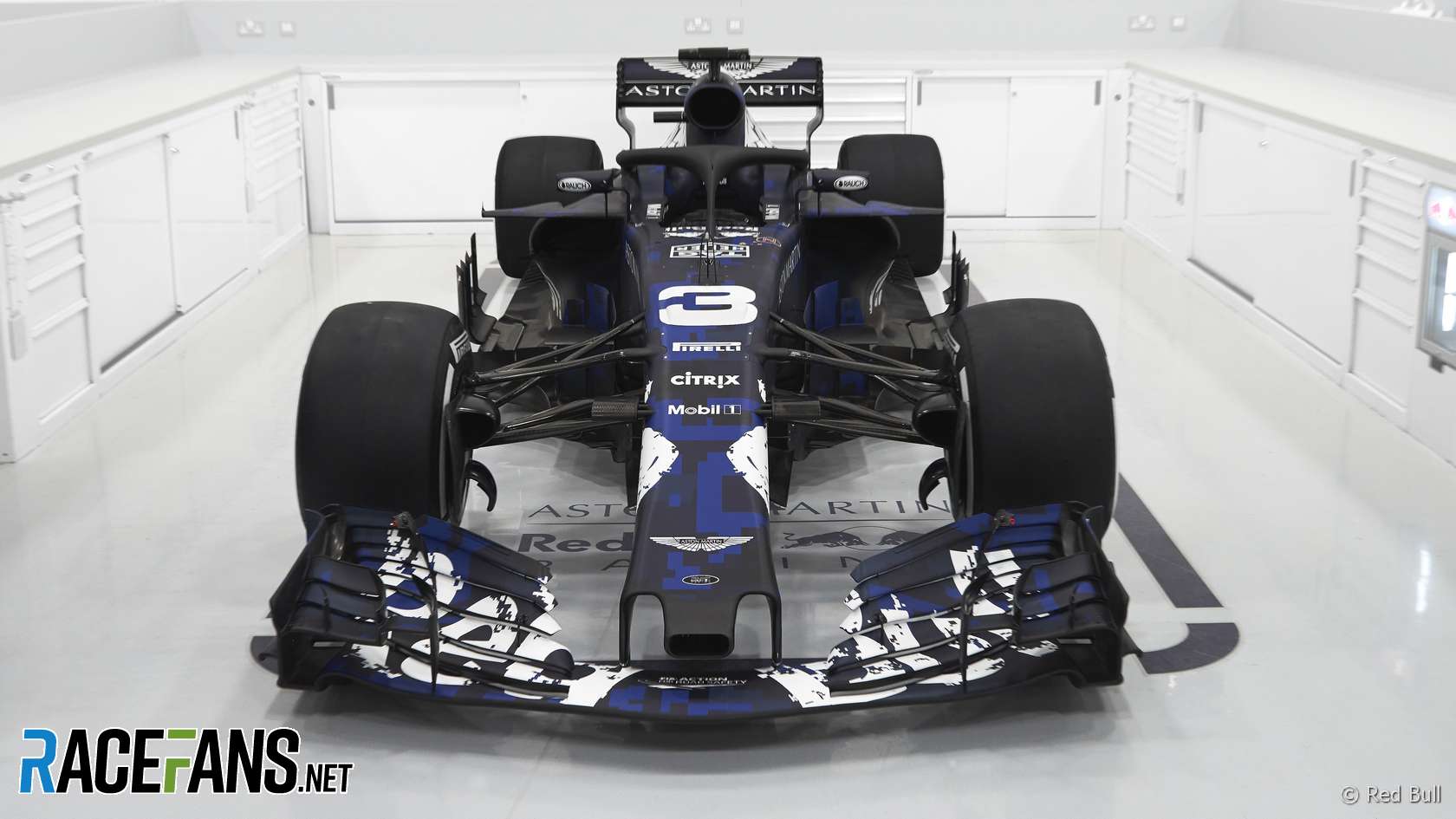 Red Bull has traditionally left it late to launch its new car, and then only shown as little of it as possible. But the team made a disappointing start to the new season 12 months ago and decided to shake things up by ‘disrupting’ its usual arrangements.

The RB14 broke cover on Monday and the team not only showed off more of the car than usual, but also sent it for a test run around Silverstone. However they were still keen to keep some of its design secrets hidden.

The RB14 that trundled round a wet Silverstone on Monday certainly looks the part in its one-off test livery. Under its fresh skin the early signs are promising for a team which needs to hit the ground running this time.

As per most car launches, Red Bull have kept their powder dry by retaining the front wing and nose configuration from the end of last year. The retention of the S-duct shows that this feature will more than likely be part of any further updates.

Things begin to get more interesting around the front suspension. The suspension has long been constrained by aerodynamics, so there is little scope to produce anything too innovative given the minimal space given to the designers.

Indeed Red Bull was one of the first to bring back pullrod rear suspension for this reason. The general concept of controlling the car under load is well understood and although we have seen many new tricks over recent years, these have all been orientated around aerodynamic gains.

Mercedes and Toro Rosso pushed the boat out further last year with a horned king pin arrangement for the upper wishbone, allowing them to lie the A-arm horizontally and also raise the lower wishbone below – this was done to clear the arms from the front wing’s wake and open up a clearer path for air to travel over the bargeboards. Red Bull have not copied this directly on the RB14 but have had a similar train of thought. The inboard mounts, for the upper wishbone in particular, are brought forward and jut out from the chassis, manipulating the airflow in a tidier manner as it journeys along the side of the tub.

At its midriff the RB14 carries forward ideas from 2017 with a bit more aggression. Like the other cars we have seen so far Red Bull have adopted the low slung impact spar to form the lower leading edge of the sidepod inlet and with it an aggressive undercut. The spar extends out to support the revised deflector wings, although curiously this was edited out in one particular photo:

Is this a sensitive detail in itself, or is Red Bull attempting to deflect attention elsewhere on the car?

The inlet itself lies further back and sits perpendicularly to the oncoming flow – a large horizontal vane hoods the opening, circumnavigating the angled inlet regulation.

The size and profile of the sidepods themselves are a thing of beauty and are certainly of Red Bull blood: small, leaning inwards and hugging the car centreline. It will be very interesting to see how the radiators have been packaged within.

Up above the airbox has been redesigned to deal with the wake coming off the Halo, while the engine cover features split lines along its spine which suggest that there are different options to be tried over the testing period.

The back of the car appears largely unchanged so far: the rear brake ducts are of interest but the key features are yet to receive development.