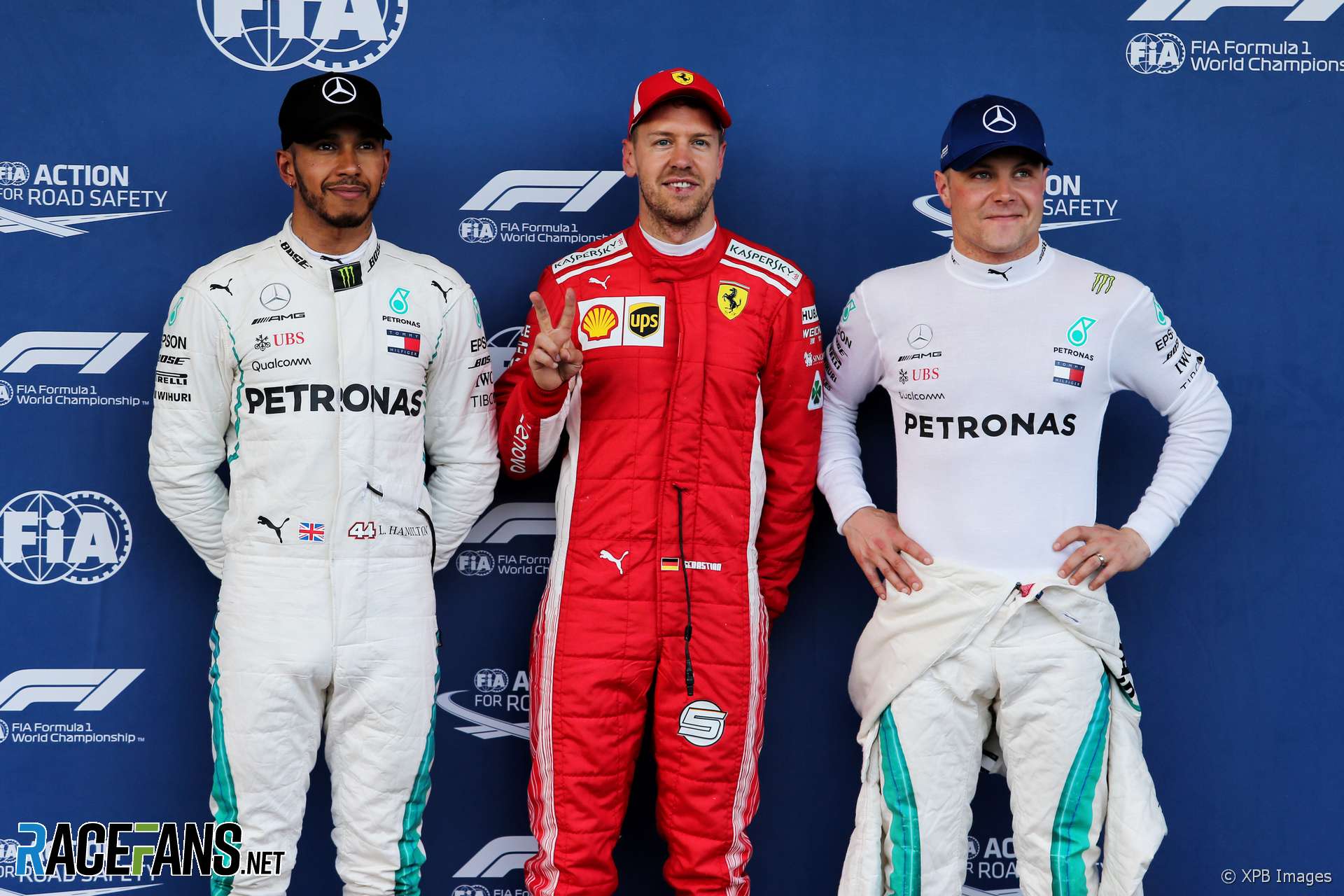 Sebastian Vettel took pole position for the third race in a row after team mate Kimi Raikkonen missed out on a chance to beat him again in Q3.

Vettel will be joined on the front row of the grid by Lewis Hamilton. Raikkonen took sixth behind Valtteri Bottas and the Red Bull pair.

Both Toro Rosso drivers failed to make it beyond Q1 after a terrifying near-miss between the pair approaching turn 15. Brendon Hartley was driving slowly with a puncture when Pierre Gasly appeared behind him on a flying lap. Gasly made to pass his team mate on the inside, then switched to the outside, missing the other car by millimetres at a point on the track where speeds approach 300kph, and coming to a safe stop in a run-off area.

Gasly was predictably furious, a mood which was not improved by his inability to reach Q2. His team mate joined him in elimination, apologising profusely on the radio for the mix-up.

Also out in Q1 was Romain Grosjean, who went off up an escape road and never came out, reporting a problem with his gearbox.

One of the stand-out efforts of the session came from Charles Leclerc, who put his Sauber 11th with his last run. Marcus Ericsson didn’t make the cut in the team’s other car.

Both Williams drivers did make it through, however, including Sergey Sirotkin in his car which had to be repaired after his crash in final practice. Lance Stroll made the cut with his final lap, knocking out Stoffel Vandoorne’s McLaren.

Kimi Raikkonen and Daniel Ricciardo flirted with disaster in Q2, both coming close to elimination. The Ferrari driver spun into an escape road on his initial run on super-softs and was unable to set a time. He switched to a set of ultra-soft tyres for his final run and made it in comfortably, setting the fastest time of the session, but compromised his strategy for the race as his closest rivals will all start on the preferred super-soft tyres.

Ricciardo also made it through despite dropping to 10th place when the chequered flag fell. Stroll came within a tenth of a second of knocking the Red Bull driver out, but had to settle for 11th place alongside team mate Sirotkin.

A near-miss with the barrier at the exit of turn 16 meant Raikkonen’s Q3 started little better than Q2 had. He crossed the line a second down on his team mate, who headed the field after the first runs.

The Mercedes pair came next, Hamilton three-tenths of a second behind the Ferrari, and a tenth quicker than his team mate. Max Verstappen led the charge for Red Bull, Daniel Ricciardo four-tenths adrift after brushing the wall at turn 15.

Hamilton got closer to Vettel with his final run but not close enough to threaten his pole position – the pair ended up separated by less than two-tenths of a second. A lock-up for Vettel on his final run meant he failed to improve his time.

Vettel’s biggest threat for pole position might have been his team mate. Raikkonen flew through the first two sectors of the lap, visibly committed, but asked too much of his car at the exit of turn 16. The SF71H slewed sideways as he tried to apply the power, sapping him of forward momentum at the beginning of the long drag to the start/finish line. That ruined his lap, leaving him sixth behind the Red Bulls.

The Force India pair delivered on their car’s potential by taking seventh and eighth ahead of the two Renaults. However a penalty means Nico Hulkenberg will start 14th instead of ninth.

122 comments on “Vettel on pole again as Raikkonen slips up”