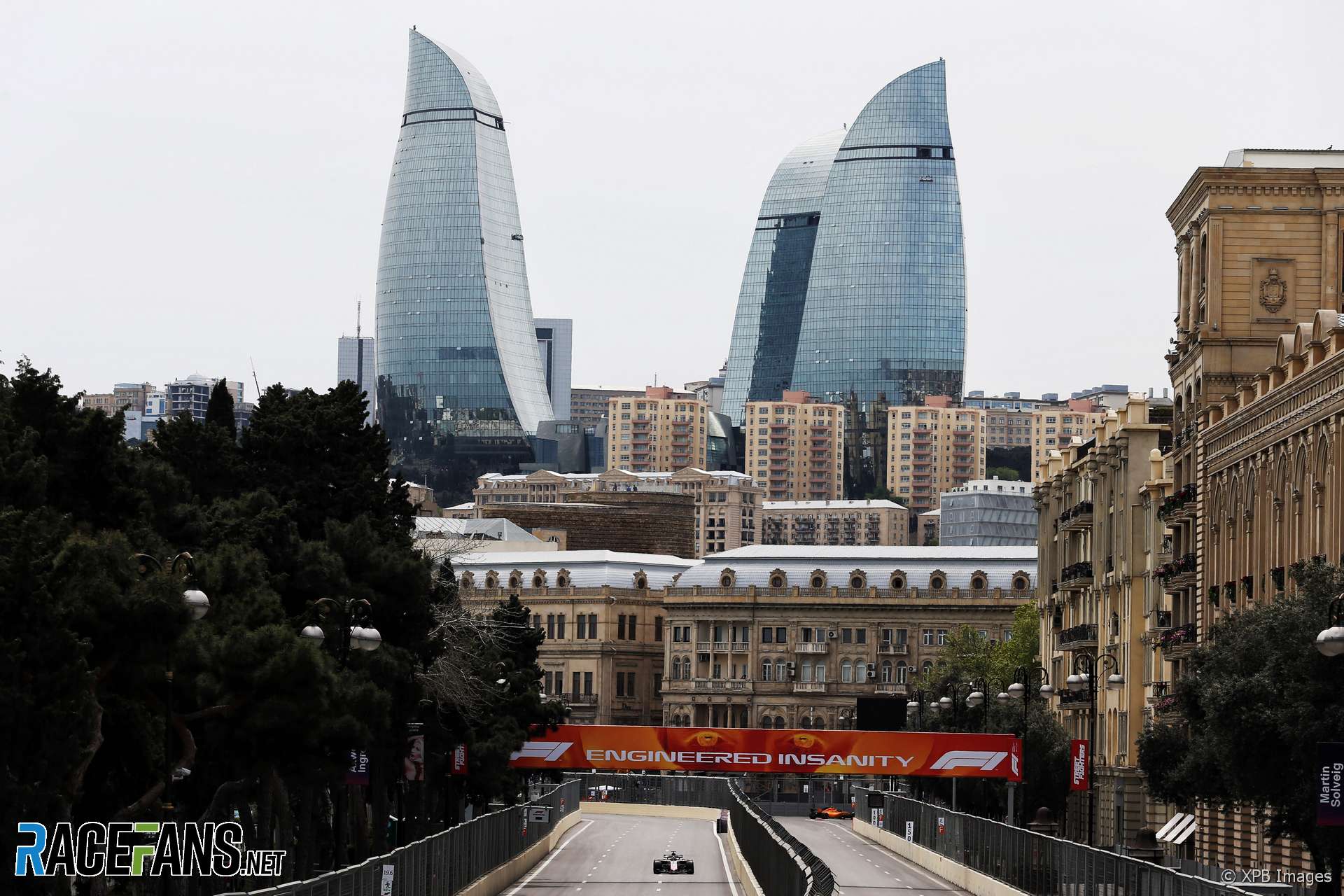 Azerbaijan may be known as the land of fire but Baku gets its name from the strong winds drivers face in today’s race.

In the paddock this weekend @DieterRencken has been chatting to race promoter Arif Rahimov, track designer Hermann Tilke and – after that heart-stopping near-miss in qualifying – a shaken Brendon Hartley.

I head off for the circuit, again amazed at how quiet Baku’s streets are. Over early morning coffee I checked out some Azerbaijan and Baku facts: The city (pop 2.3m) is situated 28m below sea level, and the country was once a major supplier of oil.

Indeed, at the turn of last century half the oil traded on world markets was extracted from beneath its soils, hence the name “Land of Fire”, named after the flames that would mysteriously spout from land and sea. In keeping with the moniker, the city’s three highest skyscrapers are flame-shaped and at night time are illuminated in the shape of swirling fire.

However, the most relevant fact – as it relates to the grand prix – is that Baku is also known as the “City of Wind”, which translates as Bad kube (pounding winds) in Persian and hence the modern name. By all accounts Baku will live up to its nickname on race day…

I had previously discussed New Zealand’s rich motor racing history with Brendon Hartley, and promised to send some links to a website that offers an excellent archive of free-to-view historical New Zealand videos, including evocative motor racing stuff.

Amongst those listed is a movie (Trio at the Top) on Bruce McLaren, Denny Hulme and Chris Amon; a feature on superbike designer John Britten, and the tragic but heart-tugging tale of sixties Moto GP rider Kim Newcombe, titled Love, Speed and Loss. Also listed is a bio movie on IndyCar champion Scott Dixon.

It’s good to know Brendon has an appreciation of motorsport beyond his own times, so dig out the links across and fire the email across. All highly recommended viewing, so here they are for info:

I’d requested a chat with race promoter Arif Rahimov, who said “grab me when you can”, so head up the control tower. He is in a meeting, but asks that I wait five minutes. True to his word, returns to tell the story of his third race. I won’t spill too many beans as we’ll be publishing the interview shortly, but one of the touch points was the time it takes to build the track every year – four month, with up to 400 people working full-time on it.

Lunch coincides with final practice, so I sit at the window of the media centre atrium munching cookies while watching the action and awaiting the end of the session to meet up with Hermann Tilke for a chat on track design and construction. Again no spilling of too many beans, but the German has to date designed 75 circuits across the globe. He also gives eye-opening responses some of the standard gripes raised about his track designs.

With qualifying starting at 5pm and an intensive roster of interviews thereafter I head to Mercedes for a quick salad, followed by fruits with cheesecake.

First on at the table to interview Hartley, who is visibly and verbally contrite about the “near-miss” with team mate Pierre Gasly in qualifying. It is obvious the Kiwi knows it could so easily have turned out far worse, and so down is he that the media pack decides to give him a break. Gasly, too, is still shaken when he faces us – and it is at times like this that one realises motorsport can be very dangerous regardless of halo.

Interviews done, I pack up, and head for apartment via a quick bite in a local restaurant. Dinner is coal-grilled lamb chops, roasted peppers with salad, Turkish bread and spuds, washed down with sparkling water. Not bad for less than a tenner. Thereafter I pack, ready to check out early(ish) on Sunday morning.