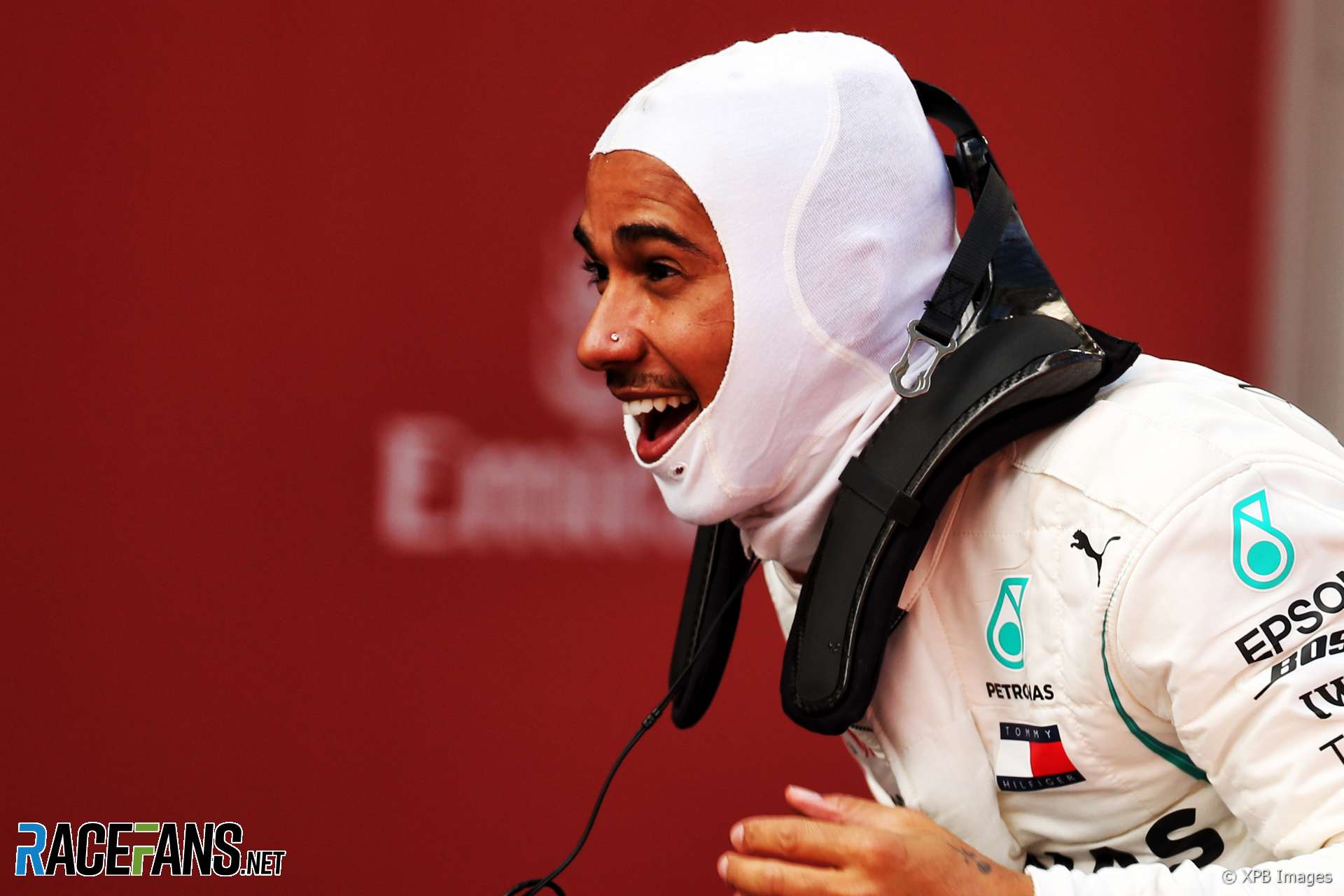 The Spanish Grand Prix wasn’t Lewis Hamilton’s first F1 race win of 2018, but it was a breakthrough.

A strong day for Mercedes coincided with Ferrari’s weakest performance of the season so far, and the result was a one-two finish which means the silver cars now lead both championships.

“They should have a clear advantage to go on a two-stop strategy because if the tyre change is decided by the wear, you take the risk to go to 100% wear you have a cliff, and then you lose a lot of time.”

That wasn’t how things turned out for the majority of the field, almost all of which made just a single visit to the pits during the race. Hamilton, who led them all home, said it was “a very easy one-stop” for him.

If his Azerbaijan Grand Prix win had been (hashtag) blessed by fortune, in Spain he was the class of the field. Valtteri Bottas looked in good shape throughout practice but Hamilton edged him for pole position by the slender margin of four-hundredths of a second.

In the race Bottas got drawn into a fight with Sebastian Vettel while Hamilton made good his escape. He didn’t ease up until the final sector of the last lap, and had a 20 second margin when he saw the chequered flag. The hunt for a fifth world championship is on.

Vettel slips off the podium

Vettel endured his most difficult day in the office so far this year, which leaves him trailling Hamilton by 17 points in the championship.

It started promisingly as the Ferrari’s strong acceleration helped Vettel split the front row-sharing Mercedes at the start. But by lap 16 Hamilton was seven seconds up the road and Ferrari knew Vettel’s 1.7 second margin over Bottas was not enough to keep him safe if the Mercedes driver dared to pit early and gain the benefit of fresher tyres. And there was the ‘cliff’ of tyre performance to beware of, too. Vettel was duly summoned in.

His pit stop was adequate – he was never likely to make it out in front of Kevin Magnussen’s Haas, so Ferrari must have been content to wait. Mercedes felt they could get away with leaving Bottas out an extra lap and his subsequent stop should have kept him ahead of Vettel. But a slow change dropped him back behind the Ferrari.

Few of the other leading drivers were tempted to pit this early. A lengthy Safety Car period at the start had helped tip them over into the realm of a two stop. As the laps ticked by and the likes of Hamilton, Kimi Raikkonen and the Red Bulls stayed out, Vettel’s first pit stop started to look increasingly hasty.

This had shades of the 2016 race, when Vettel and Daniel Ricciardo dropped themselves out of contention for victory by pitting when they might have stayed out. This time, Vettel was adamant Ferrari had to bring him in for another pit stop.

On the face of it seemed surprising given that he won in Bahrain, on a track where defending a position is much harder, by ekeing out a set of soft tyres far longer than was thought possible. But he was clearly struggling to keep his front-left tyre alive.

And while Bottas managed 47 laps on his medium compound tyres, the canvas was beginning to show by the end of the race. Mercedes ran to the limit on tyres which had been reduced in thickness by 0.4 millimetres to aid temperature control at this race (a tweak Vettel attributed to the lobbying of rival teams).

However Vettel made no excuses for Ferrari’s relatively poor showing. “To the end we weren’t quick enough and our tyres didn’t last as long as others. Otherwise I’d stay out, stay in front of Valtteri and finish second. It wasn’t an option and we finished fourth.”

Vettel also pointed out the reliability of the team’s car was unsatisfactory too. Raikkonen had a power unit change on Saturday and dropped out with more power-related problems in the race. Five races into a season where power units have to last seven, as the signs of strain beginning to tell?

“It feels nice to be on the podium and nice to have a good clean race,” said Max Verstappen after taking his best result of the year so far with third. “Clean” might have been exaggerating how well it went, as he almost wrecked his race and Lance Stroll’s by hitting the Williams driver during a Virtual Safety Car period.

Remarkably Stroll’s tyre remained intact and while Verstappen’s front wing didn’t, he was at least able to continue. The Red Bull driver tightened his differential and continued pretty much as before.

“I felt a bit more understeer in turn three and nine, and maybe braking a bit deeper into hairpins but, it was not too bad to be honest,” he said. “It was a little bit slower but I don’t think it affected me too much.” He was able to keep the recovering Vettel behind, though the Ferrari driver closed quickly on the final lap.

However Daniel Ricciardo didn’t have an error-free race either, spinning at the end of the VSC period. He described his car’s handling was like it was on a knife-edge, and though he set the fastest lap of the race for the third time this year he was well down in fifth place.

Magnussen rises above the midfield

With Raikkonen out, Magnussen won a one-car race for sixth place. The Haas driver was 50 seconds behind the next car and 36 seconds ahead of his closest pursuer at the end of the race.

He would have had his team mate to scrap with, but Romain Grosjean’s miserable season continue when he lost control of his car while following his team mate on lap one. Inexplicably spinning his tyres as the Haas pirouetted in the pack, he eliminated the blamed Nico Hulkenberg and Pierre Gasly from the race.

When Grosjean joined the Haas project it was supposed to be a stepping stone towards a Ferrari seat. But with no points to his team mate’s 19 and two wrecked cars in as many races, both due to incidents which were entirely his fault, that seems completely unrealistic. This was the clearest example yet of Haas’s potential being realised by one driver and squandered by the other.

The two home drivers followed a long way behind Magnussen, Fernando Alonso doing an impressive job in his updated McLaren to close on Carlos Sainz Jnr for seventh at the end.

Alonso had been badly delayed by the first-lap drama, scuppering his brave attempt to make up ground at the start on the super-soft tyres, which everyone else was avoiding like the plague (Sergey Sirotkin was the only other driver to run it, partly because Williams had selected too many of them.)

Force India’s revised car didn’t provide the obvious step forward they were hoping for. Sergio Perez delivered points for ninth but he had been running behind his team mate before a series of misfortunes ruined Esteban Ocon’s race.

Charles Leclerc grabbed another point for Sauber while Lance Stroll dragged the ill-handling Williams home in 11th. That probably flattered it, as he was pursued by Brendon Hartley, plus Marcus Ericsson’s Sauber.

While this was clearly Mercedes’ strongest showing and best result of the year so far, everything we’ve seen so far indicates the performance of each team is highly track and tyre-specific in 2018.

The silver team’s attention will now turn to Monaco: a race where they struggled last year and can expect to face the renewed strength of Ferrari and Red Bull 12 months on. If Spain felt a bit like watching past seasons again, that may all change again in a few days’ time.