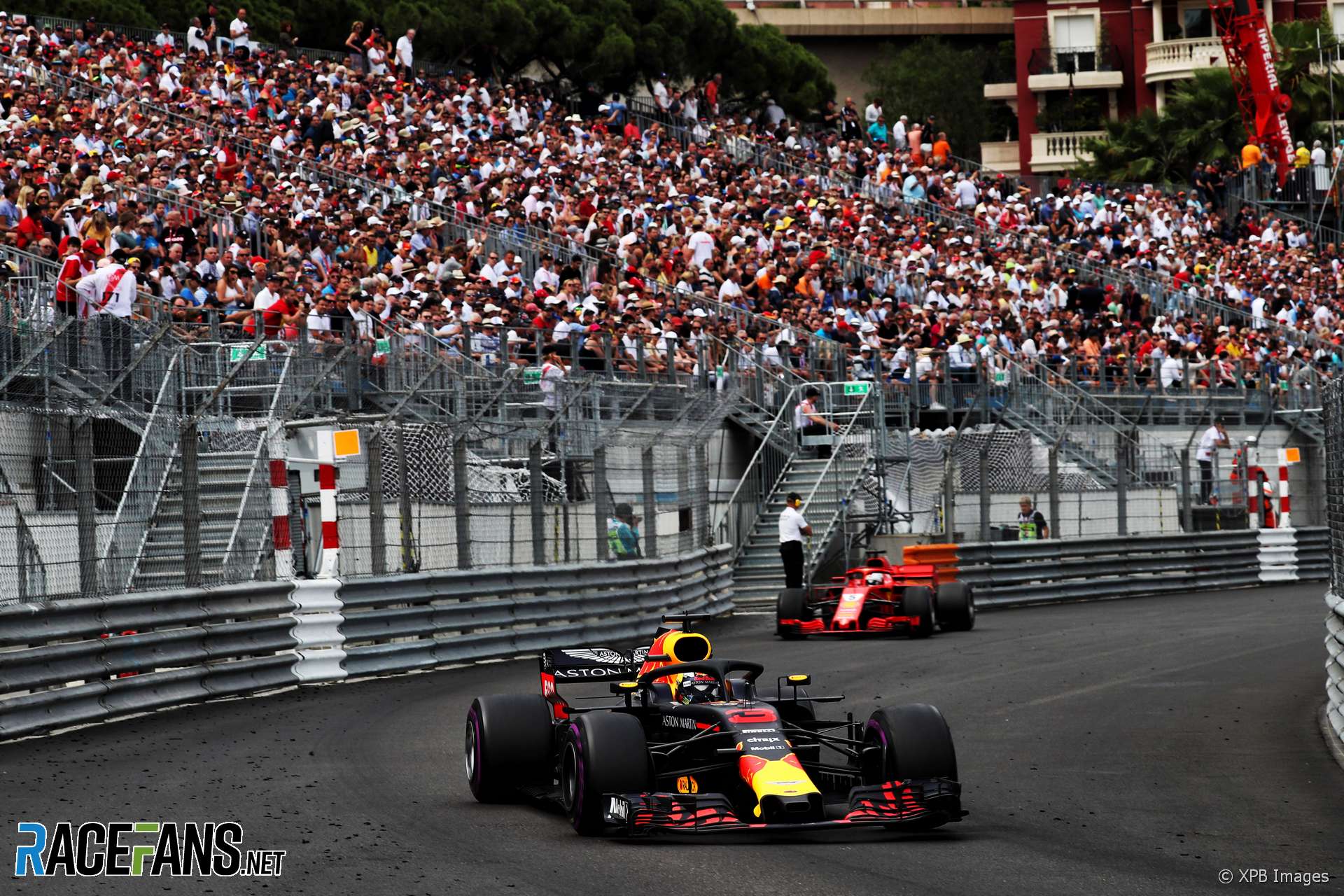 The outcome of the Monaco Grand Prix was far more intriguing than the events which produced it, at least as far as Sunday’s action was concerned.

Daniel Ricciardo established his credentials as a genuine championship contender. He did so at the expense of his team mate, who looked every bit as capable of winning this race until he smashed his car up in the final practice session, ensuring he would start from last place.

But the race itself was a deeply unsatisfying affair, run at pedestrian speeds by F1 standards as Pirelli’s much-vaunted new tyre failed to do the job.

Pole position at Monaco is of paramount importance. Yet for a variety of reasons the last three consecutive pole sitters had failed to win the race.

Ricciardo had been one of the unlucky three. He was on course for victory in 2016 when a shambolic Red Bull pit stop harpooned an otherwise faultless run.

That was one of few occasions Ricciardo’s dependably sunny demeanour vanished. It was a bitter result for a driver who clicked with Monaco the very first time he drove it, scoring back-to-back wins in the Formula Renault 3.5 support races in 2010 and 2011.

Red Bull arrived at the Principality knowing this was one of their best chances for victory this year. While Ricciardo headed both practice sessions on Thursday, Verstappen was a clear threat. There was almost nothing to choose between their sector times.

In Saturday’s final hour of practice Verstappen led the way to begin with. But as has been the case too often already this year, Verstappen made a misjudgement. To his credit he didn’t try to excuse this one, but it was costly enough.

Thereafter Ricciardo put a stranglehold on proceedings. He was quickest in all three phases of qualifying and set two lap times quick enough for pole position, the only driver to manage a sub-71 second lap. His start was flawless, and he coped admirably with having no MGU-K for almost two-thirds of the race.

The power unit problem forced Ricciardo to radically change his braking set-up and cope with a significant loss of performance. That he was able to overcome this and deliver the victory he’d been robbed of two years ago should have made for a tremendous story.

But it was hard to shake the feeling this had been sub-par as a sporting spectacle. There was one clear reason for this.

Monaco is an outrageous circuit. It is preposterously narrow, yet very quick in places with little run-off. Qualifying was a joy to behold as drivers danced between the barriers and well over a second was chopped off the previous track record.

But all that drama disappeared in the race.

When cars fuel up for the start of a grand prix they inevitably begin the race lapping much slower than in qualifying. In Azerbaijan, the last street circuit they visited, nine laps into the race drivers were lapping around 6% slower than qualifying pace.

In Monaco the corresponding difference was almost 9%. In relative terms the scale of that increase is huge – almost 50% slower. But you didn’t need a timing screen to see how much more slowly the drivers were going.

Everywhere they were steering well clear of the barriers and nursing some very ugly-looking Pirelli rubber. Pre-race fears the new hyper-soft compound wouldn’t last long had been realised, and many found the ultra-soft didn’t hold up well either.

The intention behind having rubber which degrades quickly is that it will encourage drivers to make more pit stops (multiple-stop strategies having been incorrectly defined as an essential element of good races). But making an extra pit stop means falling behind other cars. No one wants to do that in Monaco, where the lap time advantage needed to overtake is so huge that staying out on destroyed tyres is a worthwhile strategy.

When all the drivers converge on that strategy the result is a tedious race. Cue the depressing, knee-jerk calls for this unique, historic track – which will turn 90 next year – to be overhauled.

Change Monaco? No: the track was and is great. it has given us tremendous drama in the past, little of which has involved overtaking. Change the tyres: give the drivers some rubber they can actually drive on.

Would that produce more overtaking? Of course not. But at least we’ll get to enjoy watching F1 drivers pushing their cars to the limit again. Those who want to tear up the harbour in the hope of turning every Monaco Grand Prix into the Daytona 500 can learn to live with their disappointment.

A sour race for McLaren

McLaren achieved their best grid position of the season in Monaco. But for the first time this year they failed to score in the race.

This was a bitter setback at a track which should have suited them. Yet both drivers had their races compromised by reliability problems, both of which may have originated in the gearbox.

Stoffel Vandoorne went into qualifying with a fault the team knew it had no time to fix, and had good cause to think that without it he would have joined Fernando Alonso in Q3. In the race Alonso’s car stopped – McLaren’s second retirement in as many races.

Esteban Ocon turned in a fine ‘best of the rest’ performance to bag useful points for Force India. The pink cars are closing on the orange ones for fifth place in the championship.

Renault, courtesy of another double points finish, edge further ahead in fourth. But Carlos Sainz Jnr was seriously unimpressed at being told to wave Nico Hulkenberg through during the race as his team mate was on fresher, faster tyres. So much so that when his radio went silent his team asked him if it had broken. “I just don’t want to talk,” Sainz answered tersely.

He had good reason to feel slighted. After all if the massive tyre degradation and Ricciardo’s MGU-K failure had demonstrated anything, it was that there’s no upper limit to how slowly a driver can lap Monaco with little threat of being overtaken.

The rise of Ricciardo

Ricciardo’s victory leaves him 38 points behind leader Lewis Hamilton and 24 behind Sebastian Vettel. With a Renault power unit upgrade coming at the next race he retains a realistic chance of being a contender for the championship.

His second victory in four races also raises vital questions about his future at Red Bull. The team has already committed to Verstappen, who despite his protestations to the contrary is still yet to deliver a clean weekend this season.

Ricciardo’s stock has arguably never been higher. On this kind of form, who would pass up the chance to put his name on a contract for 2019?