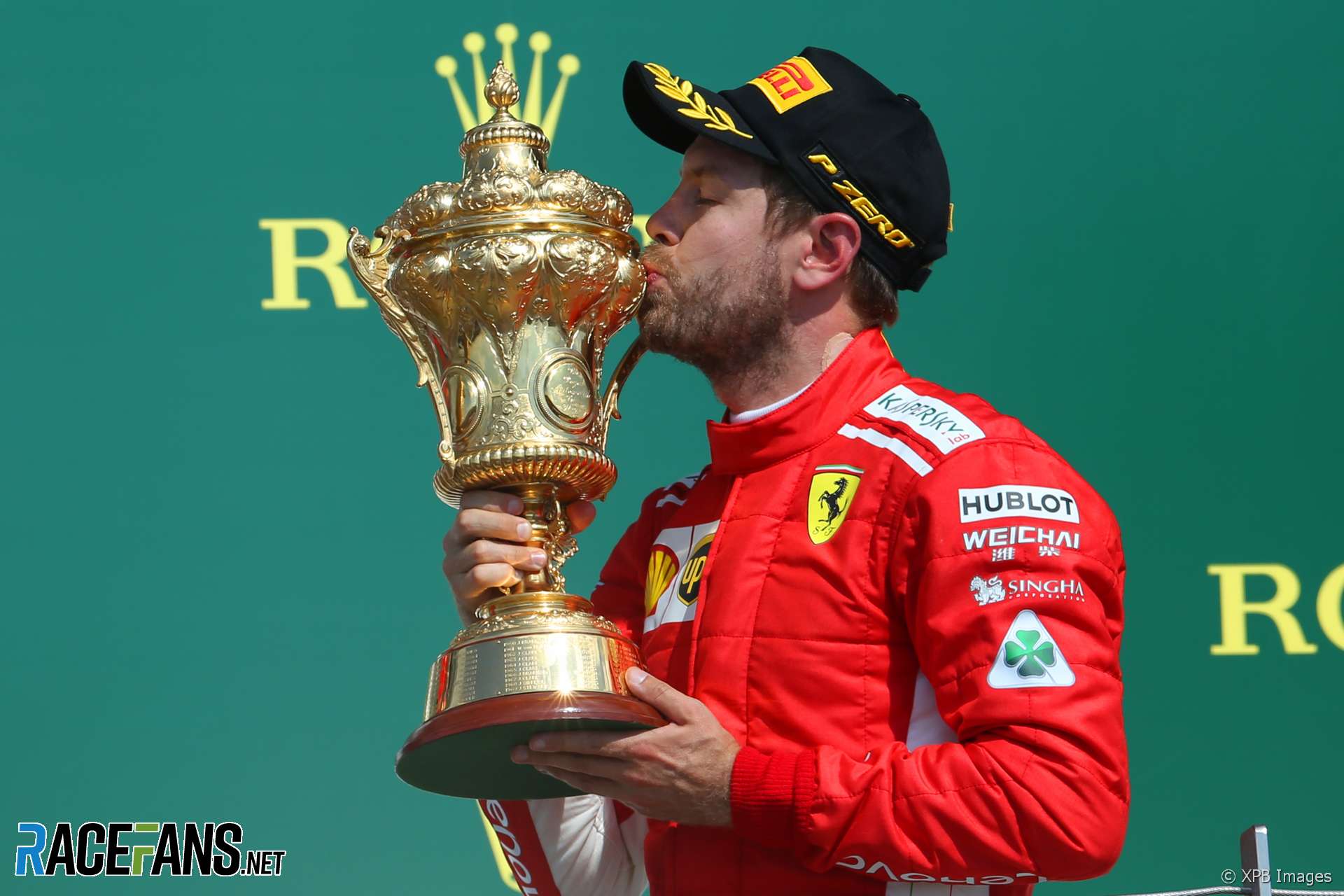 Sebastian Vettel credited his fourth victory of 2018 to the improvements Ferrari had made at Silverstone, a track where they hadn’t won for seven years.

“It’s been a difficult track for us,” he said. “This year I think we were a match.”

That certainly appeared to be the case in qualifying where it took an inspired, last-gasp effort from Lewis Hamilton to put his Mercedes in front of the two Ferraris by less than a tenth of a second. But the race would have been a much tougher affair had it not gone disastrously wrong for Hamilton at turn one.

Silverstone was unnaturally hot all weekend. The grass fried in the 30C-plus heat, and every time someone put a wheel wide they kicked up a vast cloud of dust.

The track’s new surface was grippy like the Circuit de Catalunya and Paul Ricard, but bumpy like the Nordschleife, at least according to Hamilton. It was also scorching – well over 50C.

But when the time came for Hamilton to communicate his Mercedes’ near-1,000bhp of grunt to the surface, he asked too much, and his rear wheels spun as the Ferraris pounced.

“I just had a poor getaway,” he said afterwards. “Too aggressive. Just got wheelspin and lost ground to the others.”

From second on the grid, Vettel was immediately by. Valtteri Bottas got away better from fourth than he had from pole in Austria last week, and passed his team mate for second as they rounded Abbey.

As they hammered into the first braking zone at Village, Kimi Raikkonen had a run on the inside of Hamilton. The Mercedes driver left the inside line free but Raikkonen snatched a brake and thumped the Mercedes into a spin.

The predictable claims Raikkonen’s innocent if clumsy misjudgement was in fact a nefarious act of sabotage grew louder after the race when Hamilton made insinuations about Ferrari’s “interesting tactics”. The stewards came down on his favour and gave Raikkonen a stiffer, 10-second penalty than the five seconds Vettel had been penalised at Paul Ricard.

FIA race director Charlie Whiting – who is not part of the stewards’ deliberations on incidents – offered his view on the decision afterwards.

“I can only think that they felt it was a little more serious than what Sebastian did in France,” he said. “I don’t know the thought process that they’ve done there. But I do know there was widespread criticism of the lenience of the penalty given in France so maybe that affected it.

To begin with Vettel scorched off into the lead, pulling six seconds clear of Bottas in 10 laps. But in the second half of the stint the Ferrari was plainly starting to struggle with its tyres, as Mercedes predicted it would.

By lap 20 Bottas was 4.4 seconds behind. Ferrari, possibly still scarred by their experience in China, summoned Vettel in for fresh rubber. Bottas followed on the next lap.

Meanwhile Hamilton had cut a swath through the midfield with ridiculous ease. He passed more than one car per lap on average until, by lap 10, he was back in the top six. It had cost him time, however: having been 13.7s behind Vettel at the end of lap one the gap had doubled.

But from that point, once Vettel and Hamilton were running in clear air, the Mercedes driver took five seconds out of the Ferrari over 21 laps. Later in the race, after Vettel’s second pit stop when he was running on tyres that were both softer and fresher than Hamilton’s, he was hardly able to pull away.

Ferrari may have raised their game at Silverstone, but even in the heat the Mercedes was the quicker car. Nonetheless Hamilton didn’t seem to have the kind of performance advantage to suggest he could have won without ease had Raikkonen not rammed him out of third place. It was his poor start that ruined his day.

Vettel admitted Ferrari had “probably still some weaknesses in the race at different phases.” In particular, “At the end of the first stint, I think Valtteri was a bit faster,” he added.

Had the Safety Car not appeared, Vettel might have had a tough end to the race on fading tyres with Bottas looming in his mirrors. But when Marcus Ericsson failed to active his DRS at Abbey while chasing Sergio Perez, his car snapped into a violent spin and crashed nose-first into a barrier.

This gave Vettel the chance to pit for fresher rubber, which in turn gave Mercedes the chance to stay out and gain track position. Both seized the opportunities.

For Bottas, this meant a long, 31-lap stint on medium tyres. His cause was aided when the first Safety Car period was followed immediately by a second: Romain Grosjean twitched into Carlos Sainz Jnr as the pair went side-by-side, triggering another huge, high-speed crash.

In total around 10 laps of green flag running were lost. When the race finally got going again Bottas had to fend off Vettel, Hamilton was now up to third and Raikkonen behind him was scrapping furiously with Max Verstappen.

Bottas executed a pair of flawless restarts to keep Vettel at arm’s length. But the Ferrari came back at him and, as Bottas’s tyres faded, Vettel grew ever more threatening. For lap after lap Bottas positioned his car carefully, defying Vettel’s attempts to wrest the lead.

“It was quite intense,” said Vettel. “Obviously I had the advantage on the tyres but he had the clean air. In the high speed stuff I was able to follow, but it was difficult the closer I got.”

Vettel bided his time. On lap 46 he tucked in behind Bottas as they approached Brooklands, the left-handed which offers one of the best opportunities for overtaking. The next time around Bottas got a slightly poorer run onto the straight. Again Vettel tucked in behind him and then, at the last possible moment, jinked to the inside. Bottas had no answer – Vettel stole the inside line and seized his chance for victory.

“I was able to surprise him so I think he thought that I won’t dare [go to] the inside,” said Vettel. “The braking zone was coming quite fast but I thought OK, I have to go for it because I was obviously also struggling – the longer I spent behind him, struggling with my tyres as they got hotter, and losing that advantage that I had a little bit.

“I felt great when I was side by side and wasn’t sure if I would make the corner but I did.”

Over the final laps Bottas’s worn tyres left him unable to keep Hamilton and Raikkonen behind. Staying out on worn tyres had been a gamble worth taking, he said afterwards, but in retrospect it was clearly the wrong decision.

Red Bull out of the running

Red Bull never figured in the fight for the lead, their down-on-power engines seeing to that at a track where more and more corners are now taken flat-out. A brake-by-wire problem scuppered Verstappen’s run to fifth which was instead taken by Daniel Ricciardo, who made a second pit stop before the Safety Car came out.

Haas squandered their best-of-the-rest starting positions when Grosjean blundered into Kevin Magnussen. The former then crashed out, while Magnussen recovered to a handy ninth.

Instead Nico Hulkenberg took an excellent sixth. He came under pressure from Charles Leclerc early in the race but the Sauber driver retired with a loose wheel following an early pit stop in an attempt to get ahead of the Renault.

“When you are pushing everything to the limit sometimes it happens, you do mistakes,” said Leclerc. “It’s a shame because we were fighting for P6 because at the end Nico finished P6 and I think the undercut was working very well but it happens and we’ll come back stronger.”

Esteban Ocon took seventh for Force India and team mate Sergio Perez was promoted to the final points place after Pierre Gasly was penalised for barging into him late in the race. Perez was especially lucky to come away with a point having almost been collected by the Williams pair when he spun into the pit lane exit at the start.

Fernando Alonso took eight for McLaren, three places ahead of team mate Stoffel Vandoorne, who was unhappy with his car all weekend.

Saturday had been an uncomfortable day for Vettel who had to rest his head in the car to ease the strain on his neck. Sunday more than made up for it, however.

His victory may have been inadvertently aided by his team mate, but it was a hard-fought win, one which increases his championship lead to eight points.

Following the race he spent a while checking out his prize, the classic BRDC trophy, which his name will be added to for the second time. “The trophy obviously carries over names of previous winners but it stopped in 2005 so I was wondering where the last 13 years have been,” he said.

“And then when I came back to the podium room, they showed me that there’s another bit that they forgot to put on. But for sure it’s a very prestigious trophy with a lot of names.”

Before this weekend the four most recent names on the trophy were all Hamilton’s. Missing out on a home victory he was clearly quick enough to take will undoubtedly have rankled with Hamilton. But he will have the chance to return the favour: Vettel’s home race is next.