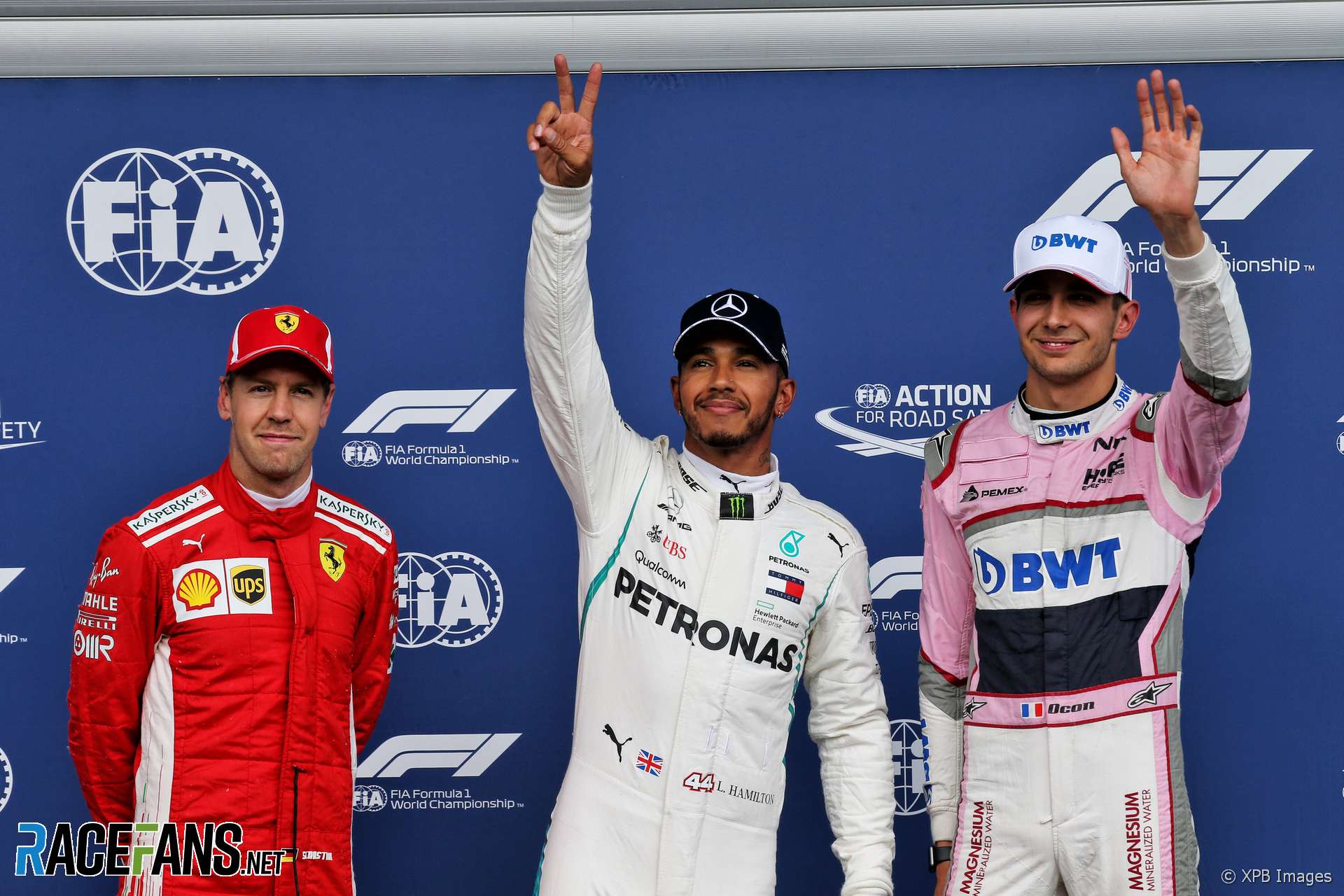 Lewis Hamilton took pole position after a rain shower hit Spa-Francorchamps in the latter stages of qualifying for the Belgian Grand Prix. Championship rival Sebastian Vettel will start alongside him.

The dramatic final stages of qualifying saw Force India lock out the second row of the grid in the slippery conditions.

Lewis Hamilton and the Ferrari drivers took soft tyres for their Q1 runs, allowing them to save a set of super-softs for later. All three easily made it through as did Valtteri Bottas, notwithstanding the fact his power unit penalty will relegate him to last on the grid.

A miserable home weekend continued for Stoffel Vandoorne. Having been last in all three practice sessions, and despite getting a tow from team mate Fernando Alonso, he ended up last again in Q1. Alonso also failed to cut.

The pair were separated by the two Williams drivers. The other car to drop out at the first round was a Renault and, unfortunately for the team, it wasn’t the one which would be starting at the back anyway.

Nico Hulkenberg made the cut for Q2 but a pair of power unit penalties means he will start from the back row. With Carlos Sainz Jnr missing out on a place in Q2, Renault’s fears the race weekend wouldn’t be one of their strongest were realised.

In dry conditions the fight for pole position looked extremely close. Hamilton, Vettel and Raikkonen were separated by just five-hundredths of a second in Q2.

While Hulkenberg opted not to run any further Bottas chose to continue and take a place in Q3. That was bad news for Pierre Gasly, the first driver to miss the cut for the top 10. Team mate Brendon Hartley was just two-hundredths of a second slower.

Despite a strong showing in practice neither Sauber driver made it into the final 10. A somewhat scruffy lap by Charles Leclerc left him 13th and Marcus Ericsson got out of his car before the final runs began.

Drops of rain began to fall as Q3 began. The change in weather made the final minutes of qualifying an edgy, nail-biting affair.

The drivers queued up to join the track on slick tyres as soon as the session began. But with the rain intensifying almost all of them immediately returned. Bottas, who led the field around, was fortunate not to hit anything when his car snapped out of control at Blanchimont.

The only drivers who didn’t head for the pits were the Force India pair, who gambled on the rain shower passing quickly. It didn’t, and Sergio Perez had an even closer near-miss when he lost control at the top of Raidillon. Both joined their rivals in the pits for intermediate tyres.

Bottas didn’t return to the track – his purpose in reaching Q3 may have been to give his team mate the benefit of a slipstream, which the wet conditions rendered too great a risk.

The Ferrari pair led the way when the track was at its dampest, with first Raikkonen then Vettel leading the times. But as the track dried out Raikkonen had to head for the pits, missing his opportunity to run when the surface was at its best.

Vettel was on track when the track was quickest – but so was Hamilton. With his final lap the Mercedes driver leapt a remarkable three seconds clear of the field. Vettel clawed much of that back with his last run, but still ended up seven-tenths of a second behind his rival.

The Force Indias, now on intermediates, then produced the surprise of the session. First Perez, then Esteban Ocon set the third-quickest time, locking out the second row of the grid.

Romain Grosjean put his Haas fifth ahead of Raikkonen, followed by the Red Bull pair. Max Verstappen said afterwards the team hadn’t put enough fuel in its cars to ensure they could run in the final laps.