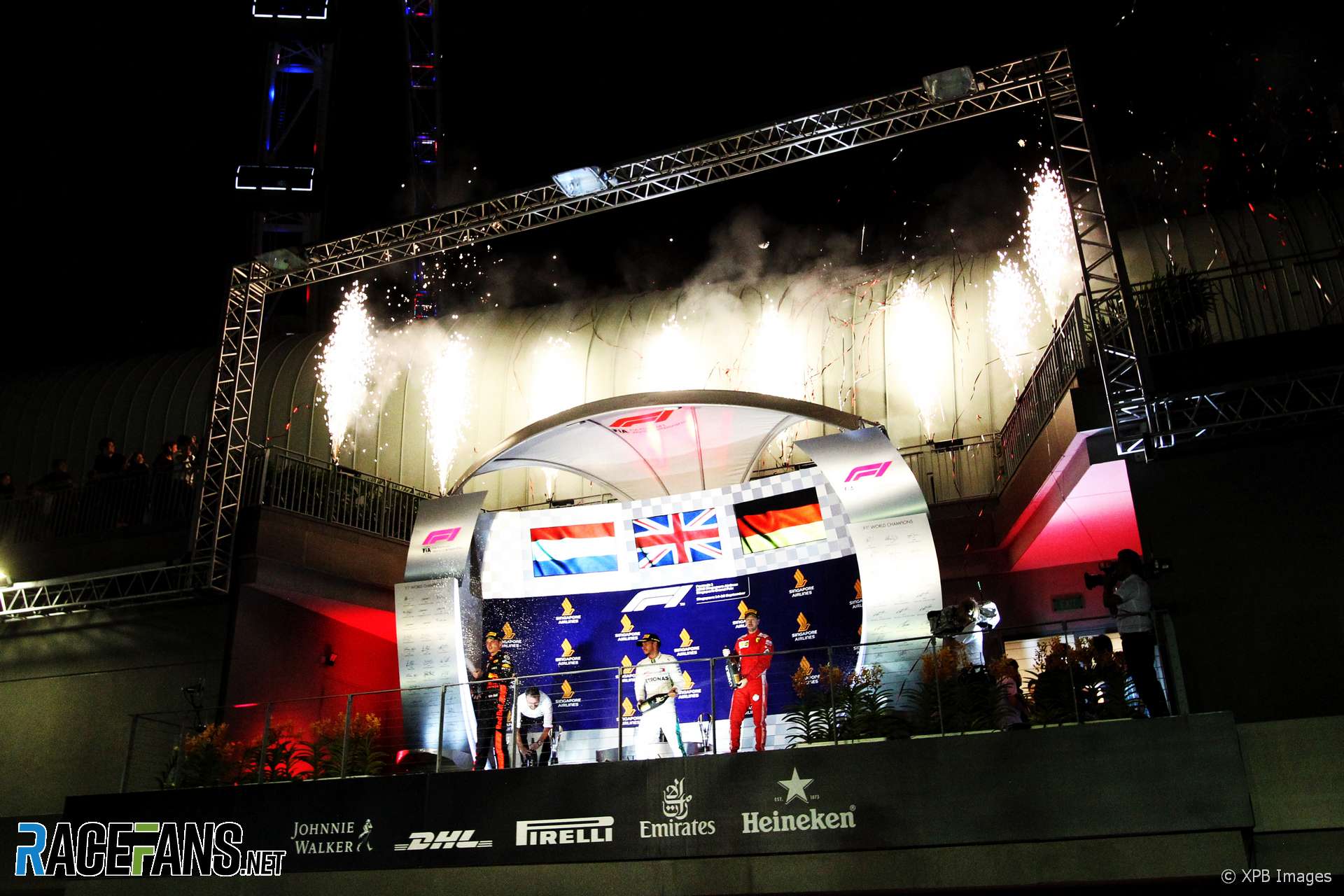 It was clear on Friday that Mercedes had found something.

Lewis Hamilton’s opportunistic victory 12 months ago notwithstanding, Singapore has been a weak circuit for them in recent seasons. But now the drivers were talking about a “massive improvement” the team had unlocked, despite not having brought a significant upgrade to the track (their Singapore upgrade was moved forward to Monza).

Even so, Hamilton’s lap for his fourth pole position in Singapore was something special. So too was Max Verstappen’s run to second in his Red Bull, which relegated pre-race favourite Sebastian Vettel to third on the grid.

What followed on race day was a bold but ultimately unsuccessful effort by Vettel and his team to deny Hamilton another win.

Passing Verstappen was the first objective for Vettel. He did it on the first lap – though he had only seconds to spare when he completed the move.

While Hamilton, Verstappen and Vettel motored through the first corners in grid order, the Force India pair clashed with destructive results. Esteban Ocon spied an opportunity to go around the outside of Sergio Perez, and even nosed slightly ahead of his team mate at turn three.

On the exit of the corner Perez drifted wide, dumping his team mate into the barrier. It would not be the last time Perez’s peripheral vision was found wanting in the race, though on this occasion the stewards apportioned no blame.

That brought out of the Safety Car, and the call was made just as Vettel was nosing past Verstappen at turn seven. He grabbed the place, and was perfectly poised to apply pressure to Hamilton at the eventual restart.

When the race resumed, however, Hamilton easily reasserted himself in the lead of the race. The interruption had usefully allowed him to extend the length of his first stint on the very fragile hyper-soft tyres. Now he nursed them for the opening phase: “just use the [power unit], not the tyres,” race engineer Pete Bonnington reminded him, until they got within range of making what would be their only pit stop.

“We were going quite slowly in the beginning,” explained Vettel. “I think a couple of laps after that, Lewis decided to push. Obviously, when your tyres are fresh you can choose the pace a little bit here and not be under threat because the corners that matter, you still have very good exits and it’s difficult to get close.”

With overtaking on the track being virtually impossible, this was Ferrari’s best chance to get Vettel ahead. Bringing him into the pits first and giving him a quick initial lap on fresher tyres might allow him to ‘undercut’ Hamilton.

To maximise their chance of success, Ferrari opted not for the soft tyres as per the standard strategy, but the ultra-softs which were two stages softer. The extra performance on the first lap could have proved the decisive edge.

But the ultra-softs had proved not as quick compared to the soft as Pirelli expected before the race weekend began. Friday running showed it was around 0.8 seconds per lap faster, roughly half what Pirelli had predicted. Vettel’s gamble was also compromised by the fact he rejoined the pack behind Perez. No doubt Mercedes timed the point at which Hamilton began pushing in order to ensure that if Vettel did respond by pitting he would have this piece of traffic to clear.

It worked beautifully for Mercedes – and Red Bull. Not only did Hamilton pit and rejoin ahead of Vettel but so did Verstappen, and again there was just millimeters in it. Vettel took a look but decided against hanging it around the outside, Ocon-style.

As Vettel pointed out afterwards it had been a risk worth taking, which could have earned them a stunning win. But Mercedes held the trump card of track position and played it to perfection.

From this point the podium order was almost certain. ‘Almost’, because Hamilton was badly held up by Romain Grosjean later in the race while the Haas driver was trying to lap Sergey Sirotkin.

Protocal dictates drivers must stop trying to pass cars in front of them as soon as a driver who is a lap ahead gets close enough for the blue flags to be waved. Grosjean, too preoccupied with trying to pass Perez, forgot this.

“Just be careful with this lot,” Bonnington warned Hamilton as he closed within range of the Haas. “Blue flags,” Hamilton called with increasing concern. Meanwhile the Red Bull closed from five seconds behind to within striking range.

Hamilton moved off-line to thwart a speculative look from Verstappen. A few corners later he was out of danger. “That was ridiculous,” he said, while the stewards prepared to hand down yet another penalty against Grosjean, who is increasingly at risk of incurring a race ban.

For a while Vettel was able to stay close to Verstappen, and even entertained hopes of getting the Red Bull out of the way. “Is Verstappen losing oil or water?” he asked. “Nothing on his radio but we keep monitoring,” came the reply. But as Vettel’s ultra-softs faded, Verstappen drew out of sight.

Was it a tactical error by Ferrari to put Vettel on ultra-softs? No. This was a case of having nothing to lose. The ultra-softs gave him the best possible chance of jumping Hamilton and staying ahead of Verstappen, but neither happened. Once that was the case it hardly mattered if he finished three seconds behind Hamilton or 30, as he did.

The top three had reverted to the order they started in. The next three never looked likely to finish any differently.

Ferrari told Raikkonen to do the opposite to Valtteri Bottas, so when the Mercedes came in Raikkonen stayed out in the hope of ‘over-cutting’ his fellow Finn. He stayed out another six laps to no avail, and on the lap after Raikkonen pitted Daniel Ricciardo did the same.

Over the remainder of the race the trio closed up but none were close enough to have the slightest hope of making a pass.

“We had the speed but no way to pass other people,” Raikkonen rued. “Pretty boring.” Perhaps taking inspiration from that Ferrari titled their post-race press release “boredom wins in Singapore”. Accurate, perhaps, but hardly an example of graciousness in defeat. At least this year both their cars saw the end of lap one, never mind the chequered flag.

Ricciardo was equally unimpressed with the lack of realistic overtaking opportunities. “I really had to hope for a mistake or that Kimi and Valtteri would start tangling and I could capitalise,” he said. “I got close at turn 13 on the last lap, but it wasn’t close enough.

With the hyper-softs performing so poorly over a stint, the four lowest-placed drivers in Q3 were always going to be at a serious disadvantage due to the rules which force them to start on old rubber. And so it proved.

“Ot was a frustrating race for everyone who qualified between seventh and 10th on the hyper-softs,” said Grosjean. “It was such a poor tyre in the race.

“We did 10 laps and they completely went, while the ultrasofts did, I don’t know how many laps, 40? So, it’s almost better not to qualify in the top 10. Maybe we need to think about that a little bit because I felt like I pushed really hard in qualifying and in the race every single lap.”

Grosjean, who started eighth, dropped behind Sirotkin after the Williams driver made an early pit stop during the first Safety Car period. Race control told Williams to bring their man in as he had a piece of Ocon’s wheel rim lodged on his front wing. Sirotkin, who for this particularly gruelling race had been allowed to run with a drinks bottle for a change, took a fresh set of soft tyres and rejoined the track where he proved the bane of several drivers’ races.

Grosjean fought his way past Sirotkin, though he collected a penalty. Perez swerved alarmingly into the side of the Williams, badly damaging the FW41 and collecting a drive-through penalty which ensured Force India ended the day point-less. And Brendon Hartley was forced off the track when Sirotkin got a bit too vigorous with his defending. This time it was the Williams who took the penalty.

Nico Hulkenberg was therefore the only driver who scored a point from the fourth or fifth row of the grid. Fernando Alonso, who on Saturday was pleased to take ‘new tyre pole’, came home first among the midfielders, and the only one of them still on the lead lap. Alonso and Hulkenberg were separated by Carlos Sainz Jnr – who acknowledged that failing to reach Q3 had put him at a tyre advantage – and Charles Leclerc, who made up for his Friday crash with another points finish.

With his seventh victory of 2018, Hamilton has moved into a position where the championship is almost – but not quite – his to lose. A 40-point lead over Vettel means he could beat his rival just once in the remaining six rounds and still take a fifth title.

Singapore continued a five-race streak in which Hamilton’s efforts have been almost faultless. He’s only dropped seven points from a potential haul of 125 in that time.

On paper, Ferrari still appears to have the better car. But if they can’t start making that count on a Sunday, their best chance of championship silverware for years will pass them by.