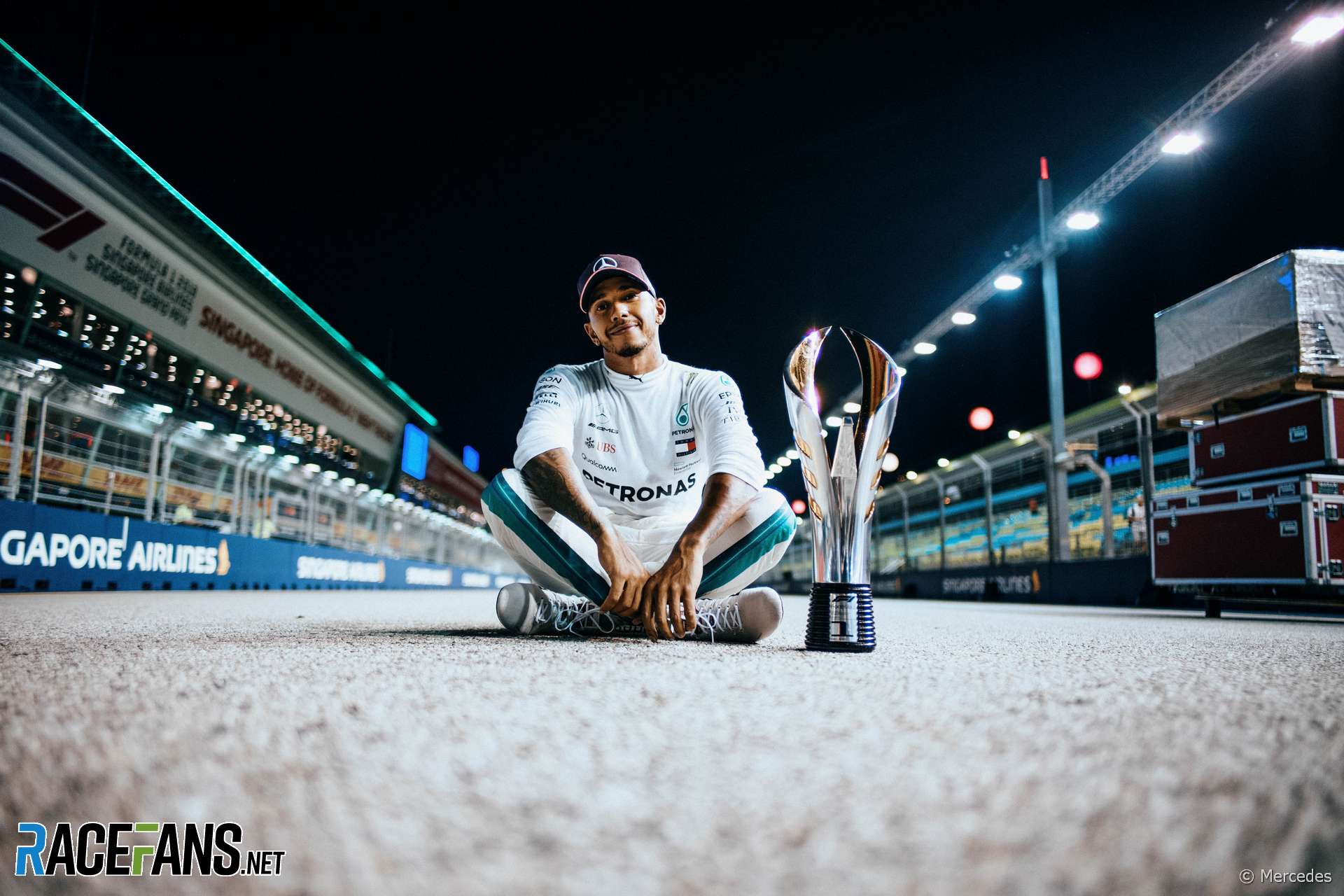 In the round-up: Lewis Hamilton says he is not thinking about playing it safe to bank points despite his increased points lead over Sebastian Vettel.

Hamilton is 40 points ahead of Vettel with 150 available and says he can’t afford to do anything other than focus on winning:

There’s just no need for me to look at the next races and say ‘OK I need that there’. In my mind I need to win every race so I literally just focus on trying to do that. I arrive wanting to win.

There’ll be weekends where we know we maybe will be comfortably stronger, for example, and weekends like [Singapore] where we knew that we’ll be behind

But we still have the belief that we can win. I want to win every race, that’s the goal, and continue with the consistency. I’m just not looking at the points.

Of course I didn’t think I would have 40 points at this points and it’s nice having that but it doesn’t mean it’s not the end. Until you say that it’s mathematically impossible and you’re sitting there saying it’s impossible, that’s the day that I’m working towards.

We are looking for 2011 Marussia MVR02 bits – torsion bars, wishbones, uprights, dampers. Anything along those lines. Please email us at f1partsfinder@hotmail.co.uk @ScarbsTech @HondaRA107 pic.twitter.com/uW8JkgKgyd

Bizzarre #Berger and #FIA after pursuing the F4-F3-F2-F1 route killing the parallel series, now say ok to the F3 ITR. And that the F3Open was not granted the F3 name because single-brand Dallara-Toyota while now the F3 Regional license FIA is a single-brand. Who want to make fun?

Just seen the worst simile ever. BBC breakfast news compares Tiger Woods come back after back pain and not being able to keep his pants on to Niki Lauda’s F1 win after his crash in 1976! #BBCBreakfast

"Tiger Woods has made the greatest comeback in sports history."

Niki Lauda came back from nearly being burned to death in 1976, still nearly won the #F1 World Championship that year and went on to win the title twice more. Amongst other things he lost an ear and damaged lungs

I must say, I’m feeling a certain type of nostalgia and proudness seeing Mick Schumacher coming through and dominating the way he is. I don’t think I’ve missed an F1 race for 20 years, so this is beautiful to see, and I miss the name in the sport. Keep going kid! 🏎 💨 🇩🇪

Mick Schumacher says he won't respond to Dan Ticktum's (now-deleted) insinuations about his sudden upswing in performance, saying he wishes to let his driving speak for itself and address the subject after the season is over.

"With drivers, like bringing Fernando (Alonso) or Lando (Norris) over? Sure that’s fine. But United will never be a McLaren (factory) team."

"Raikkonen visited the factory on Friday for meetings with senior staff, and create a seat-fitting mould that can then be used around him in the cockpit of the 2019 design."

"Patch 1.09 is now available on Steam. Patch 1.08 has now been rolled into 1.09 for release on consoles, this will be on its way to PS4 and Xbox One in the coming days. You can check out the patch notes for 1.09 below, which will also include the notes from 1.08 if you’re a PS4 or Xbox One player."

Has Lance Stroll been judged too hastily?

Everything points to the fact that Stroll has a lot of potential.

His results in the junior formulas were very good, winning every championship he entered. Especially his second year in Formula Three was stellar. Incidentally, he beat George Russell, who seems to be quite highly rated, in both his years in Formula Three. I personally was initially sceptical of Stroll, he had some pretty stupid accidents in his first year of Formula Three, but he quickly matured. It was this change in his approach to racing which convinced me to watch his progress closer.

His first year in Formula 1 was very good. One podium position and only three points short of Massa. What amazed me the most is that he almost had no incidents, for which he was responsible. Very clean driving, and that in spite of having to regularly pass a lot of cars, due to his bad qualifying. His qualifying problems, due to not making the most of his tires, is the only negative point I can come up with.

You can’t really judge how Stroll is doing this year, because of the bad Williams. That is why I am really looking forward to seeing Stroll in the Racing Point next year. What I am worried about though is all the conspiracy theories which will inevitably appear, when Stroll does better than most people expect.
@Uzsjgb

39 comments on “Hamilton: “In my mind I need to win every race””