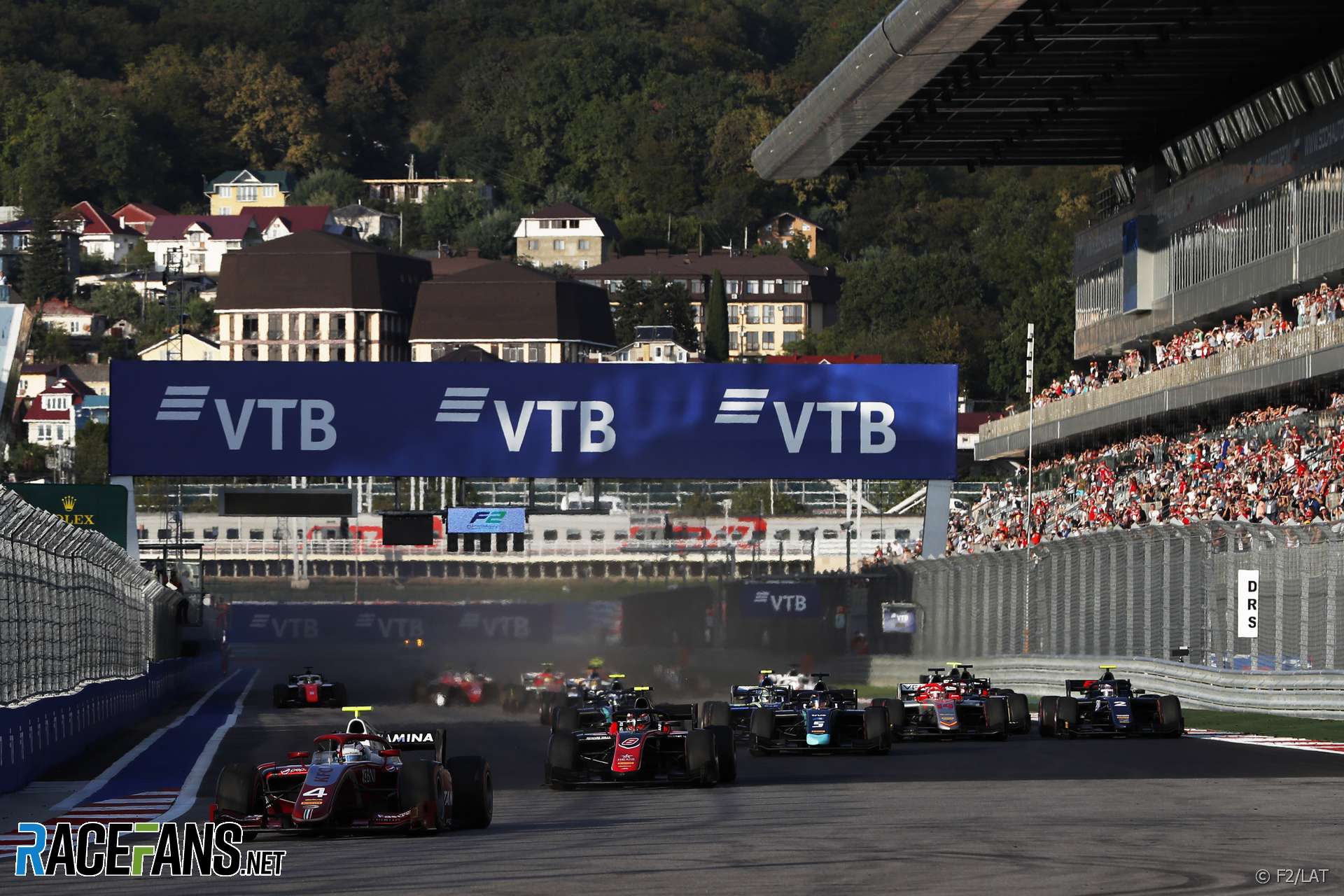 Alexander Albon won an eventful Formula Two race in Sochi and moved up to second in the championship ahead of Lando Norris, whose title hopes were wrecked by a botched pit stop.

Norris had slipped back to eighth by lap two, while championship leader Russell was overtaken by Albon. However Antonio Fuoco, on the harder tyres, passed the lot of them, and Markelov used the same rubber to rise to third.

With the soft tyre degrading rapidly several drivers pitted soon after the pit window opened. De Vries, Norris and Russell were among those to come in, but Norris inexplicably swerved into the Trident pit box by mistake. He drove on to the waiting Carlin team, but was then released before his front-right wheel was fitted, ruining his race.

Markelov pulled out a gap of over 30 seconds back to De Vries, who was leading those who had pitted. However a radio call from Markelov’s engineer revealed communication problems at Russian Time. This meant their driver was left out on degrading tyres, having to guess when to pit

Second-placed Albon pitted smoothly on lap nine and rejoined ahead of De Vries, giving himself the effective lead of the race with only those yet to make stops ahead of him. Markelov, however, came in on lap 20, clearly without communication as Russian Time weren’t ready for a pit stop and his resultant eight-lap stint on the super-softs was too long. He rejoined 11th, 40 seconds off the lead.

Albon was able to repeat Markelov’s charge to the front, picking off any cars ahead of him not wise enough to pit and extending a lead over both De Vries and Latifi, locked in a fight that stopped either closing the gap.

A lock-up by De Vries let Latifi through, with the DAMS teammates in one-two for the last three laps of a chaotic race, won commandingly by Albon whose calm management of alternate strategy paid off once again. Latifi in second and De Vries in third joined him on the podium.

Two cars retired on the first lap, Markelov’s teammate Tadasuke Makino was involved in a turn one incident that saw Luca Ghiotto limp back to the pits and end his race. Sean Gelael’s Prema, meanwhile, didn’t make it off the grid with a revisit of clutch issues that dogged the series earlier this year.

Albon’s win moves the future Formula E racer ahead of Norris in the F2 standings on 201 points, 30 behind Russell, who came in fourth. With 65 points remaining over the last three races, Russell’s championship position looks increasingly strong.