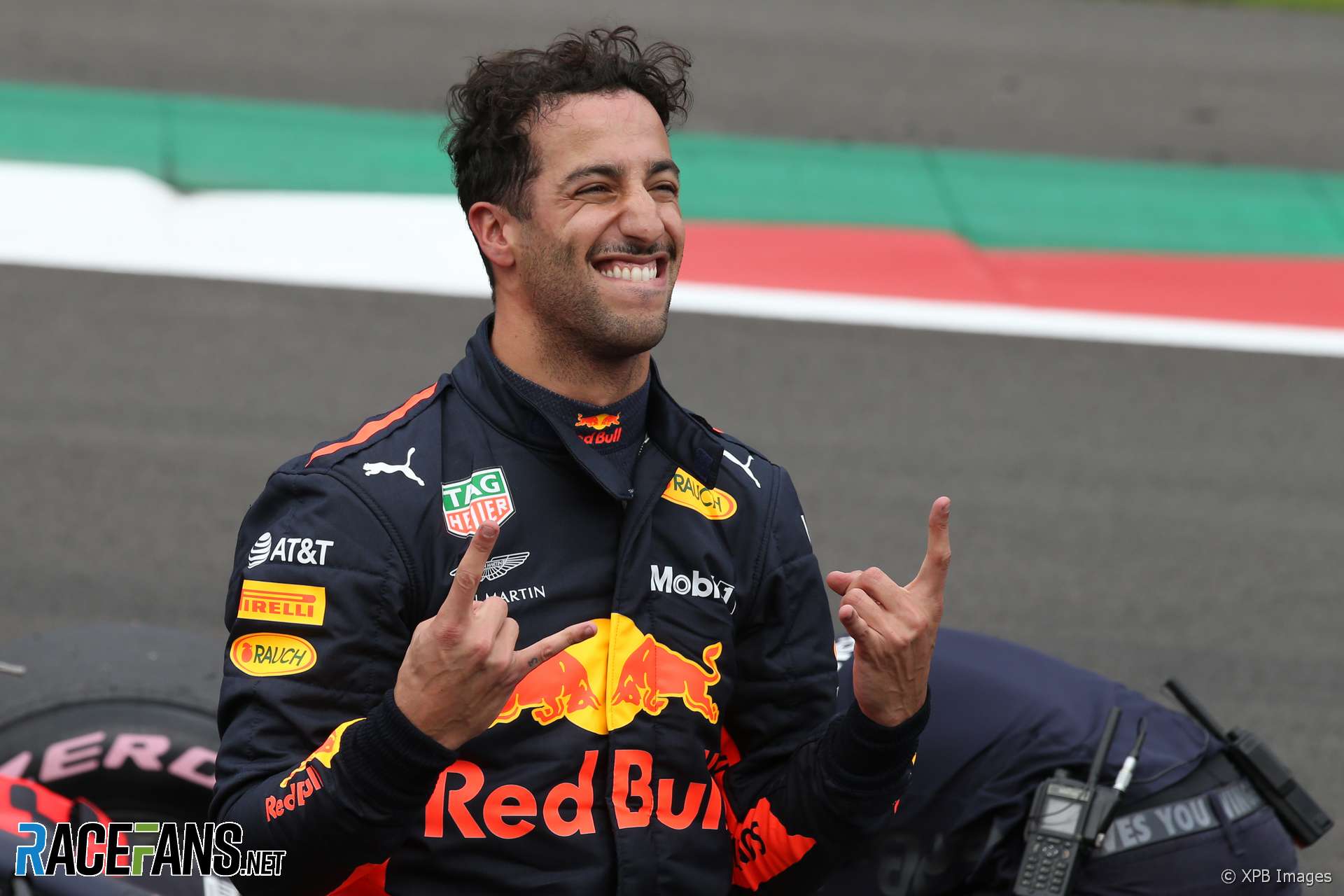 Daniel Ricciardo stunned team mate Max Verstappen by beating him to pole position for the Mexican Grand Prix by two-hundredths of a second.

Verstappen led much of the way throughout qualifying but on the final run of Q3 Ricciardo snatched pole position to lead a one-two for Red Bull.

Championship rivals Lewis Hamilton and Sebastian Vettel share the second row of the grid, followed by their team mates.

The Red Bull and Ferrari drivers needed just a single run for each of their drivers to secure a place in Q2. This was despite the track improving quickly at the end of the session, which allowed the Force India pair to split Vettel from Raikkonen.

Mercedes also did a single run on the softer hyper-soft tyre, but began the session on the harder ultra-softs. After switching to the softer tyres Bottas set the best time of Q1 – and a new track record – lapping the circuit in 1’15.580.

Heading into the final minutes of running Fernando Alonso was under pressure. A lurid snap wide at turn 11 on his first run meant his lap time was deleted. He was among the first to start his final run and briefly leapt to seventh place with a clean lap, and despite slipping down the order stayed safe to reach Q2 for the first time in four races.

Team mate Stoffel Vandoorne, however, was a tenth of a second behind his team mate which was enough for him to miss the cut. Neither Williams driver ever looked like getting through, and both Haas drivers dropped out as they had last year.

It was a close thing for Romain Grosjean, however. He was within five hundredths of a second of beating Charles Leclerc to the final place in Q2 after the Sauber driver made a mistake in the middle sector of his fastest lap.

The hyper-soft tyres had fallen apart after a few laps during the heat of Friday practice so few drivers were willing to risk starting the race on them. Sure Red Bull, Ferrari and Mercedes all sent their drivers out on ultra-softs.

Force India too were minded to avoid the hyper-softs. Sergio Perez and Esteban Ocon joined the track on super-softs but could only manage 12th and 13th. And one of the drivers behind them was Pierre Gasly, whose 20-place grid penalty meant he had no reason to run at all.

So for the final runs Force India switched to the ultra-softs, the front-runners returned to the track on hyper-softs to cover themselves and the remaining runners put on fresh sets of hyper-softs too.

Esteban Ocon got himself up to 11th, putting Alonso’s McLaren between himself and Sergio Perez. Brendon Hartley ran wide at turn 12 and ended up 14th. Renault and Sauber kept their places in the lower reaches of the top 10, while none of the front-runners needed to improve their times, ensuring they will all start on ultra-softs.

Ferrari were quick in the first sector. Vettel thundered down the long straight at the Autodromo Hermanos Rodriguez and was nearly three-tenths of a second quicker than anyone besides his team mate. He clung to that advantage as best he could over the rest of the lap.

Hamilton came close to beating him, setting the fastest times in the second and third sectors but ending up five hundredths of a second shy of his championship rival.

Verstappen had been consistently the quickest driver in the final sector, but Hamilton had found a way to keep his tyres alive until the end of the lap, and around the final corners the Red Bull was only fractionally quicker. It was enough, however, to tip the Red Bull ahead – by almost two-tenths of a second at the chequered flag. Ricciardo slotted in fourth ahead of Bottas and Raikkonen.

When the final runs began it seemed no one could find a way to improve. Neither Ferrari driver found any further time and nor did Verstappen, who had led all three practice sessions as well as Q1.

But Ricciardo had something up his sleeve. He entered the final sector fractionally down on Verstappen, but took four-hundredths off his team mate in the final part of the lap to grab pole position by 0.026 seconds.