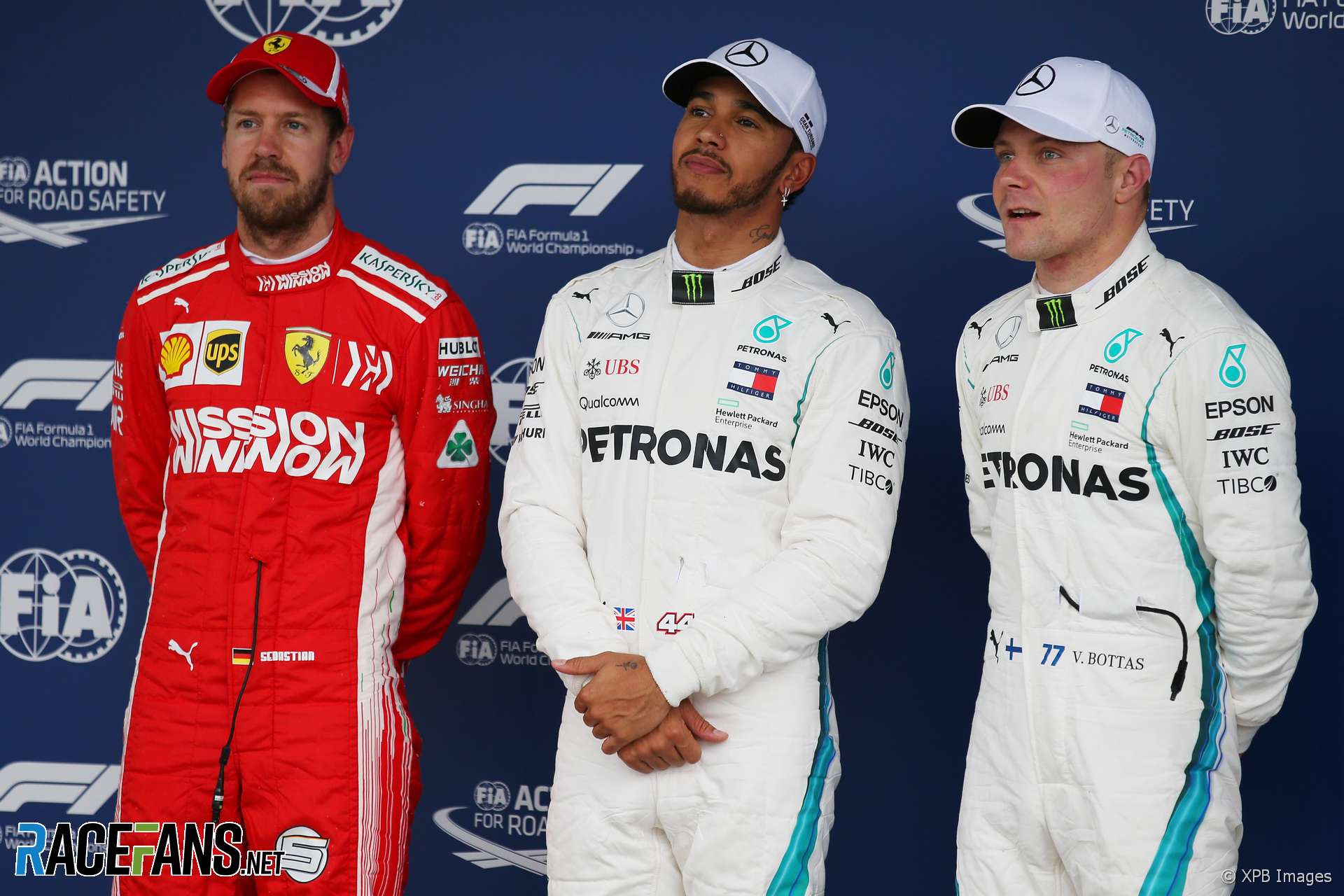 Lewis Hamilton broke the Interlagos track record as he claimed pole position for the Brazilian Grand Prix ahead of rival Sebastian Vettel.

But the talk of the session was of incidents involving both drivers including one in which Vettel was accused of breaking the FIA’s weighbridge scales – for which he is under investigation.

The skies darkened as the qualifying hour approached. The threat of rain had risen from 40% to 60% since the end of final practice, and a shower in the latter stages of Q1 shaped the outcome of the session.

The difference between lap times on the short Interlagos track was miniscule. While Max Verstappen headed Q1 on a 1’08.205, the next five drivers were all on a 1’08.4. These were the two Ferraris – who set identical times to within a thousandth of a second – the Mercedes pair and, unexpectedly, Kevin Magnussen’s Haas.

The same scenario was repeated lower down the timing screens and made the difference between who reached Q2 and who didn’t almost imperceptibly slim. Five drivers ended the session on a 1’09.2 including the Force India pair. Esteban Ocon only narrowly made it through after locking a wheel at Bido de Pato on his final run.

The rain arrived in the final minutes and scuppered several drivers’ efforts to reach Q2. Carlos Sainz Jnr got within five-thousandths of a second of knocking Ocon out but made a rare departure in the first round.

Sergey Sirotkin was on the right side of the 1’09.2 divide but Brendon Hartley dropped out, two-tenths slower than team mate Pierre Gasly. Lance Stroll and, inevitably, the McLaren pair completed those who dropped out.

The rain lingered into Q2 and left drivers hedging their bets on which tyres to use. Ferrari opted for softs, giving them the chance to start the race on the preferable tyre compound, but made the change late.

There was drama as Vettel was summoned, at random, to the weigh bridge, at an inconvenient moment. The Ferrari driver drove onto the scales under his car’s own power, in violation of FIA protocol, and drove off again afterwards. The technical delegate Jo Bauer accused Vettel of destroying their weighing equipment by doing this and he is under investigation by the stewards.

That wasn’t the end of the controversy. Having made it into Q2, Sirotkin had a near-miss with the newly-minted world champion. Nearing the end of a lap, the Williams driver came upon Hamilton at the approach to Juncao.

Hamilton, going considerably slower than the Williams on the racing line, dodged left as Sirotkin approached. But the Williams driver was already taking avoiding action and ended up on the grass as he passed the Mercedes.

It wasn’t the only run-in with one of his rivals for Hamilton. Kimi Raikkonen had to swerve around the Mercedes on the Reta Oposta back straight when he too caught Hamilton suddenly.

While all this was going on, Charles Leclerc had seemingly missed his chance to claim a place in Q3. The Sauber driver ran wide at turn two as the rain fell, and with track conditions deteriorating his hopes of reaching the final 10 looked to be over.

But Leclerc persisted, and with a superb final effort including a flying final sector, he dislodged Magnussen’s Haas from the final top 10 spot. Magnussen joined Sirotkin, Nico Hulkenberg and the Force India pair who all failed to make the cut.

After an intense and unpredictable Q2, the final part of qualifying was much more straightforward. While doubt hung over the status of Vettel and Hamilton following their earlier incidents, the former championship contenders fought as closely as ever over pole position.

The first runs left Hamilton ahead but tantalisingly within reach for Vettel, the pair both setting 1’07.3s. But with their final efforts Hamilton was the only one who found more – fractionally – establishing a new track record with a lap of 1’07.281.

Their team mates lined up behind them in the same order, each within two-tenths of a second of pole, and followed by the Red Bulls in their customary fifth and sixth places. However Daniel Ricciardo’s penalty means Marcus Ericsson, the quickest of the midfield drivers, will be promoted to sixth place.