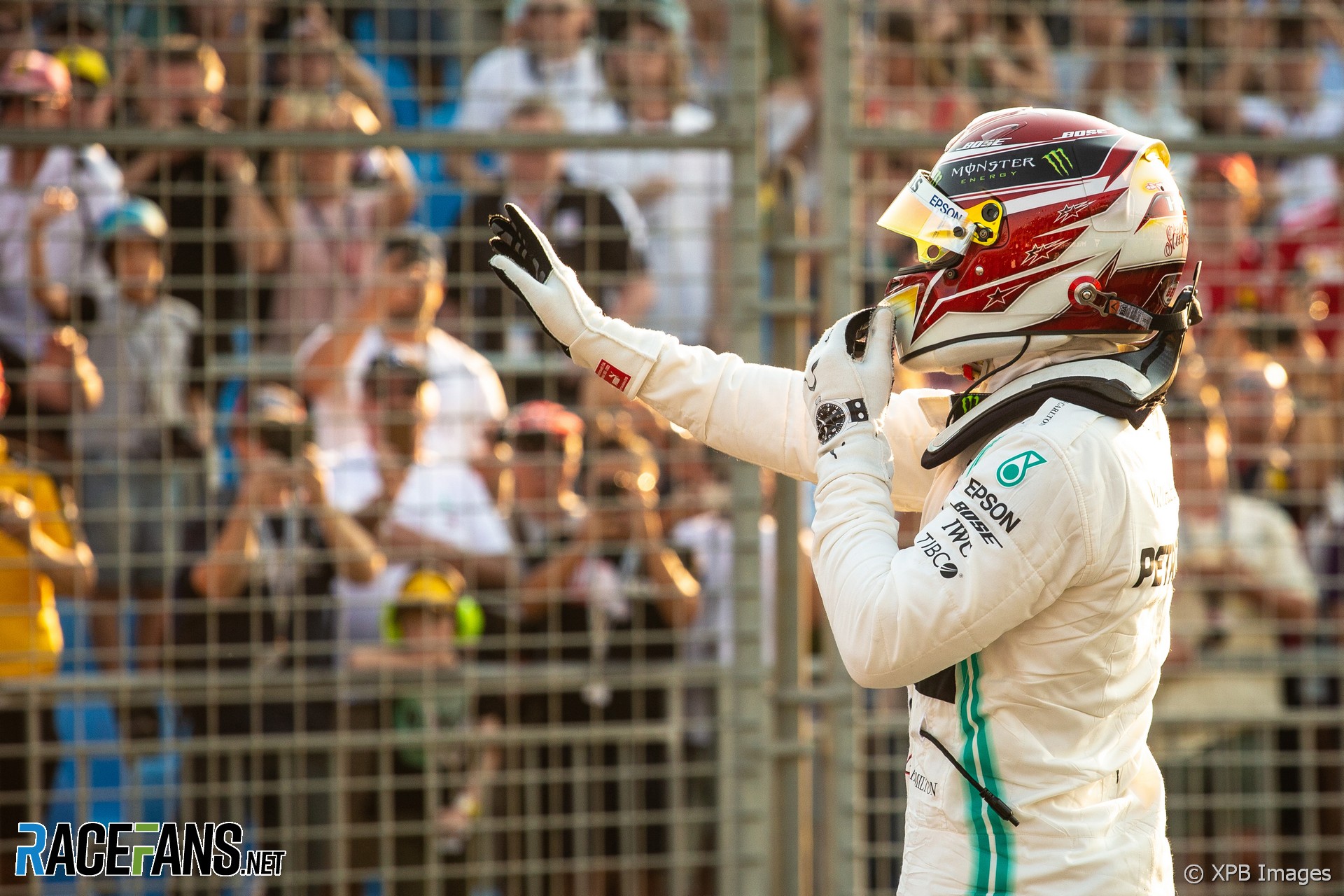 Lewis Hamilton claimed pole position for the sixth year in a row for the Australian Grand Prix.

The Mercedes driver took his eighth pole at the Albert Park circuit by seeing off a challenge from team mate Valtteri Bottas in the final phase of qualifying, setting a new track record-breaking lap as he did.

There was little surprise about the identity of the first two drivers who failed to make the cut for Q2. Neither Williams driver ever looked like lifting themselves up from the bottom two places.

Rookie George Russell at least managed to distinguish himself by decisively out-qualifying Robert Kubica, who had a torrid day. Having already hit the pit wall in final practice, he clouted the barrier at turn 10 on his final run and picked up a puncture.

As Kubica limped back in he was caught by Carlos Sainz Jnr, who blamed him for costing him time in the final sector, which saw the McLaren driver drop out in 18th. Meanwhile his team mate Lando Norris produced two superb laps and grabbed a spot in Q2.

The Ferrari drivers were the only ones to use the harder medium compound tyres in the first phase of qualifying, and of them only Sebastian Vettel was quick enough on them to secure his place in Q2. Charles Leclerc accompanied him after switching to soft tyres.

Pierre Gasly also wasn’t quick enough on his first run to secure a place in the next part of qualifying. However Red Bull did not send him out for another run, and as others improved their times he dropped out.

He was joined by Lance Stroll, who had been quick during practice, but blamed Romain Grosjean for holding him up in Q1. “The Grosjean incident cost us that place,” Stroll was told on the radio. “I understand he was on an out-lap and he couldn’t do a lap because they left too late to do a lap.” Grosjean was told to “push now” on his radio but replied “too late”.

Both Renault drivers came within a tenth of a second of reaching Q3 but were thwarted in the final moments of the second session. Sergio Perez’s last-gasp effort consigned Nico Hulkenberg to elimination along with Daniel Ricciardo.

The two Toro Rosso drivers dropped out as well. Alexander Albon out-qualified Daniil Kvyat on his debut, and reckoned he would have reached the final 10 if he hadn’t hit traffic at the end of the session.

They were separated by Antonio Giovinazzi, who had headed team mate Kimi Raikkonen in Q1, but fell behind at this crucial stage.

However another stunning lap by Lando Norris saw the McLaren driver claim a place in the final 10. Like Perez, he left his team mate behind in Q1.

Vettel made it into Q3 but not without some drama. He ran wide at the exit of turn 12 and bumped through the grass, but after inspecting his car Ferrari said it wasn’t damaged.

[mpuzweeler01]First blood went to Valtteri Bottas when the first runs were complete in the shoot-out for pole position. Hamilton got a little too greedy at turn one, ran wide, and lost four-tenths of a second. That was the difference between the pair of them at the finishing line.

Vettel and Leclerc trailed them, the Ferrari pair six-tenths of a second behind initially, followed by the sole Red Bull of Verstappen.

The pole position shoot-out came down to the two Mercedes drivers, but Bottas had nothing left up his sleeve. Hamilton hit back in style, clinching pole with a record time of 1’20.486.

With his final effort, Verstrappen split the Ferraris to put his Red Bull on the second row of the grid, 13 places ahead of his new team mate. The Haas pair took sixth and seventhm leading the midfield pack.

Norris concluded an impressive debut by beating Kimi Raikkonen to eighth on the grid by a hundredth of a second. Sergio Perez completed the top 10.