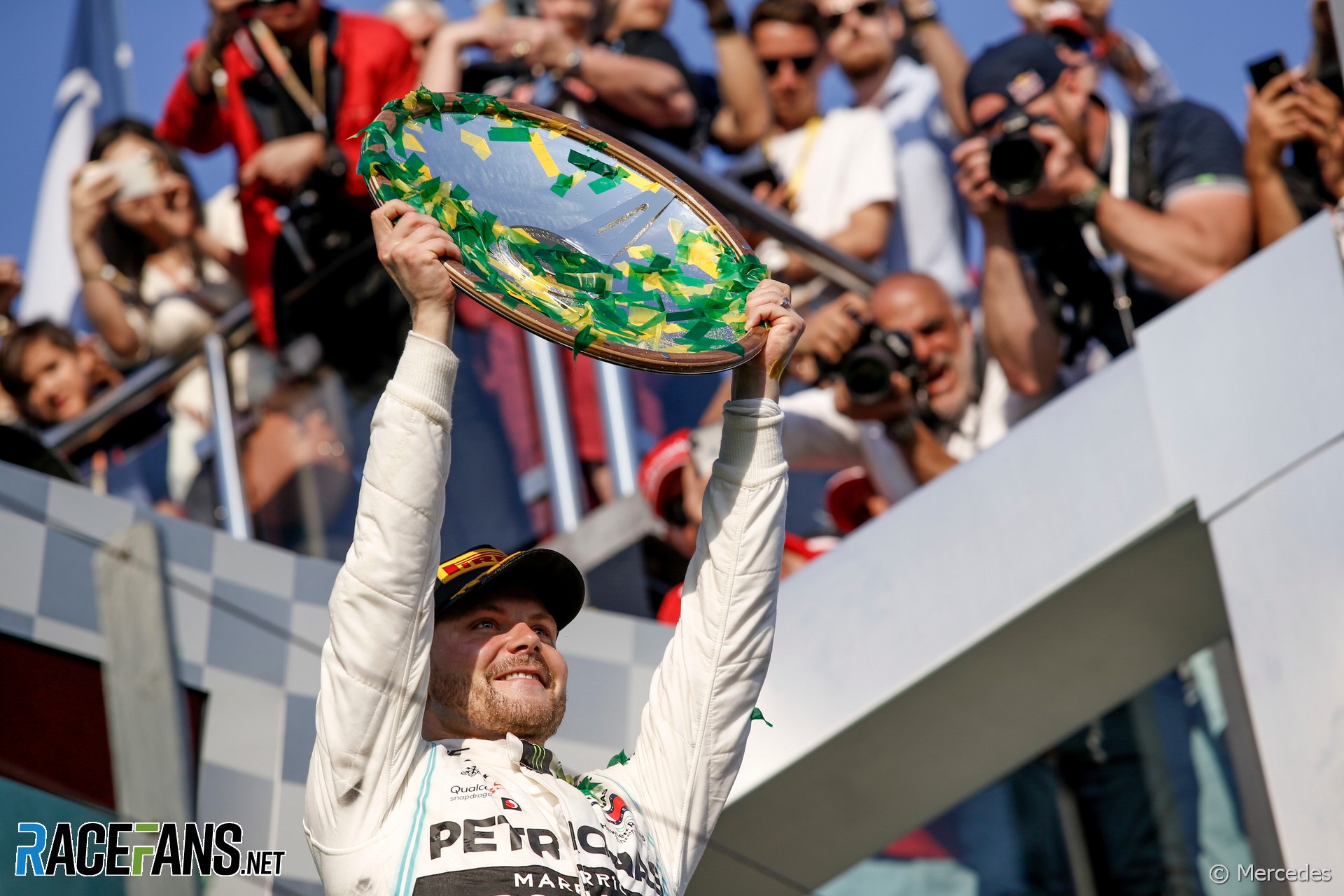 Valtteri Bottas became the first driver to score 26 points for a race win last weekend, but that’s not the most he’s ever scored in a grand prix.

Bottas achieved this by becoming the first recipient of a bonus point for fastest lap in 60 years. The last driver to do so was Maurice Trintignant, who lapped Sebring in three minutes and five seconds in his Rob Walker-run Cooper T51 during the 1959 United States Grand Prix.

He began the season in style, bouncing back from a win-less 2018 to lead team mate Hamilton home by 20.8 seconds. That’s the biggest winning margin for any driver since Nico Rosberg’s 2016 Russian Grand Prix victory, where Hamilton also finished second.

Bottas now leads the championship for the first time in his career. He is the 60th different driver to do so. His fourth win put him level with two other drivers who led the championship but never won it – Eddie Irvine and Bruce McLaren – plus Dan Gurney.

For the fourth year in a row, Hamilton started the season-opening race from pole position but didn’t win it. This was his sixth Australian Grand Prix pole position in a row, one shy of Ayrton Senna’s record for most consecutive pole positions at the same venue, which he achieved at Imola between 1985 and 1991.

This is also the 13th consecutive year Hamilton has set a pole position, which put him in a tie with Schumacher for the all-time record.

With his 84th pole position, Hamilton now has as many as every other driver on the grid put together. Vettel has 55, Kimi Raikkonen 18, Bottas six, Daniel Ricciardo three and Nico Hulkenberg and Robert Kubica one each.

Ominously for Mercedes’ rivals, their 0.704s advantage over the next-quickest car in qualifying was larger than anything they had throughout the whole of last season. However, Mercedes were also stronger at Albert Park last year than they were at any other track.

Honda began their fifth year back in F1 as an engine supplier by claiming their first podium for more than a decade. Max Verstappen’s third place was the first for the Japanese engine builder since Rubens Barrichello came third in the 2008 British Grand Prix. Honda also led a race for the first time since Barrichello headed the field at the Circuit Gilles Villeneuve the same year.

Verstappen’s points finish was his 10th in a row, a personal best. Also in the points at Albert Park were F1’s two ‘new’ teams for 2019: Racing Point and Alfa Romeo. The latter officially scored their first points since Riccardo Patrese finished sixth in the 1984 European Grand Prix (note he also finished ninth at the same race the following year, but points were only awarded to the top six).

One Schumacher record which remains untouched 15 years after he set it is the Albert Park lap record. Schumacher set a 1’24.125 in his Ferrari F2004, yet despite Hamilton establishing a new track record on Saturday (1’20.486) and a point being offered for fastest lap, the quickest time seen in the race was Bottas’s 1’25.580.

Kubica’s 3,045-day wait to start a grand prix since his last one is the fourth-longest in F1 history. Jan Lammers holds the record having gone 3,767 days between consecutive starts in 1982 and 1992.

Three drivers made their F1 debuts. Alexander Albon races under a Thai licence, making him the second driver from that country to start a race since Prince Birabongse Bhanudej Bhanubandh (aka ‘B Bira’), who last raced 65 years ago. Albon, who has a Thai mother and British father, was born in London in 1996, where his predecessor died 11 years earlier.

Of the other newcomers, Lando Norris’s eighth place on the grid is the best starting position achieved by a debutant since his team mate Carlos Sainz Jnr took seventh for Toro Rosso four years ago. George Russell had a tougher time in the Williams, but holds the distinction of being the only driver to start an F1 race with the number 63. It was used by some drivers in the Indianapolis 500 when it counted towards the world championship, but the race was never run to F1 rules.

Have you spotted any other interesting stats and facts from the Australian Grand Prix? Share them in the comments.