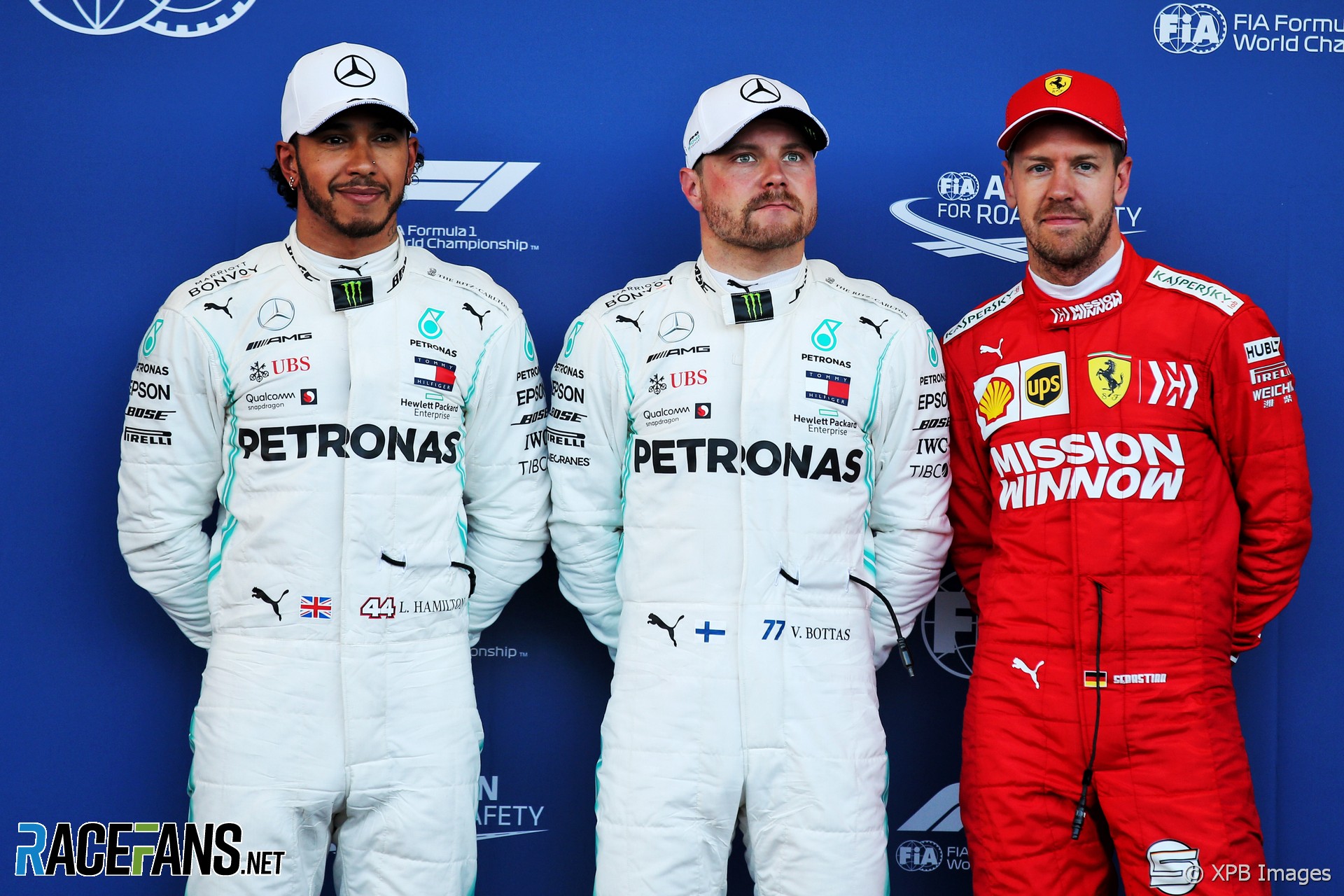 Mercedes locked out the front row of the grid for the Azerbaijan Grand Prix after practice pace-setter Charles Leclerc crashed out during qualifying.

Leclerc’s demise in the second round of qualifying left Sebastian Vettel as the team’s only representative running in the top 10 shoot-out. He was unable to stop Valtteri Bottas claiming his second pole position of the season, followed by Lewis Hamilton.

Pierre Gasly was the surprise name on top of the times at the end of the first stage of qualifying. The Red Bull driver, who will start the race from the pit lane, set the quickest time in sector one and picked up a huge slipstream from Lance Stroll’s Racing Point at the end of the lap to lead Q1.

That displaced practice pace-setter Charles Leclerc from the top of the times. Lewis Hamilton was second-fastest, signalling Mercedes’ potential by getting within three-tenths of a second of the Ferrari.

The fight to escape the bottom five was as fraught as ever and it was decided when one of the contestants, Robert Kubica, hit the wall. The Williams driver got very greedy with the entry kerb at turn eight, clipped the wall, and made heavy contact with the barrier on the outside. It left Williams with another car to repair, assuming they have sufficient spares after George Russell’s drain cover strike yesterday.

Kubica hit the wall just as Daniel Ricciardo was crossing the line to complete a lap which lifted him out of the bottom five and into Q2. That was bad news for Stroll, who slipped into Q1 and was eliminated in the first round for the fourth time in as many races.

Ricciardo was the only Renault to reach Q2 as Nico Hulkenberg also dropped out in the first round. Romain Grosjean, who also completed his final lap moments before the red flag appeared, failed to make the cut too.

The marshals at turn eight worked quickly to repair the barrier Kubica destroyed, but it still took around 20 minutes before Q2 could be started.

When it did, only Ferrari sent their drivers out on medium tyres at the start of Q2. It was a decision they swiftly regretted.

Turn eight proved the danger zone again. Vettel had a big twitch as he turned into the old city, but caught it and kept his car out of the barriers. His team mate didn’t get away with it: He locked, up and thumped the barrier nose first.

The session was red-flagged with seven-and-a-half minutes still on the clock. Once it resumed, Leclerc’s medium-tyre time proved quick enough to secure him a place in Q3.

Among those who were unable to beat him time were Kevin Magnussen and Ricciardo, whose team mates had gone out in Q1. Gasly did not set a time, meaning he will be able to start the race on new tyres.

Both Toro Rosso drivers clipped the walls but only one of them – Daniil Kvyat – made it into Q3. He left team mate Alexander Albon behind, WHile Lando Norris did the same with respect to McLaren team mate Carlos Sainz Jnr.

The final round of Q3 began with just nine out of 10 drivers running. With Ferrari compromised, Mercedes seized the opportunity to pounce.

Hamilton led the way initially, moving to the head of the times with his first run. By now the session had been running for almost an hour longer than planned, and while the track surface was offering more grip it was also cooling, making gains harder to find.

Vettel didn’t involved himself in the hectic tussle for track position on the final run. That appeared to pay off at first as he mounted a competitive run through the opening sectors, but at the run to the flag he fell short of Hamilton’s time.

Worse was to come for the Ferrari driver. Bottas, aided by the slipstream of cars ahead of him on the run to the finishing line, leapt into the top spot with his final run. Hamilton might have beaten his team mate too, but ended up five-hundredths shy after losing almost three-tenths of a second in the first sector alone.

Verstappen slotted in fourth while Sergio Perez sustained his reputation as a master of Baku by putting his Racing Point in fifth position ahead of Kvyat and Norris.

Antonio Giovinazzi out-qualified his Alfa Romeo team mate Kimi Raikkonen, but his 10-placegrid penalty will drop him to the back of the field.

It will also promote Leclerc to ninth on the grid, though he more than anyone knows he had the chance to start eight places higher.