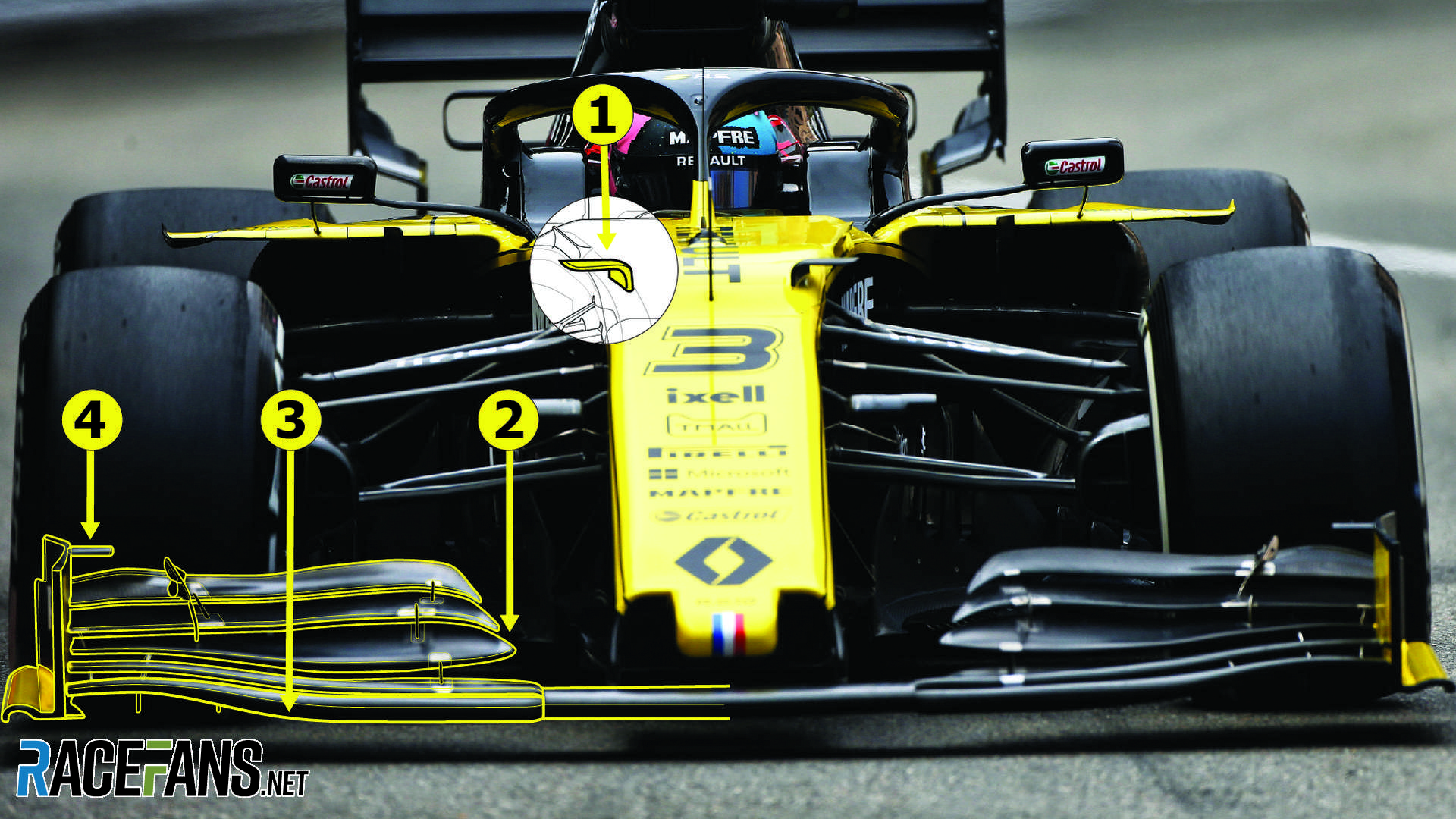 Eight-tenths of a second covered 12 cars in the midfield at the end of Thursday practice. Here’s what three of the teams are doing to wring every last thousandth from their chassis.

Renault have been seen on the Monegasque streets with a couple of new and old updates, with the nose sporting new fins and one of the front wing options, being the updated version from Spain. On top of the nose there are a pair of new fins (1), These are similar to those introduced by Mercedes in the second week of testing, but are not new to Renault. The team ran with similar devices back in 2006.

These fins sit in the wedge-shaped free area, where the maximum chassis height slopes down to meet the nose. Their function is to create ‘downwash’, as there is a rising airflow coming up over the nose and front suspension, so these devices turn that airflow downwards and direct it towards the sidepods. While this means the fins create a little lift (negative downforce), the overall effect is better for the car to create downforce, which offsets their lift.

The updated front wing that appeared in Spain and caused problems for Hulkenberg in qualifying is being run again in Monaco.

There are a couple of key changes to the new-spec front wing. Firstly, the inner wing tips (2) are different, their tips are raised higher away from the wing’s mainplane. The function of these wing tips is to create the Y250 vortex, that passes along the flanks of the car to push the front tyre awake from the car. These tips being higher means the Y250 vortex they produce will also be a little higher, so the change will affect how the air flows through the bargeboards and out around the rear of the car.

Secondly the wing’s leading edge profile is different, the old wing stepped upwards from the neutral centre section of wing, which placed the wing higher off the ground. Now the wing stays much lower to the ground for more of its span, only kicking up further outboard (3). This places more of the wing closer to the track, for greater ground effect. This should make the wing more powerful, but perhaps at the cost of some sensitivity as the car pitches and rolls through corners.

One interesting feature of the Renault front wing endplate is the small horizontal fin (4) towards the endplate’s trailing edge. This fin house a tiny tyre temperature sensor, other teams have similar solutions, but their larger sensor needs to be mounted in a bigger rounded housing. Although the front wing rules for this year sought to rid the wings of extraneous fins, the tyre temperature sensor was given exemption, albeit with tight controls on what size and shape is allowed. But although the fin is there largely to monitor the tyres, you can be sure that the shape and positioning are doing something to aid the aero too.

The Haas approach to Monaco is typical of most teams, this year the rear wing is maxed out on angle of attack, there is a new wing on rear wing mountings and also a T-wing. This new wing profile sits between the two rear wing mounting pylons (1), in the limited place allowed for bodywork above the exhausts.

It’s effectively a ‘monkey seat winglet’, working with the top rear wing and exhaust flow to create downforce. The older, large monkey seat wings have largely been outlawed, by limiting the scope for winglets in the middle of the rear wing assembly.

The T-wing (2) is up-scaled from the normal version with extra downforce being created directly by its three aerofoils. This is formed with one upper profile and two lower ones.

As you can get so close to the cars in the Monaco pitlane, a small detail on the Ferrari power unit is visible. All the Ferrari-engined cars sport similar packaging for the oil breather. The engine oil breather (3) has been re-positioned from last year and is now just below the exhausts. Last year this exited under the tail light and was conspicuous as it vented a lot of oil vapour. The re-positioning of the vent along with repackaging of the oil tank and breather system, sees a lot less visible oil mist escaping from the outlet.

Oil mist is created by the churning of the oil inside the engine and its subsequent de-aeration. Before 2018 the oil mist was directed back into the engine airbox to be mixed with incoming air and burnt inside the engine. This led to the accusation of performance enhancing oil burning, so the breather was rerouted directly out the back of the car to prevent any advantage being gained. This now puts the Ferrari engine breather in a similar position to the rest of the grid.

Following the F1 aerodynamic motto that ‘more is better’, Racing Point appeared with a T-wing that has grown to four elements. Within the small space allowed for the wing, the team have managed to create a cascade of two bi-plane winglets.

These four aerofoils appear to be for creating downforce directly, rather than shaping the airflow to the rear wing. They may not be the most efficient means of adding downforce, as they will carry a drag penalty, but for Monaco more downforce is more beneficial than the penalty of a little extra drag.

3 comments on “Analysis: The hunt for downforce in F1’s close midfield”