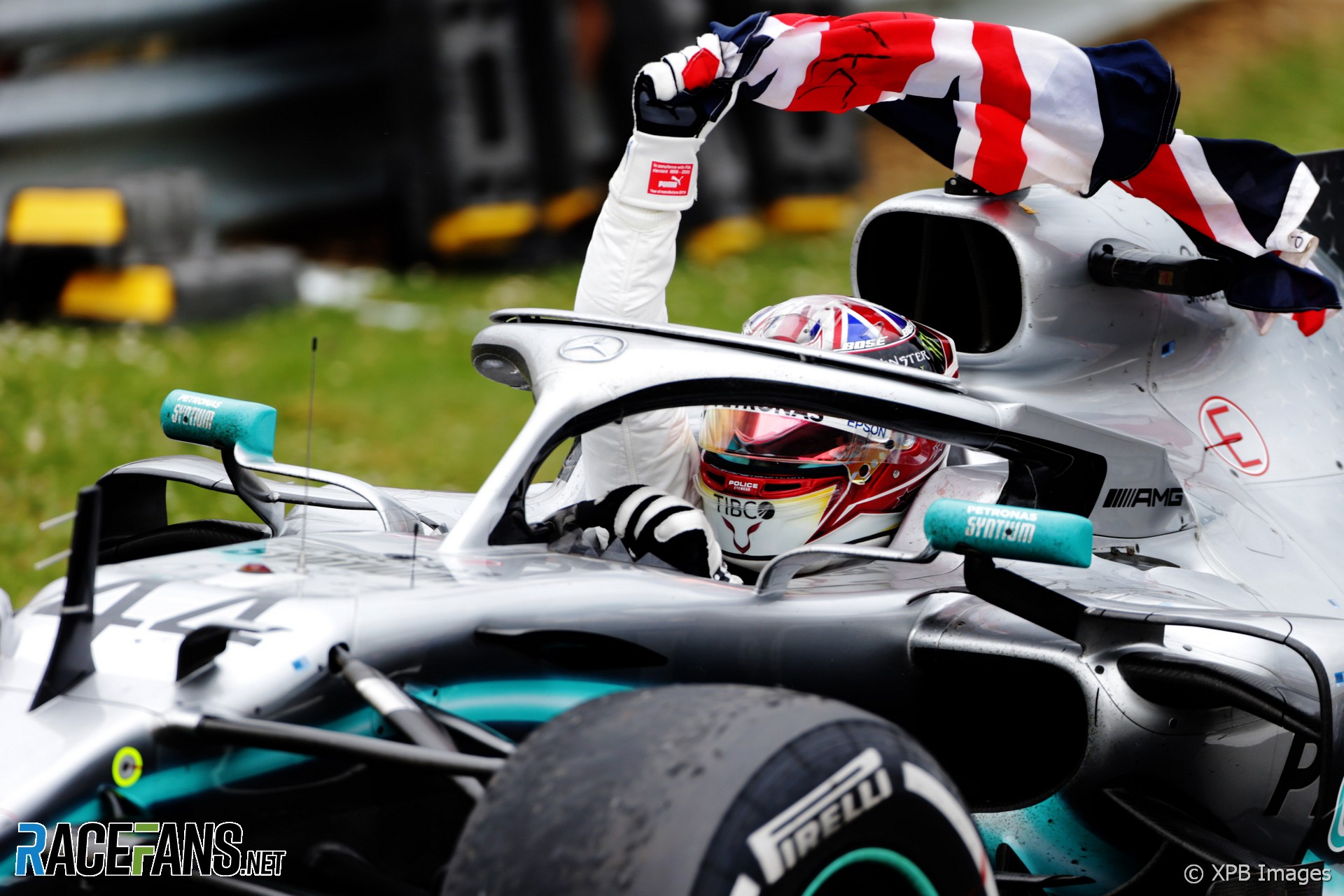 The British Grand Prix was a race to sit back and enjoy rather than forensically deconstruct. Or, at least, one to take time to fully appreciate before delving into the data to work out why everyone finished where they did.

Yes, there was a Safety Car and a few pit stops and other distractions. But mostly this was about the world’s best drivers racing the world’s fastest cars around one of the world’s greatest loops of asphalt.

The joyous news that we’re set for five more years at Silverstone capped a superb weekend for Formula 1.

Charles Leclerc didn’t find enough purchase from his soft tyres at the start to get in among the Mercedes. Instead, the silver cars set about fighting each other, while Leclerc led a chasing pack comprising the two Ferraris and Red Bulls.

Lewis Hamilton, who’d been denied a fifth consecutive pole position in his backyard by a mere six-thousandths of a second, was on his team mate’s tail from the off. After qualifying the world champion said he’d found a race set-up he liked and didn’t want to deviate too far from it. And boy, did it show.

On a track with few slow corners and a fresh coating of a new, custom-made Tarmac mix, the 2019 cars attacked the course and each other with incredible commitment. But few more so than Hamilton, who relentlessly hounded Valtteri Bottas through the opening laps.

When he grabbed a DRS-boosted run down the Wellington Straight and lunged for the inside line on his team mate at Brooklands, it looked like the job was done. But Bottas found ample grip on the outside and clung on, edging Hamilton wide at Luffield. The world champion came out of the corner ahead, Bottas tucked under his rear wing.

Approaching the super-fast Copse Bottas swung to the inside and Hamilton, showing perhaps an excess of fairness to his team mate, ceded the inside line. Bottas was quick enough on the short straight to claim the corner, obliging Hamilton to accept second place. But such was his pace it was surely an inevitability that the order would eventually be reversed.

That eventually came about as a result of the Safety Car, which was triggered between Hamilton and Bottas’s first pit stops. Bottas, lacking data on the hard tyres, opted for a second set of mediums when he came in on lap 16, boxing himself into a two-stop strategy. Others had been content to take the gamble: Pierre Gasly prompted the rush for the pits when he traded his mediums for hards four laps earlier.

With Bottas’s strategy now obvious, Hamilton extended his first stint. He would have gone further than lap 20 had Antonio Giovinazzi not spun into the Vale gravel trap. As a tractor needed to cross the pit lane entrance to retrieve the car, the Safety Car was summoned, and Hamilton’s path to the lead was eased. But, as he pointed out afterwards, without it he would have just put the hard tyres on and waited for his team mate to make the inevitable extra pit stop.

But if the Safety Car deprived us of a fight between the Mercedes drivers, it injected further drama into the best battle of the race: Max Verstappen versus Charles Leclerc, round two.

“I think he was a little bit sore still from Austria so he was defending really hard,” quipped Verstappen after the race. “But it’s fine, I’m all for that.”

There certainly was a much harder edge to Leclerc’s driving as he and Verstappen thrilled Silverstone with a no-holds barred scrap for supremacy. But he also produced the kind of opportunistic moves his rival would have been proud of.

Leclerc’s soft tyres faded quickly: He never got out of range of Verstappen’s DRS at the start of the race. But on lap 10 the gloves truly came off. The Red Bull got a run on the Hangar straight and Leclerc moved late and decisively to cut him off – a response which looked like it was straight out of the Verstappen textbook. It set the tone for what was to follow.

Leclerc dawdled at the apex of The Loop, then ran Verstappen out wide (perhaps with a smirk as he remembered the Red Bull Ring), which brought Sebastian Vettel into the fight. Verstappen closed him down hard, covering the inside line approaching Brooklands and turning in early to repel one Ferrari before going after the other one again.

Vettel then fell back into the clutches of Gasly, who passed him with ease going into Village. It looked toothless from Vettel, but he knew his best chance of profiting was to keep his soft tyres alive.

Gasly pitted at the end of that lap which triggered the pit stop sequence for the leaders. Leclerc came in the next time around and Verstappen, unusually, followed him. If this was a vote of confidence in his pit crew they responded superbly, getting Verstappen out a nose ahead of Leclerc.

But Leclerc was in no mood to give anything up. He grabbed the racing line at Village then threw his car for the inside at The Loop. It was never likely to stick, but it succeeded in spooking Verstappen into running wide, and now Leclerc had the inside line and with it the position.

His reward for that gem of an opportunistic pass should have been a place on the podium, but the Safety Car period made life much harder for him. First, it handed third place to Vettel, who had eked out his soft tyres to lap 20, and fourth place to Gasly. Furthermore, Ferrari didn’t want to risk losing track position, so left Leclerc out, only for Verstappen to come in and grab fresh tyres – a ploy both obvious and impossible to guard against.

When the race restarted Leclerc was chasing Verstappen, Gasly and Vettel. Leclerc got alongside Verstappen through the Vale chicane and briefly had the position but Verstappen, putting all four wheels wide at the run-off, stayed ahead. Surprisingly, the stewards ruled Verstappen’s move legal, and let them get on with it.

Red Bull swiftly ‘corrected’ the running order of their two drivers, pointing out to Gasly that the two cars were on “different strategies”. As neither had any further pit stops to make at this point, and both were running on hard tyres, that is a debatable point, but one Gasly conceded as soon as Christian Horner came on the radio and told him to pull over.

The final act came on lap 37. Verstappen, having tested Vettel’s defence on previous laps, cruised past him with DRS on the Hangar straight. but he ran slightly wide at Stowe and Vettel came back at him. Verstappen clung to the inside line at Vale – what else was he going to do – and Vettel clumsily ran into the back of him. After Leclerc had spent lap after lap fighting the 33 car cleanly but fairly, this was a dismal display of racecraft from the four-times champion.

However, it meant Leclerc ultimately prevailed in his fight with Verstappen. This was both in spite of and thanks to errors in the rest of the Ferrari team. Vettel was given a largely meaningless 10-second penalty for his blunder.

The circumstances of the race made Hamilton’s superiority less obvious than it might have been. The bonus point for fastest lap offered the chance to correct that. Bottas made his extra second pit stop – entirely unnecessary other than to satisfy the regulations – and put on a set of soft tyres. He reeled off a 1’27.406 on lap 47, well over a second faster than anything anyone else had done, and seemed on course for a damage-limiting extra point.

But Hamilton, who had turned down the option of an extra pit stop for softs to cover Bottas, liked the feel of his hard tyres. And his experience in France had shown him what was possible with a late push on old rubber.

As the final lap began he cranked the Mercedes up and savoured his final flying lap of Silverstone. He produced a 1’27.369 – a scant 0.037 seconds quicker than Bottas – and capped a perfect drive with the final extra point on offer.

The Safety Car period had consequences for the midfielders too. The likes of Lando Norris (11th) and Sergio Perez (17th) had hard luck stories to tell about how the timing of the Safety Car wrecked their afternoons.

A late second pit stop for hard tyres backfired for Norris. Perez had a problem with his steering wheel after the Safety Car period, couldn’t adjust his brake balance, and skidded into Nico Hulkenberg, costing him a place to Kimi Raikkonen. Again the stewards stayed their hands, creating a distinct impression they had been told to go easy on the drivers.

The Safety Car landed perfectly for Carlos Sainz Jnr, who made his sole pit stop and grabbed seventh place as a result. He led home Daniel Ricciardo, Raikkonen, Daniil Kvyat and Nico Hulkenberg.

The latter claimed the final points place from Alexander Albon with two laps to go. The Toro Rosso driver had to run a 39-lap stint on medium tyres, 10 laps longer than any other driver, as an electrical problem on his Honda power unit meant his mechanics couldn’t touch his car. He therefore slipped out of the points in the final laps, and his despondency cannot have been helped by his team telling him he now had to jump clear of his live car.

Norris took 11th place off him, while Lance Stroll was the leading Racing Point driver at the flag in 13th place. George Russell took 14th for Williams – the best result of the season so far for the team which won its first race at this grand prix 40 years ago.

Haas’s awful season continues to find more ways to go badly. Before the weekend began they suffered the ignominy of apparently being publicly dumped by title sponsor Rich Energy, amid an emerging internal battle over control of the company. Haas put a brave face on the situation.

Then Romain Grosjean and Kevin Magnussen blundered into each other at the start, leaving each with race-ending damage. Team principal Guenther Steiner, understandably, was furious, not least because Grosjean had been running the team’s Australia-specification aerodynamics which appeared to be generating some useful insight into why their upgraded car has been performing so poorly.

Mercedes back on form

The British Grand Prix confirmed the impression that Mercedes’ form in Austria was a blip. They romped to a one-two, Hamilton showing much the same kind of form he enjoyed in France.

Happily for Formula 1, the two races since that lifeless encounter at Paul Ricard have been immensely superior sporting spectacles. This is not to say all is rosy in the F1 garden, but it does show that given the right circumstances we can still get great races.

In the championship, however, the prospects of anyone not in silver overalls getting their hands on the silverware continues to fade. But when the racing is this good, it matters much less that the same two cars keep finishing first and second.