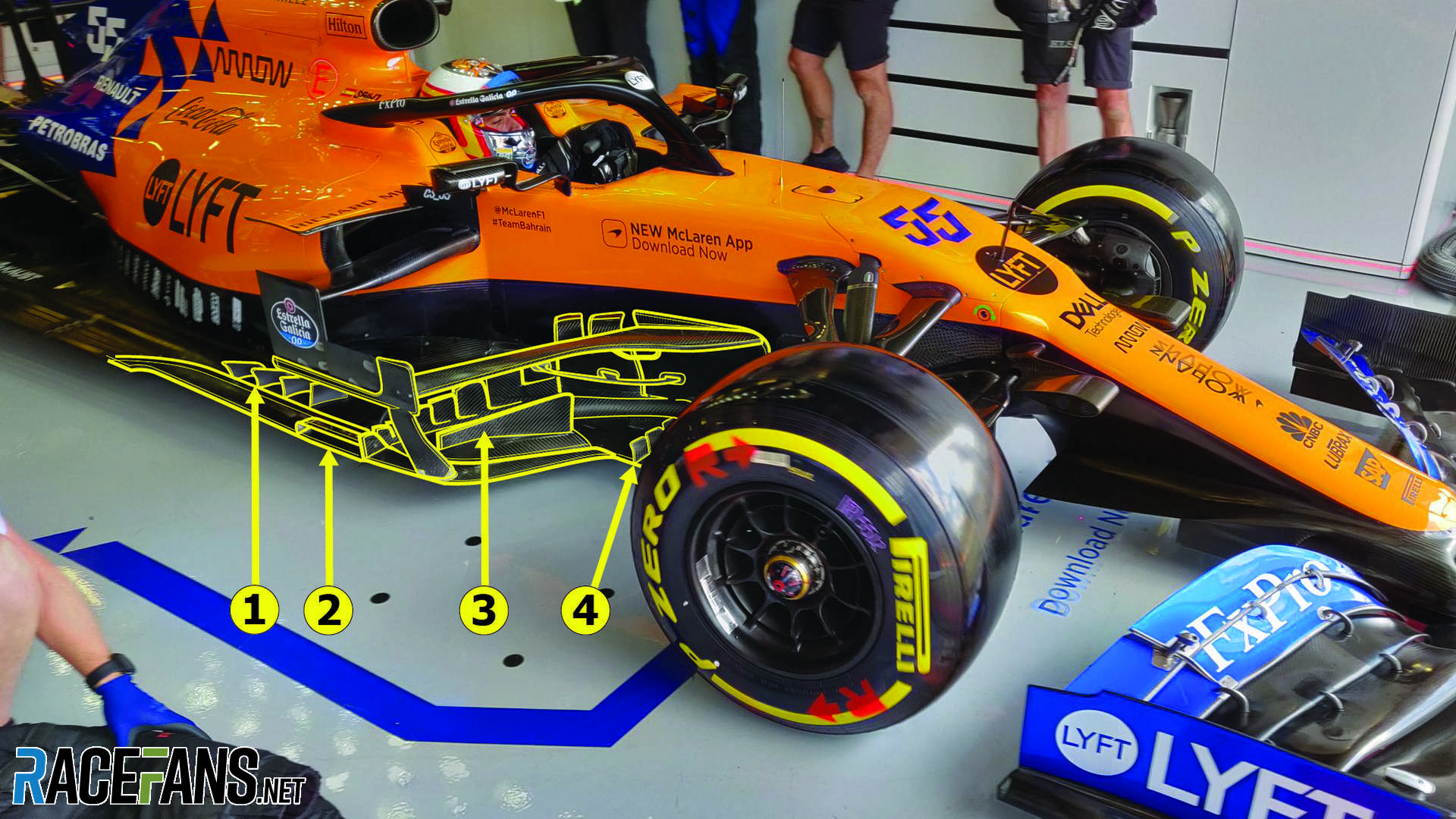 Three races ago, Renault had closed to within two points of McLaren in the battle for ‘best of the rest’ honours behind the top three teams – sometimes called the ‘Formula 1.5’ fight.

Since then McLaren has out-scored their engine supplier at each race, and has established a 21-point cushion over fifth place in the championship. This came about as the performance pendulum swung from Renault to McLaren during the course of the past half-dozen races:

McLaren has made steady progress with its MCL34, and at Silverstone brought another revision to its bargeboards. Based around their Spanish Grand Prix ‘mark two’ bargeboard update, the details around the main board were all updated.

Starting with the floor edge behind the bargeboard package, two variations were tried. One configuration which was tested but not raced features a series of four fins (1) added to the floor edge. These sat in the space behind the floor edge flap. The alternative design, which remained on the car for the full weekend, was a simple extension of the edge-flap. This used to be very short (2), but now extends about four times the original length to sit above the rolled edge to the floor below.

Within the main bargeboard area, the floor foot plates (3) were revised, the old format with two floor plates with a turning vane amounted above them has been replaced with a triple footplate set up without the vane.

Lastly the other main change was the series of vertical and horizontal fins (4) starting the bargeboards. To package the revised footplates, these are now narrower, with an extra vane leading the five vertical fins.

Elsewhere on the car the MCL34 featured small revisions to the two fences under the front wing, where the outermost fence has been shortened. The drivers split the testing of the various packages, which included flow-viz runs in the first practice session before settling on the updated bargeboards with the long edge flap and without the four fins.

Such hard work on the bargeboards is a follow-on from the Spanish GP update where the front wing philosophy switched from outboard-loaded to inboard-loaded. While this update has proven effective, the downside was a reduced airflow to the bargeboards, from the steeper inboard front wing shape. By pushing the bargeboard development in the way of this update, should help bring the lost performance back to the car.

Renault, meanwhile, have been working hard to improve the interaction between its chassis and Pirelli’s tyres – a problem several teams are experiencing. Renault did this using a combination of updates to the RS19 and experiments with its set-up.

Having tried to increase the downforce levels on the car in Austria with more wing angle, the car struggled far greater on the straights and hurt the lap times. This problem forcing the team to regress to a lesser downforce level that hurt its performance through the final four turns.

Time was spent in free practice testing different set up to try to find a better baseline from which to tackle tyre issues at future races.

Technical changes were limited at Silverstone, the key visual change being a revised front wing flap set up. In a similar fashion to a direction Toro Rosso followed earlier in the season, Renault extended the inner tips of the wing to create a stronger Y250 airflow. This change comprised all-new front wing flaps (1) that extended all the way up to the Y250 line (highlighted yellow). With a stronger Y250 vortex, the floor and rear wing should be more efficient, which should partially offset the issues seen in Austria.

The cape under nose vane (2) that was introduced in France is also evident (2), this device making use of the redundant space under the nose to enhance the function of the turning vanes and bargeboards downstream.

5 comments on “Analysis: The updates helping McLaren edge away from Renault in the ‘Formula 1.5’ fight”