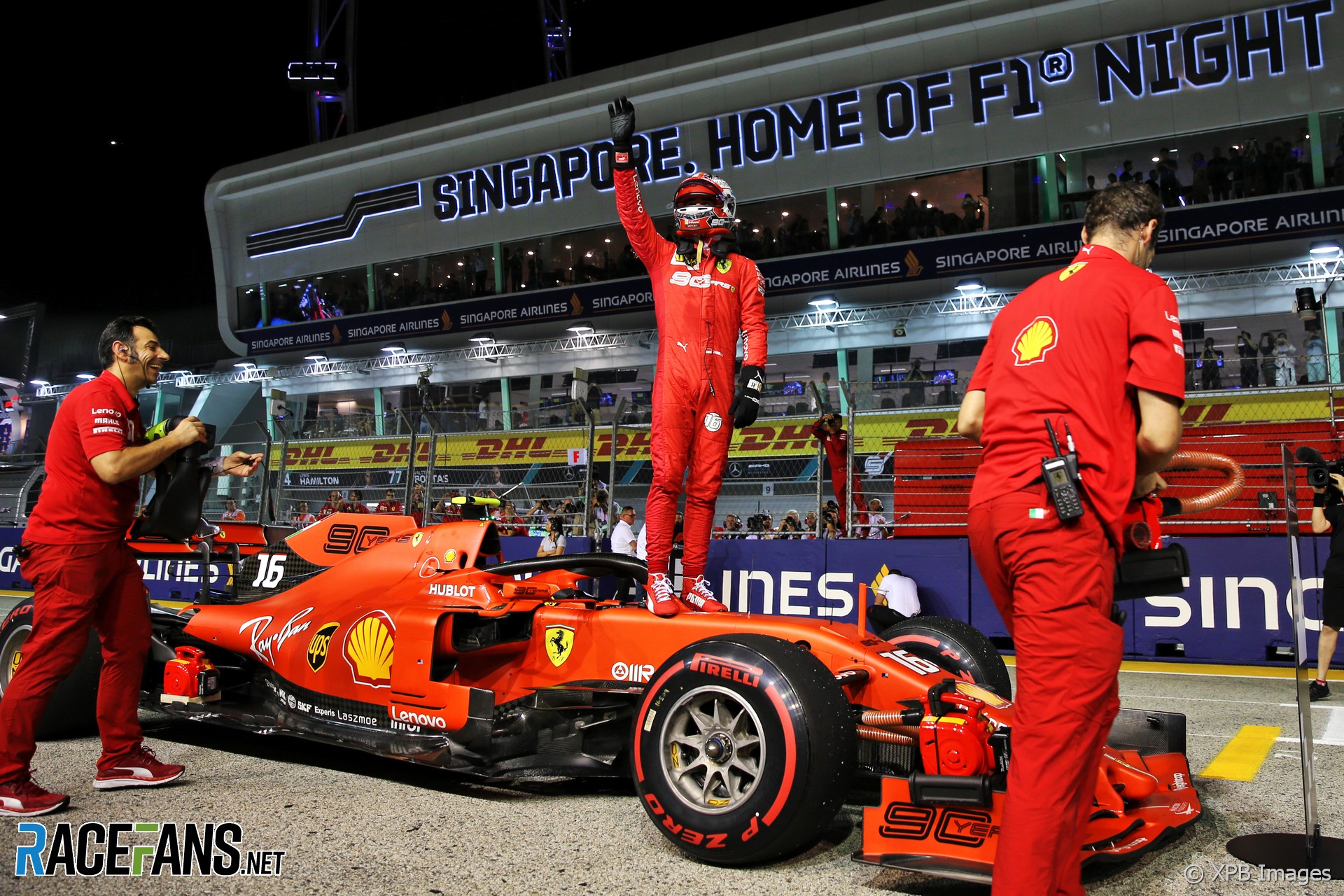 As described in yesterday’s practice analysis, there was little sign Ferrari had the pace to take pole position in Singapore.

Yesterday the quickest Ferrari was eight tenths of a second off the pace. But from his first lap in final practice it was clear Charles Leclerc had the pace to challenge for pole position.

For a while in qualifying it looked like we were going to get an all-Ferrari front row. In the end only Lewis Hamilton was able to split the two red cars.

“I think Ferrari’s shocked everyone really this weekend,” remarked Alexander Albon after qualifying. This certainly seemed to be the case.

Qualifying, however, was strongly influenced by who could get their out-laps perfect in order to hit the sweet spot which unlocked the best of the Pirelli tyres. Sebastian Vettel was practically the only driver to manage this on his first lap in Q3. The second time around Leclerc and Hamilton did it too, and beat him.

Hamilton, strikingly, swept past his team mate at the end of their out-laps, compromising Bottas’s run in the process, but helping to ensure he got onto the front row. The two Mercedes team mates have had a largely harmonious relationship so far, but Bottas was not impressed by his team mate’s tactics.

Hamilton was another driver who was surprised to see the red cars in the fight for pole position. “I don’t know where Ferrari picked up their pace today as this is potentially not one of their tracks,” he remarked, “but they did a great job.”

The crucial question now as far as the race is concerned is whether Ferrari’s one-lap performance will translate into decent pace over a race stint. But even if it doesn’t, Mercedes team principal Toto Wolff is still casting jealous glances in his rival’s direction.

“Obviously if you’re fast on one lap you’ve got to have the heat in the car and the tyres for this one lap and this is something that can bite you on a race distance,” he said.

“But having said that once you’re in front you have a decent opportunity in managing from there. So I’d rather be on board with a slightly compromised card than have every great race car but not be on pole.”

It’s clear what Wolff is driving at: Having parked one of their cars on pole position, Ferrari should be able to one-stop their way to victory by managing the pace early on at a track where overtaking is very difficult.

In past Singapore Grands Prix we’ve seen whichever team is chasing risk an extra pit stop late in the race in an attempt to chase down the leader. This was the tactic Hamilton used to win in Hungary.

Albon suspects there might be a chance for teams to do the same on Sunday. “I think the degradation is going to be quite high tomorrow,” he said. “Hopefully that opens up the strategy a bit and or there’s more than just the one stop from previous races.”

Will Leclerc take his third win in a row? Could Mercedes or Red Bull turn out to be stronger over a race distance?

Share your views on the Singapore Grand Prix in the comments.

15 comments on ““Ferrari’s shocked everyone”: Can Leclerc make it three-in-a-row?”