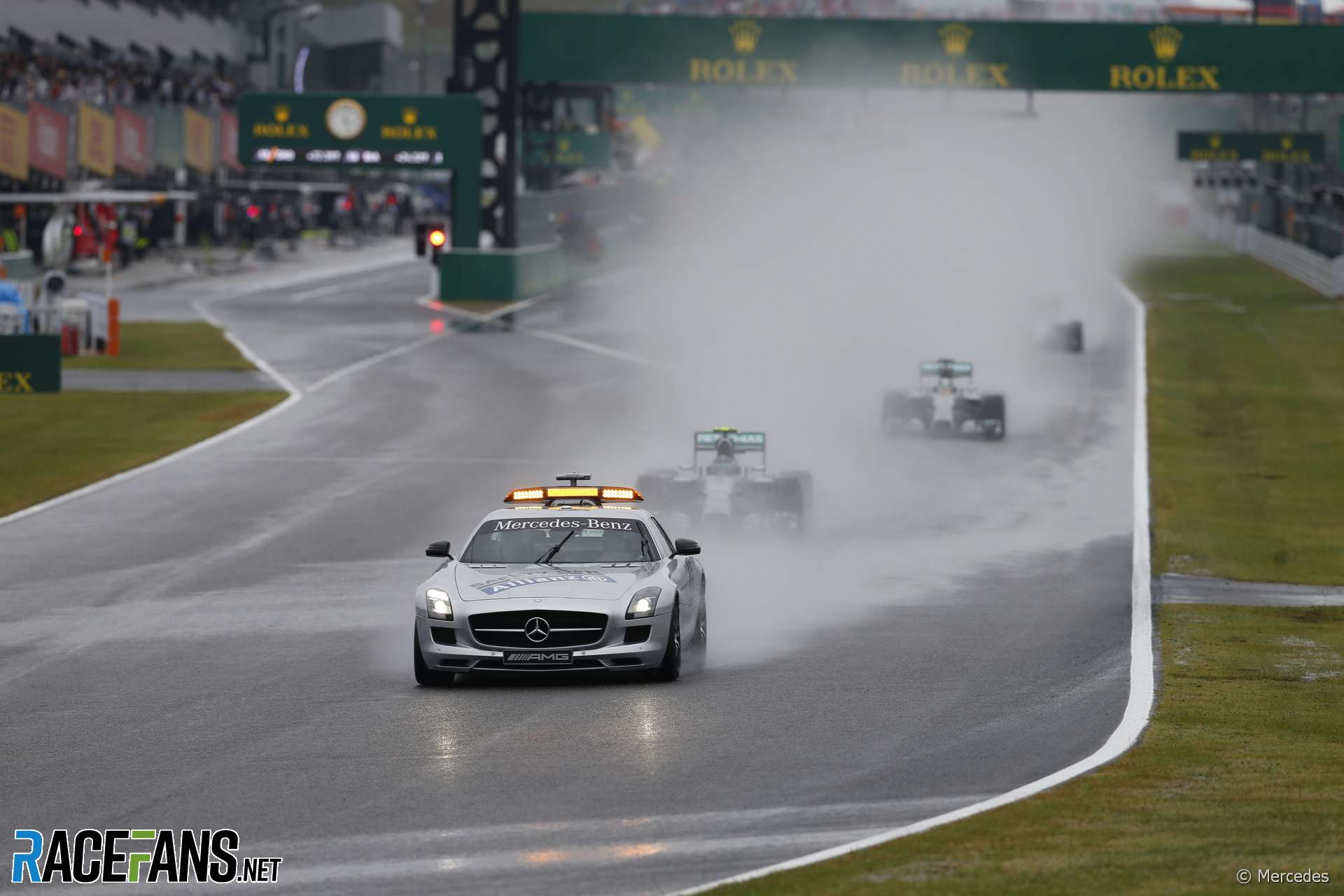 Mercedes could wrap up the constructors’ championship at Suzuka but this weekend’s race is under threat from a severe typhoon heading to the area.

Typhoon Hagibis is heading towards Japan from the south-west and could reach the main island of Honshu some time late on Saturday. Exactly where it will hit is hard to predict, but the size and power of the storm is so severe it is likely to have an effect on the weather at Suzuka, unless it makes a sudden deviation over the next few days.

If the conditions force a delay to proceedings on Sunday, the race organisers could quickly find themselves short of time to run the grand prix. The race starts at 2:10pm local time but sunset is due less than three hours later, at 5:09pm.

The last time the Japanese Grand Prix was affected by a typhoon was in 2014 (pictured above), when the race ran in very wet conditions due to Typhoon Phanfone. During the race Jules Bianchi crashed heavily and suffered serious injuries from which he later died.

The constructors’ championship could be decided this weekend. The only team left which can beat Mercedes to the title is Ferrari, and if Mercedes out-score them by at least 14 points the championship will be theirs. The only result which guarantees that outcome for Mercedes regardless of where the Ferraris finish is a one-two.

When, as is now almost certain, Mercedes eventually do win the championship, they will become only the second team in F1 history to win six in a row. Ferrari did the same between 1999 and 2005.

The fall-out at Ferrari

Ferrari have had to contain disputes between their drivers at each three of the last three races. And the situation seems to be escalating.

At Monza Sebastian Vettel felt Charles Leclerc had failed to hold position in qualifying. In Singapore Leclerc lost victory to Vettel because of the team’s strategy, which he queried on the radio. Then in Russia Vettel repeatedly refused, and eventually ignored, his team’s order for him to let Leclerc pass him in the race.

Ferrari have tried to keep a lid on the controversy. However Mattia Binotto’s insistence that they did not use pit strategy to put Leclerc in front of Vettel in Sochi leaves many unanswered questions about exactly how Ferrari is managing this increasingly fractious relationship.

Honda has only tasted victory at its home track twice, both courtesy of McLaren. Ayrton Senna won for them in 1988 and Gerhard Berger did the same in 1991.

But they’ve already powered Red Bull to two wins this year and have readied an upgraded power unit for their home event. But the RB15 drivers will need it to bridge the gap to Mercedes and Ferrari, which has widened since the summer break.

As well as sponsoring their home race, Honda will ensure a Japanese driver will participate in Japan’s round of the world championship for the first time in five years. However Naoki Yamamoto will only drive Pierre Gasly’s Toro Rosso during the first practice session, not the race.

Yamamoto has serious pedigree in his homeland and especially at Suzuka. He has taken five wins here in Japan’s Super Formula season, one of few championships which come close to F1-level performance, since 2013.

If you’re heading to Japan for this weekend’s race, we want to hear from you: