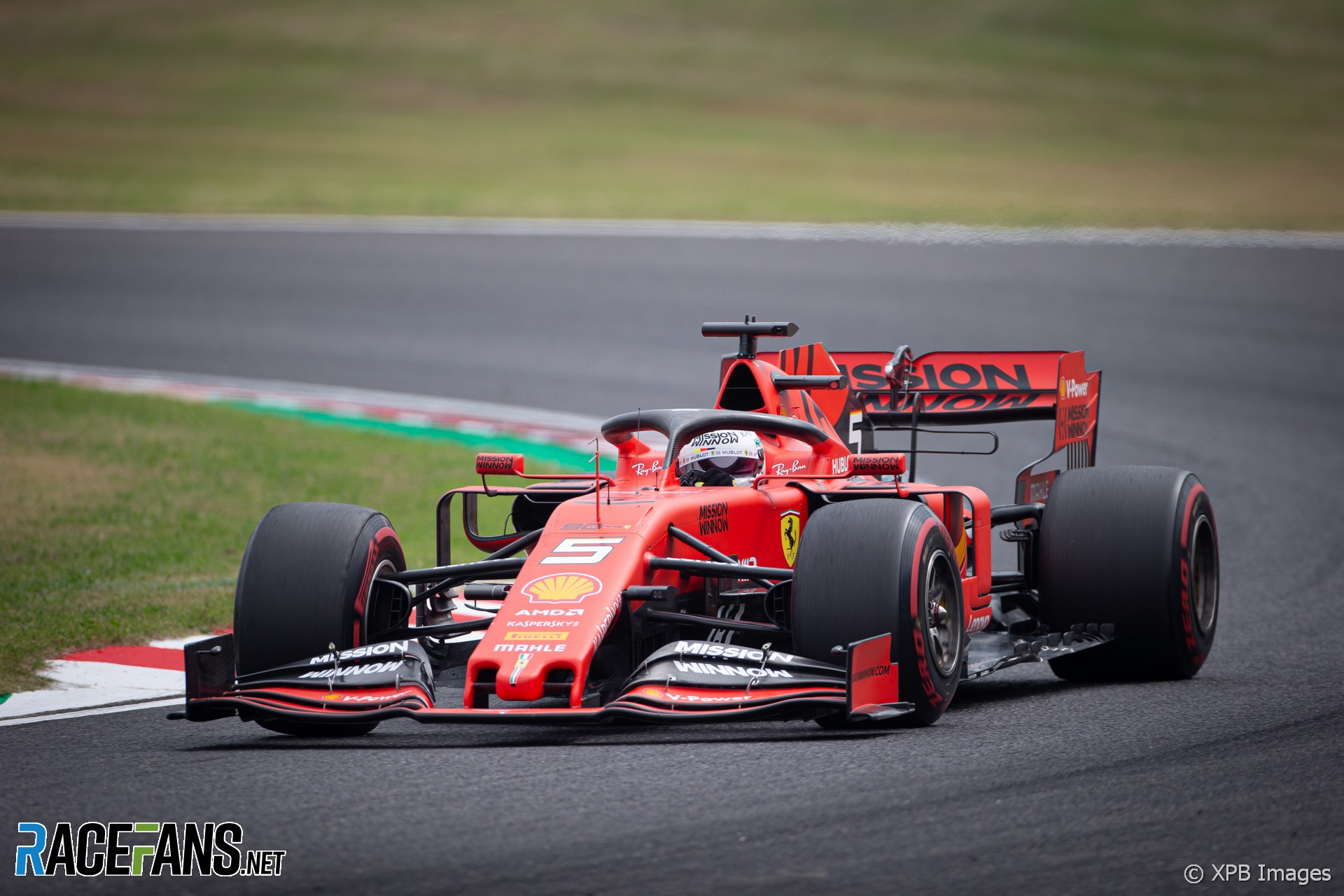 The Ferrari drivers relegated their Mercedes rivals to the second row of the grid a windy Suzuka in the aftermath of Super Typhoom Hagibis, which passed through the area yesterday. The conditions caught out several drivers and contributed to two crashes within minutes of the session beginning

The rain may have spared Suzuka on Saturday by the wind did not. Strong gusts throughout Q1 made conditions hazardous for drivers and caused two further delays due to crashes.

Robert Kubica as the first driver into the wall, understeering wide at the exit of the final corner. “It’s a fucking joke” he muttered as he climbed unhurt from his wrecked Williams, which the team had withdrawn from the last race due to concerns over crash damage.

Following an eight-minute delay the session resumed. But only a handful of midfield drivers had completed laps by the time Kevin Magnussen found the barriers at the same spot as Kubica.

The Haas driver also appeared to be taken out by the powerful and shifting blasts of wind. His VF-19 snapped into oversteer at the same point of the track and went into the barrier backwards. Unlike Kubica, Magnussen was able to drive back to the pits, but his car was too badly damaged for him to continue in the session.

When Q1 resumed again a queue of drivers were ready at the pit exit waiting to set their times in the 11 minutes left. All of them managed to, but the tight timings produced a few surprises. Among them was Daniel Ricciardo, after a sub-par run through the first and final sectors, failing to make the cut, while Sergio Perez was unusually out-qualified by team mate Lance Stroll.

Less surprisingly, George Russell’s Williams also progressed no further, despite having briefly held 15th. According to Russell, the gusts of wind felt so strong it was as his car’s DRS was opening.

All the front-runners opted for the soft compound tyres in Q2, and Hamilton led the way with a 1’27.826. Bottas was almost half a second slower than his team mate, which allowed the Ferrari drivers to separate them, led by Vettel. Bottas improved to second with his final run while Alexander Albon also moved ahead of the Ferraris at the end of Q2.

Both Renault drivers were doomed not to reach Q3. Nico Hulkenberg was told he had a “major problem” on his car after suffering a loss of hydraulic pressure on his second run. He headed for the pits just as the remaining runners came past to start their final runs.

Kimi Raikkonen’s first effort had been good enough for the top 10 but team mate Antonio Giovinazzi beat him on the final runs. Neither were quick enough to make the cut.

An excellent run by Pierre Gasly meant one of the Toro Rossos accompanied the two similarly Honda-powered Red Bulls into Q3 at the Japanese manufacturer’s home race. Stroll has one of the last to slip out of the top 10, the Racing Point driver losing out to Romain Grosjean, who brought some cheer to Haas with his Q3-making effort.

Bottas regained the initiative over Hamilton with their first runs in Q3. Despite a slight error at the chicane, he edged Hamilton off the top spot by a tenth of a second.

Then Ferrari showed their hand. First Leclerc hit the top of the times, sliding the back of his car through the final corner which caught out several of his rivals at the beginning of the session. Next Vettel stepped up, and a superb run through the first sector put him on course for a track record-breaking run of 1’27.22, three tenths of a second faster than his team mate.

Leclerc began his final run strongly, beating Vettel’s first sector time. But his team mate, running a few seconds behind him on the track, was unlocking even more speed from the Ferrari. Revelling in the headwind through the Esses, the ultra-committed Vettel beat Leclerc’s first sector run by a tenth of a second.

In sector two Leclerc found more time again, and here Vettel couldn’t quite match him. But Leclerc lost the initiative in the final sector, and fell short of beating Vettel’s first effort by four-hundredths of a second. Vettel, meanwhile, carried his advantage through to the end of the lap. “He was quite a bit quicker,” Leclerc reflected on the way in, “almost two tenths”.

In the final reckoning, Ferrari decisively eclipsed Mercedes. Bottas had the beating of Hamilton, by a mere nine-thousandths of a second.

It was even closer between the Red Bull drivers, who set identical times to within one thousandth of a second. Max Verstappen, who qualified ahead by dint of setting his 1’27.851 before Alexander Albon, complained the balance of his car was changing on every lap.

The McLaren pair continued the symmetry at the front, Carlos Sainz Jnr qualifying ahead of Lando Norris, followed by Gasly and Grosjean.