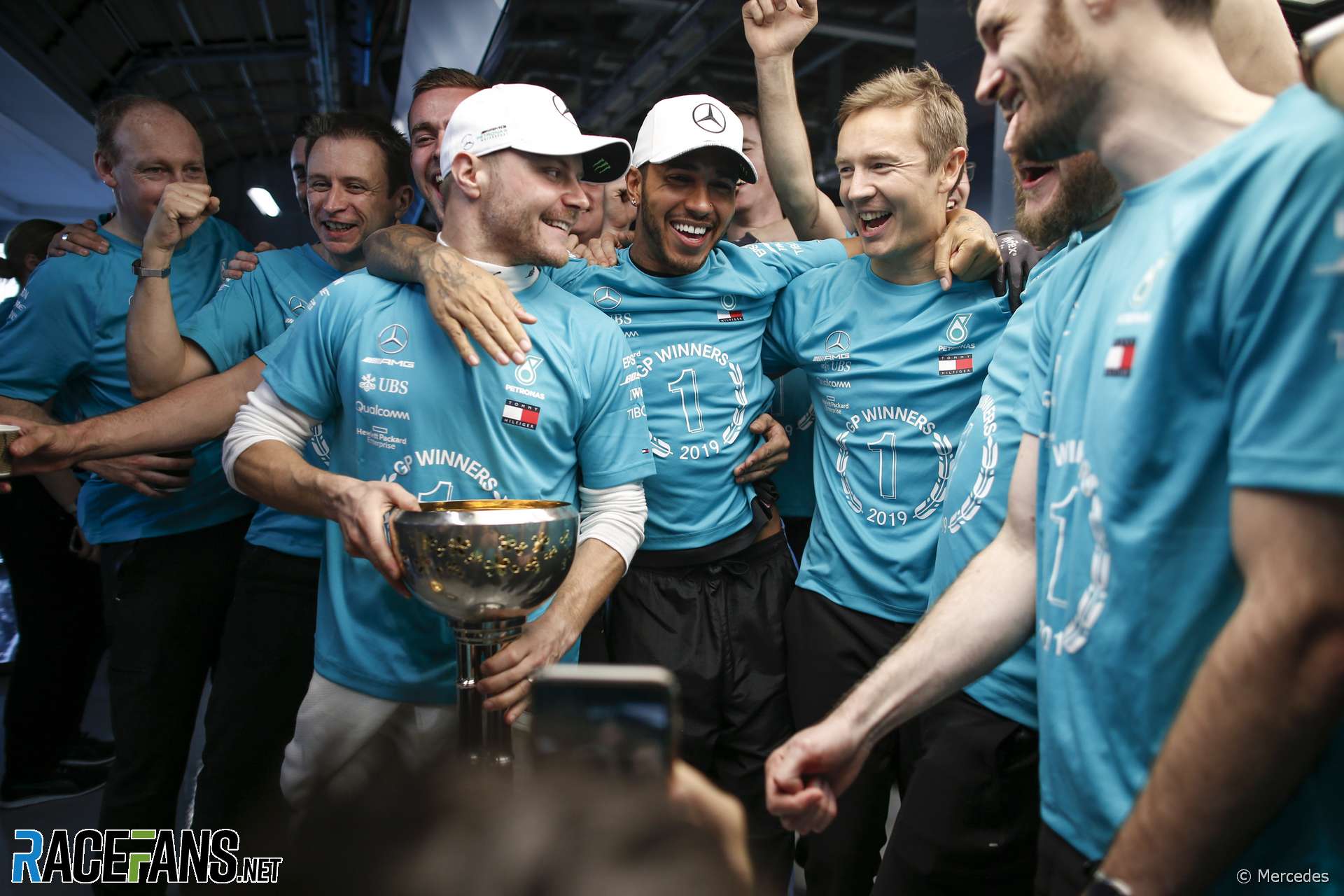 While we don’t yet know who will be the 2019 Formula 1 drivers’ world champion, we do know it will be someone who drives a Mercedes.

Valtteri Bottas’s victory in Suzuka yesterday means he is the only driver left who can prevent Lewis Hamilton from scoring a sixth world title. There are just 104 points available over the remaining races, and third-placed Charles Leclerc is 117 points adrift.

Last weekend Mercedes also put a lock on their sixth consecutive constructors’ championship title. This equals the record Ferrari set from 1999 to 2004. But Ferrari’s drivers did not manage a sweep of the available titles during that time – McLaren’s Mika Hakkinen took the 1999 crown.

Mercedes has therefore become the first team in F1 history to take a ‘sextuple double’, sweeping both championships for six consecutive seasons.

However the team will be well aware that the recent run of performance is not on their side. Japan was the sixth consecutive race without a Mercedes on pole position – the longest such streak since the last eight races of 2013 – and the fifth pole in a row for Ferrari. It ended a run of five poles in a row at Suzuka by Mercedes.

Sebastian Vettel took his fifth pole position at his favourite F1 track, though he remains three shy of Michael Schumacher’s all-time record. This was the first time in nine races he’d out-qualified Charles Leclerc, and ended his team mate’s streak of four poles in a row.

Alexander Albon scored the best result of his career so far with fourth place. After five races at Red Bull, he is now within nine points of the driver he replaced at the team, Pierre Gasly, who was in the seat for 12 races.

However Red Bull’s driver swap has created an opportunity McLaren are eager to take advantage of. Carlos Sainz Jnr led the midfield home for the fifth time this year at Suzuka and by doing so moved up to sixth in the championship, three points ahead of Gasly. If he stays there, it’ll be the first time since 2015 a driver from outside Mercedes, Ferrari and Red Bull has finished in the top six.

Will he do it? Since Albon joined Red Bull he has out-scored Sainz 48-18, and is only 12 points behind, so the odds are not in Sainz’s favour.

Finally, an error with the chequered flag signal meant the race result was taken from the 52nd lap instead of the full 53-lap race distance. This was good news for Sergio Perez, who crashed out of ninth place on what should have been the final lap, and got his position back as a result. It cost Nico Hulkenberg and Lance Stroll a point each.

This is the fifth time a race has accidentally been ended early. Three of these were within the past five years: Yesterday, Canada last year and China in 2014. It also happened at the 1985 British Grand Prix and 1978 Argentinian Grand Prix. Other early endings have usually been due to weather, the race time limit or serious accidents.