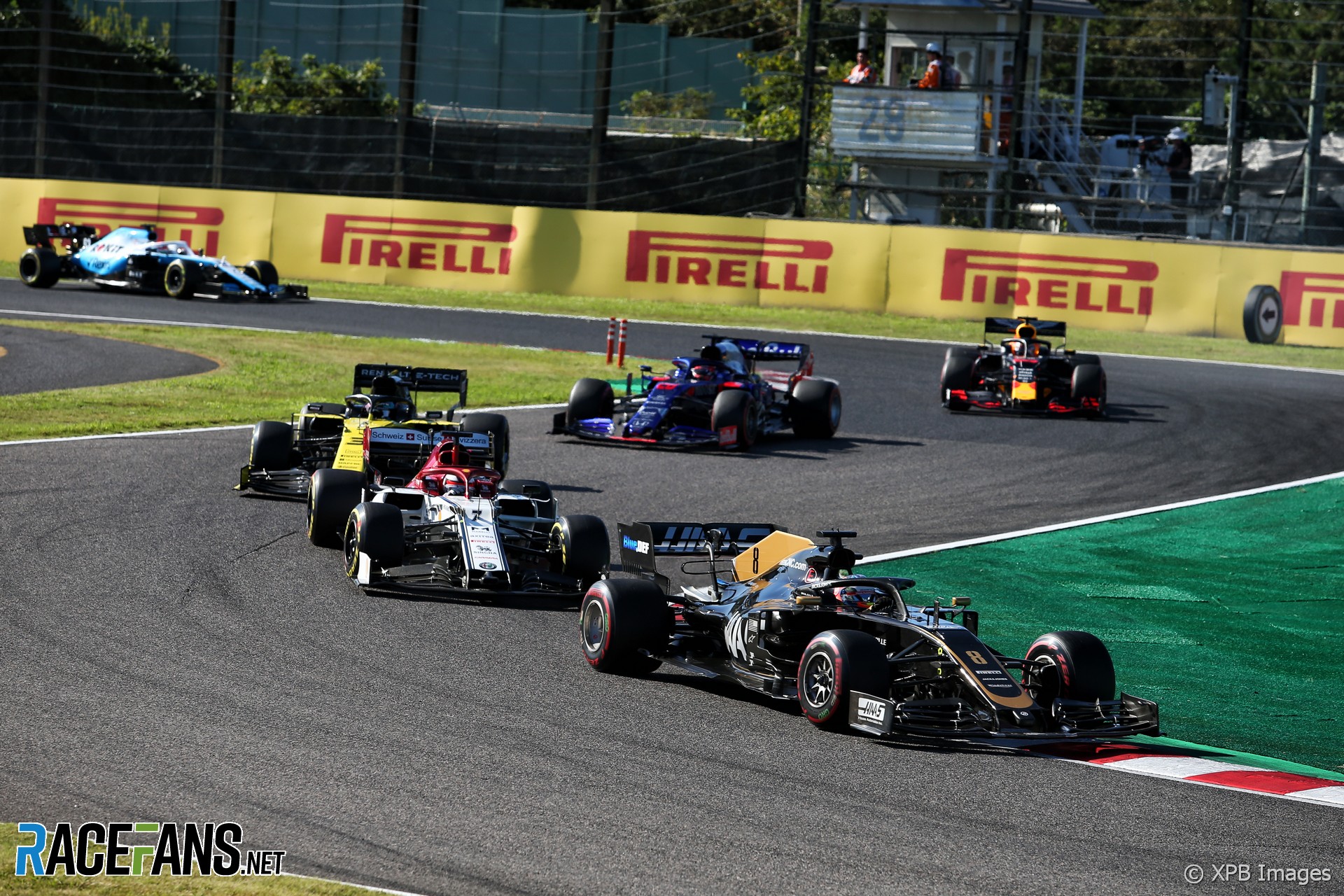 In the round-up: Romain Grosjean says he’s lost too many places at the start in recent races.

Grosjean fell four places to 14th on the first lap at Suzuka.

The start, first of all, I was behind Kevin [Magnussen] by turn one so it’s been two races in a row that we just don’t get any good start performance. We need to understand that because I don’t think there is much more I can do. So that’s something we need to work on.

Then initially we had some good pace. We tried a one stop fitting the hard but honestly really two really good overtakes on Giovinazzi and Russell on the outside of turn one-two that was probably the highlight of my race, had a lot of fun and then we we pushed hard, tried to go to the end but the tyres just died to the end so a bit of a shame.

Found myself a new nurse 👩‍⚕️

For more on allegations that @ferrari has found a way of burning 'leaked' intercooler oil, read here, first published on 1 October…https://t.co/Y8dS8lTPWS

Almost 100 Grand Prix deep – but which was Kevin's no.1 🤔#KMag100 pic.twitter.com/jkhSQhrmqS

https://t.co/JJxdGmEfIc money-driven on-line obsessed owners of nearly all motor sport media show contempt for the printed word with #Autosport at £10.99. Motoring News, Autosport + other cuttings can be priceless Will writers in 2059 be able to research Lewis Hamilton like this? pic.twitter.com/jSLlW5pmdY

"A significant upgrade to the front and rear bodywork of the current Gen 2 car is currently in advanced stages of being designed and kits are likely to be manufactured in the first quarter of 2020 for supply to teams next summer."

Guenther king of testing for BMW, 21 cars separated by a second (Formula E)

"Guenther's performance comes one year after BMW dominated testing with Antonio Felix da Costa and Alex Sims behind the wheel. Despite the strong start, the marque lost its lead after round two in the 2018/19 season. "

"Although Renault says it is confident it can defend its case ‘vigorously’ this has potentially very serious consequences if found guilty."

"Formula 1also provides a venue at which the companies can entertain policymakers and corporate guests, as well as invite social media influencers to be seen with e-cigarette products."

"We are a works team so we have an opportunity to focus on the whole package, not just half of it. The objective is always the fastest car. Some groups focus on performance, some will focus on reliability, some will focus on specific aspects of design like cooling or exhaust, which touch both sides and are probably more involved in the performance aspects, and then mechanical integration."

Would it achieve anything meaningful for Lewis Hamilton to stop racing in the name of reducing his carbon footprint?

He’s in a very similar position to high-profile musicians who join climate campaigns. Their lifestyle (in their case, touring) makes them painfully easy targets for dismissal and accusations of hypocrisy. Those opposed to whatever protest is taking place pull these kinds of people aside and (figuratively) beat them with a stick, over and over, in the hope that doing so will ruin the credibility of the entire movement. In the minds of some people, it does just that.

That makes them good and bad for these movements. On one hand they raise the profile of the cause and potentially influence their fans to become involved. But on the other they provide an open goal for anyone who fancies taking a cheap, effective shot. They’re a gateway to deploying the ‘do as I say, not as I do’ attack, which is particularly difficult to directly defend against.

But Bono stopping touring, or Hamilton stopping driving, or Sherlock stopping advertising cars, or Prince Harry catching a hot air balloon, would be tiny drops in an ocean of whatever height it happens to have risen to when those things happen. They’re cogs in a machine with multiple redundancies and what they do as individuals doesn’t really matter. I dislike misinformed, virtue-signalling preaching by ‘celebrities’ as much as the next person, but I welcome genuine voicing of concerns from famous people who have a platform and something they truly believe in.

So I hope he doesn’t stop racing, because as an F1 fan I want to see the best drivers racing for as long as possible. And I also hope he doesn’t stop saying what he thinks about stuff, especially stuff he’s researched and developed a proper interest in.
Neil (@Neilosjames)

19 comments on “Grosjean says he must improve his starts”