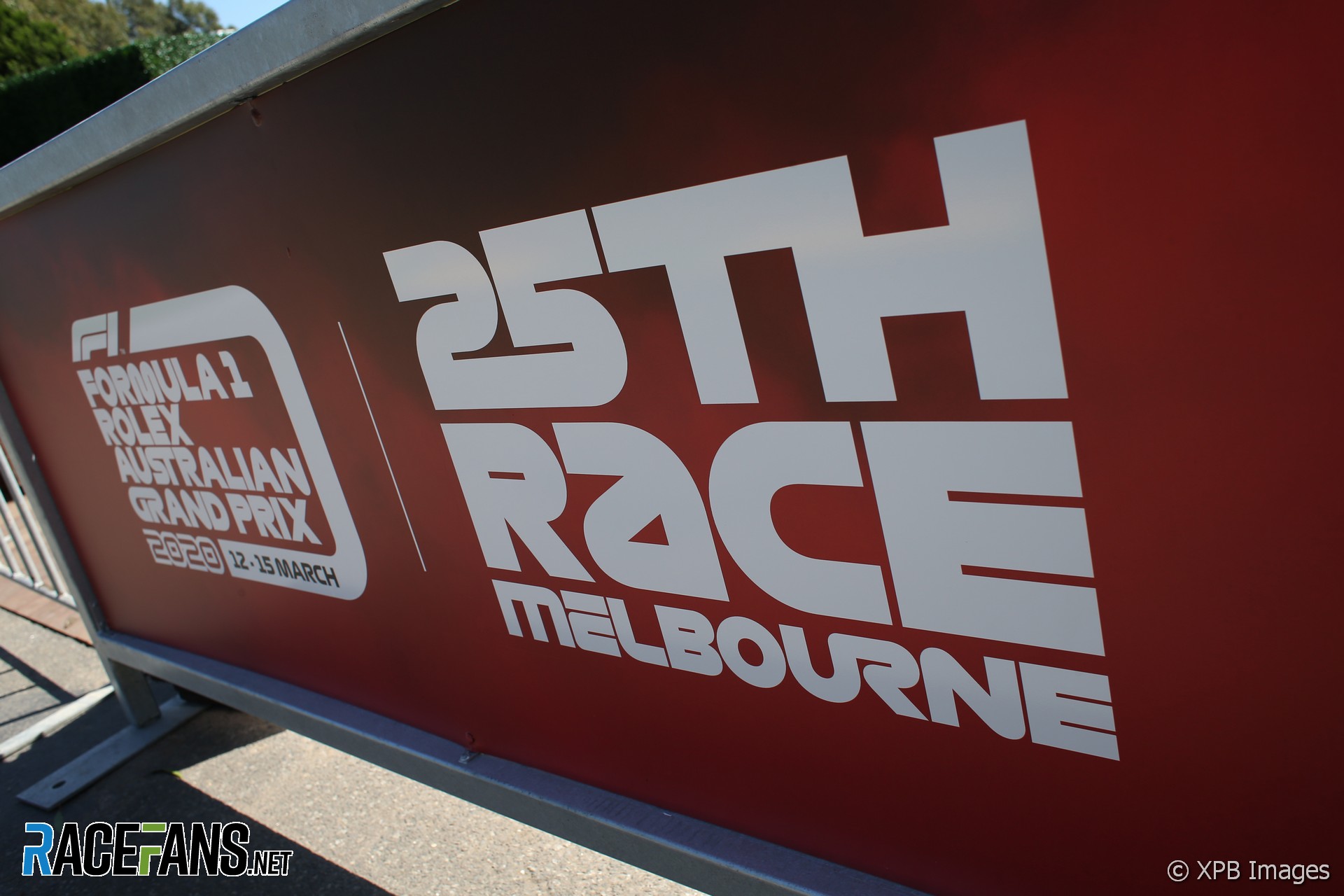 The 71st running of the world championship is due to begin at Albert Park in Australia this weekend. But could F1’s presence in Melbourne do more harm than good due to the spread of Coronavirus?

Following the shortest amount of pre-season testing to date the teams, many questions hang over the performance of the teams. And this being F1, there is no shortage of political intrigue either. Here are the top talking points for this weekend’s race – give us your views on them in the comments.

Should F1 be racing?

While ever more sporting events and major races in other series have been postponed or cancelled due to the threat of Coronavirus the Australian Grand Prix promoters have made it clear: The season-opener will go on as planned.

This followed a significant comment from Formula 1 motorsport director Ross Brawn, who claimed that if any team is unable to race due to Coronavirus restrictions, a ‘world championship race’ cannot be held. That leaves the door open for non-points races to be run, but the expectation at present is the race will go ahead with all 10 teams. Whether any of them have been compromised by Coronavirus restrictions remains to be seen.

The Bahrain Grand Prix organisers have already announced that their race will take place ‘behind closed doors’. But the race in the desert attracts a much smaller crowd than this round, which saw a six-figure attendance on Sunday last year. F1 has issued updated guidance on how it will try to contain the risk of the virus being transmitted at its events.

Formula 1’s great strength is the international community it draws on to build and race its cars But that very global nature is its great weakness when it comes to a virus like this, and many will inevitably be questioning whether it’s wise for the show to go on at the moment, and how much longer it can expect to.

For now the race is scheduled to go ahead but the premier of Victoria, of which Melbourne is the state capital, has indicated sporting events could be played behind closed doors if there is a rise in person-to-person transmission of the virus. The first such case was reported in the state yesterday.

FIA and Ferrari vs the rest

In an ordinary year, the seismic news that seven teams had furiously criticised a private deal between the sport’s governing body and its most famous team would be far and away the leading story. The rare intrusion of the ‘real world’ into the F1 paddock bubble has changed that, but make no mistake, the seven teams are livid over what emerged at the end of testing.

The FIA announced the findings of their investigation into the legality of Ferrari’s power unit will remain confidential. Ferrari and their customers can expect intense questioning this weekend, but the real action will begin once the one-week deadline imposed by the seven teams on the FIA and FOM for a response expires. This is unlikely to be settled quickly.

The other dimension to this is how competitive will Ferrari be this weekend, and whether any lapse in their strong late-2019 form will be pinned on changes to their power unit.

Mercedes undoubtedly had the most impressive pre-season, recording the most laps and the fastest lap time across both tests. And they left everyone in the paddock speechless when their newest innovation, Dual Axis Steering, was discovered.

The only glimmer of hope offered to their rivals was the less-than-spotless performance of their power unit. Lewis Hamilton stopped once during the test and Williams suffered a series of problems which they said Mercedes were responsible for.

Ferrari team principal Mattia Binotto played down their chances. It would not be surprising to see the red cars start the season third among the ‘big three’ teams.

How close will Red Bull be? They chased Mercedes home at this race last year and Honda have said they expect to be podium contenders everywhere this year.

Once the action begins on Friday we should get our chance to see Mercedes using their curious new DAS system. At the moment, it is unclear how much of an effect the device has on Mercedes’ performance, but increased aerodynamic efficiency down the straights and better tyre wear are just a couple of the advantages that it could create.

We should learn more from observing how they use it in competitive sessions. Do they intend to use it to manage tyre pressures on qualifying out-laps? Or help tyre management during race stints?

The legality of the device may come into question. A protest from one of Mercedes’ rivals is possible, but the team insist that they kept the FIA briefed and therefore expect no problems. There are rumours Red Bull could protest. Mercedes have been conservatively-minded in this regard previously. Faced with questions over the legality of their vented rear wheels late in 2018, they chose not to run them rather than risk a protest.

Will ‘Pink Mercedes’ lead the midfield?

Mercedes aren’t the only team potentially facing a legality headache. ‘Pink Mercedes’ – aka Racing Point – attract scrutiny when they turned up at testing with a car bearing more than a passing similarity to last year’s Mercedes W10. Throughout the six days of testing the car demonstrated impressive reliability and pace. But some of their rivals aren’t happy with what they’ve seen – check out the RacingLines column later today on RaceFans for more on that.

Expect McLaren and Renault to be their primary challengers. Renault were the quickest midfield team in testing, though Racing Point seemed able to turn out a quick lap whenever they chose. Both McLaren drivers weren’t completely happy with their package – and expressed some reservations about their pink rivals as well.

Ricciardo is yet to officially score a podium at his home race – he stood on it in 2014, but was stripped of his finish due to a technical infringement. He has targeted podiums with Renault in 2020 and there’s no better race for him to achieve one.

Following last year’s race Ricciardo said he wanted to reduce his commitments at his home race as he felt it was detracting from his performance. Will he strike a better balance this time? The race can hardly go worse than last year, when it was ruined before he reached turn one after he broke his front wing.

Who will bring up the rear?

Williams were far and away the slowest team last year. The new car is a clear improvement, but George Russell expects them to still be at the back.

That may prove pessimistic, however, particularly as Haas did not look in great shape during testing. The Ferrari customers are hoping they have found the remedy to the tyre overheating problem that plagued their race pace last season.

Historically, Haas have performed extremely well at Albert Park since their first ever race in 2016 when they finished sixth. But the pressure on them ahead of their fifth season is huge following last year’s disappointment, and rumours own Gene Haas could pull the American team out of the sport entirely.

Are you going to the Australian Grand Prix?

If you’re heading to Australia for this weekend’s race, we want to hear from you:

Who do you think will be the team to beat in the Australian Grand Prix? Have your say below.

41 comments on “Should F1 race on despite Coronavirus? Seven Australian GP talking points”